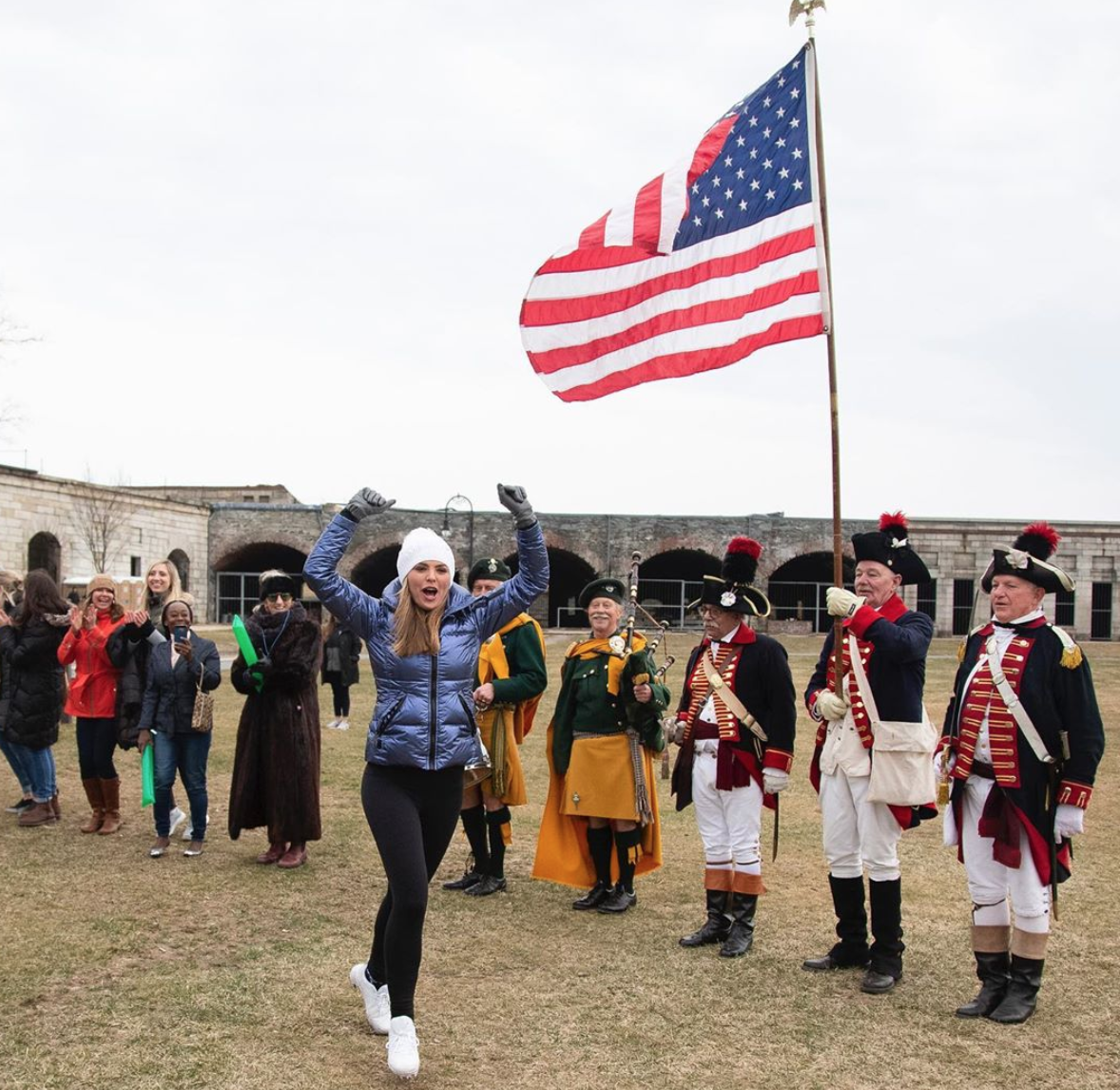 The Best ‘Bachelorette’ Recap You’ll Ever Read: Battle Of The Lukes

Hello, and welcome back to your regularly scheduled Bachelorette recap! I think I speak for all of us when I say that last week’s episode was absolutely wild—and I’m not even talking about Cam’s sob story! First, Hannah tried to win the men over by putting a group of them, whose compassion for the female anatomy probably goes about as far as saying “that sucks” when an ex-girlfriend complained about her cramps, through simulated labor and  breastfeeding. Then she decided to forgo the one-on-one date entirely in favor of lying in bed sick. Iconic. Finally, in a move that shocked absolutely no one, Hannah sent Cam packing at the rose ceremony. Apparently she didn’t love his retelling of Oliver Twist when she asked him to tell her a little bit more about himself. Sad!

Moving on. This week, Chris Harrison lets the men know that they’ll be allowed to actually leave the mansion! This is great news for some of them, especially the ones who have only traveled about as far as the parking lot when it was decked out in bales of hay and kegs of Keystone Light for Hannah’s rose ceremony that one time. I’m happy for them!

They’ll be going to Newport, Rhode Island, and they act as if Chris just told them they won an all-inclusive trip to Croatia for Yacht Week. Sighs.

Okay, wait why are the men staying in Rhode Island if the first one-on-one date is going to take place in Boston? Why not just stay in Boston? Which intern f*cked up and forgot to book the hotel? My money’s on Chris Harrison’s least favorite nephew. Why else would he be offscreen so much this season if not because he’s riddled with shame and embarrassment? It can’t possibly be because he doesn’t give a sh*t anymore. Nope.

Jed gets the first one-on-one date this week and I hope for all our sakes that he does not attempt to sing. I can’t take one more karaoke audition from him. I just can’t.

Hannah begins the date by absolutely butchering American history. She’s like “no taxation without representation…maybe. Idk. I saw it on a bumper sticker once!” Jesus Christ. I guess that’s just Alabama’s public education system at work, people! Considering a friend of mine, who also hails from Hannah’s home state, once told me that she doesn’t believe dinosaurs are real because her school just didn’t cover them in history class and so, therefore, there’s no scientific basis for their existence, I’m honestly surprised Hannah even knew there was a Revolutionary War to begin with. You’re doing amazing, sweetie!

HANNAH: Today is all about fun. Fun and America.

Why do I have a feeling that’s about to be Trump’s campaign slogan in 2020?

Okay, I’m actually really loving Jed and Hannah together. He seems very down-to-earth and is much more palatable to me now that he’s ditched those wide brimmed hats he was always wearing.

Just when Jed was starting to think their entire date was going to be one long Halo Top sponsorship, Hannah surprises him with a private basketball practice session with the Boston Celtics! I feel as if the coolness of this date might be lost on ole Jedediah. He doesn’t look like the type to be into organized sports. Maybe horse shoeing. Or brewing his own beer out of recycled potato skins.

I like that this young, hot basketball player in the prime of his career is giving Hannah advice on how to be in a monogamous relationship as if he probably doesn’t take a page out of the Tristan Thompson cheating handbook. K.

What started out as a beautiful date and a promising relationship quickly crashes and burns when Jed casually announces that he’s only on the show to advance his music career. JED. You can’t just say these things out loud!! Save that for your first FabFitFun box unveiling post-production like everybody else does! MY GOD it’s like he knows nothing about show biz.

Wait did she just THANK HIM FOR HIS HONESTY?! Hannah, the man just said he’s only on the show for Instagram likes and you’re going to just hand him a rose like that? Why are we not flogging him in the town square?? WHERE IS THE JUSTICE.

JED: All I need is you

Mark my words, kids, that will be the title of his first hit single. Mark. My. Words.

Fast forward to the group date, where the men will be playing a game of rugby, though Luke is already treating it like he is William Wallace and this is Scotland’s last stand. K.

Okay, Hannah’s aggression during the rugby match is freaking me out. She’s all “today’s about having fun!” but then also she’s like “somebody better f*cking bleed.” Hannah gets her wish, because some rando in the house takes a hit and dislocates his shoulder. She practically orgasms at the bloodshed. Then there’s JPJ who looks like he’s one wrong shove away from calling his daddy and getting the family lawyers down there. Gotta love that kid.

I love that no one will just come out and say Luke is on steroids. They’re all like “he’s aggressive” or “he’s really into the game.” The man is practically foaming at the mouth! I think it’s safe to say there’s something else going on here. Like, dude, you said you played high school football. Chill.

Cut to the cocktail portion of the evening where the mood is tense. The other men are pissed at Luke for shoving that random guy during the game as well as Luke S. I love how production puts all these dudes on steroids into physical challenges where they are forced to assault each other, and then gets them to act surprised and outraged when people have to go to the hospital. Come on.

Luke P plays it smart and immediately seeks out Hannah to let her know that he’s not a psychopath, he just acts like one sometimes during very low-stakes recreational sports games. Lol. Got it.

LUKE P: I don’t think you can trust Luke S. He’s always talking about his brand.

HE’S ALWAYS TALKING ABOUT HIS BRAND. I’m crying. Yeah, him and every other guy on the internet just looking for a “chill girl” to date! What’s your point, Lukie?

Luke S, who, according to his bio, worked in politics, handles this new development with about as much grace and maturity as a kindergartener who got his blocks stolen.

While the Lukes are shaking their fists at each other and exchanging insults straight from the script of a Hello Dolly!, Hannah is off canoodling with Peter The Pilot and I am not okay. Mostly, because Peter is my boyfriend and it’s rude that he would cheat on me like this.

The night ends with Garrett getting the group date rose despite the fact that I do not remember him speaking words this entire episode. But he is tall and hot and that feels like criteria enough these days to receive a group date rose.

First of all, I didn’t even realize this was a one-on-one date because Hannah is just casually weeping in a corner. I, mean, this is literally my mood always on a date but MY GOD Hannah you’re the Bachelorette. Suck it up!

Tyler shows up and is like “Beautiful morning, huh??” Never mind that your date is snotting into her coat sleeve, just continue commenting on the cloud coverage, Ty!

TYLER:  Did you get drunk again?

Hannah’s like “Sorry I’m no fun today, I’m just so emotional,” and Tyler doesn’t even blink. First of all, if they were on a date in the real world and she showed up all weepy like that Tyler would be gone in three seconds flat. I should know because I have shown up to a date in similar form, and let me tell you friends, that guy didn’t want to see my highs or my lows, just the quickest way to the exit.

Tyler talks her into carrying out the rest of their date. They go fishing and it’s almost as cute as the story he tells later about watching The Bachelorette with his dad when he was sick, and how his dad was the one to encourage him to be on the show. It’s very sweet. My mother says something similar when she watches this show with me, but replace “go for it!” with “you’ll be disowned.” Potatoes, pah-ta-toes.

… i was made for you ? – @tylerjcameron3 @alabamahannah

At long last we reach the rose ceremony, and the Lukes are still battling it out for the Iron Petty Throne. Luke is still squeezing his tiny fists as the rest of the house calculates how to quietly murder him and dispose of the body before Hannah hands out the roses. Good luck with that guys!

Elsewhere, Hannah and Peter canoodle on a couch and honestly their relationship is just making me angry at this point. He’s like “I just believe in being really direct and intentional so would you be my girlfriend?” PETER SHOULD BE MINE WTF. Like, who says stuff like that?? He is a goddamn unicorn.

Okay, is it just me or does Luke S seem like he is one of those aliens from Men in Black wearing a skin suit? He does not speak like someone who has been human for a long time. And considering he is a POLITICIAN, he should be better at this. No wonder he had to leave DC and start a tequila company.

Hannah calls the Lukes in to get to the bottom of the drama, and it feels a bit like they’ve been called to the principal’s office.

HANNAH: Luke, can you tell me what happened here?
LUKE P:

This should go well! No rose ceremony tonight because apparently my time means nothing to the overlords at ABC. It looks like we’ll have to wait until next week to find out which Luke will prevail. My money is on the one Hannah has already given an over the pants handie to. Sorry, Luke S, looks like you’ll have to go back to pimping out your tequila business on IG like the rest of the plebes! See you for next week’s Bachelorette, betches!