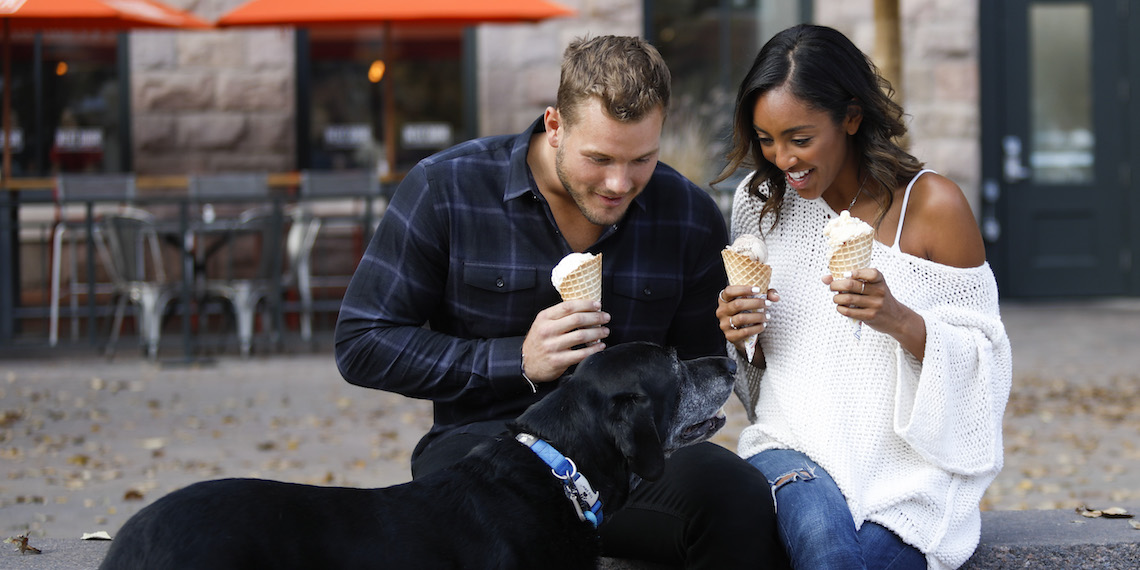 Welcome back Bachelor fans to another week where Colton didn’t jump the fence because that is definitely all I’m watching for at this point. Look, I appreciate that ABC is just trying to build some tension in what would otherwise be a very boring season of The Bachelor, but I’ve had a day, and was really hoping to watch someone emotionally self-destruct for my viewing pleasure. Is that too much to ask for?? Sighs. Moving on.

This week the crew is headed to Colton’s hometown of Denver, and we know this because Colton talked about it when he recorded another sad, handwritten entry of his vlog. Seriously, what is with the home movie stuff here? ABC spends a disgusting amount of money on production every season and I feel like half of this season has been recorded on Colton’s iPhone.

Colton is still at an emotional crossroads over the truth bomb Katie left him with at the last rose ceremony. If you’ll recall last week, not one, not two, but THREE WOMEN told Colton he’s basically screwing himself with the women he has left on his season.

COLTON: *chooses only hot blondes whose combined age is second semester college senior*
ALSO COLTON: Why is this happening to me?
ME:

Cassie’s like “last week someone told Colton that there were girls here who aren’t ready to be married, which is so false.” Says the girl who is currently wearing a top from Forever21. Please. Spare me your lecture, honey.

Meanwhile, Colton spends some time getting advice from a person who also went through the Bachelor process and came out  single and alone: Ben Higgins. Ah, now I see where the budget went for this season, bringing back this reject. First of all, WHY is Colton even getting advice from Ben? It’s not like Ben even has a successful Bachelor story! Second of all, why do I feel like Colton is about to ask him how long he’s supposed to leave it in at the fantasy suite?

This week there’s going to be three one-on-one dates and a group date. Tayshia gets the first one-on-one date because she is not blonde and is old enough to legally rent a car, so I guess Colton wants to at least pretend like he’s considering her for our sake. It’s cute that he still thinks we give a sh*t.

Lol. Okay, who else thinks Colton rented out that dog for their date? I’m pretty sure Sniper was a yellow lab when Becca went home with him last season. Colton, that dog is an imposter!

For their date, Colton wants to show Tayshia all that Denver has to offer, which is apparently an ice cream shop and the food court at the mall. Seriously, where is this heart-to-heart they’re having taking place? In between the Dippin’ Dots and the Sbarro Pizza?

Cut to the house, where Cassie and Caelynn are freaking tf out over Tayshia’s date. They think she’s going to throw them under the bus for not being here for the “right reasons”, which is absolutely what she does. Tayshia tells Colton that Cassie and Caelynn are only there because they want to be the next Bachelorette. You mean to say that the adult woman who still competes in pageants and the girl who’s already been on one reality tv show before coming on this one might only be in it for the Instagram partnerships?!

Tayshia starts telling Colton a little about her family, and it’s clear that her dad is 100% going to despise Colton if they meet next week. She’s like “it might be tough at first” and it’s like, Tayshia, Colton was scared of a 5’3 former Miss Weiner, Arkansas, you really think he’s going to make it out of that meet and greet without sh*tting his pants? I don’t think so.

I just vomited in my mouth a little. But I guess Tayshia is into it because he gives her the rose, which is good for me because I’m looking forward to watching Colton wet himself when he meets Tayshia’s dad next week. Should be a good time!

Caelynn also gets some alone time with Colton this week. For their date, he takes her skiing. FYI, Colton, skiing is actually something Denver has to offer unlike that tour of Auntie Anne’s you took Tayshia on. Bravo, you’re learning.

I will say Caelynn looks amazing in her ski gear. If someone asked me to show up on national television wearing six layers of clothes I would look less like a snow bunny and more like that girl who turned into a blueberry at Willy Wonka’s factory.

Colton mentions Tayshia’s concerns to Caelynn and it’s like how FUNNY that he’s having this talk with a girl who supposedly said she wants to be the next Bachelorette when she is COINCIDENTALLY the frontrunner to be the next Bachelorette. Lol. The look on Caelynn’s face rn is all but screaming “did you talk to my producer about that because I thought those conversations were private.”

Honestly, she’s just mad because she needs to at least make it to hometowns to be considered for Bachelorette, and Tayshia is really jeopardizing that for her. I see right through you, girlfriend.

Cut to the cocktail portion of the evening. Colton is like “I need more from her this week” as if her baring her personal trauma two weeks ago isn’t enough for him. Like, what more do you want this girl to share with you??

CAELYNN: I’ve shed so many tears over you
COLTON: You shed tears for me?

Why do I feel like he’s going to go home and beat one out to that statement?

Colton gives Caelynn a rose, so she’ll be going to hometowns as well. He thinks that she’s ready to get engaged because she said it and with a straight face and everything. Oh, Colton. You stupid f*cking oaf. You deserve the girlfriend who’s contractually obligated to stay with you for 2-3 months you’ll get at the end of this.

Back at the house, Caelynn tells Cassie about the Tayshia backstab and Cassie looks piiiissed. How DARE Tayshia try and sabotage your Sugar Bear Hair deal, and when you’ve let Colton feel you up for the last three episodes and everything!

CASSIE: Are my words going to be twisted too??

If by “twisted” you mean “taken verbatim from your mouth,” then you f*cking bet they are, Cassie!

Alabama Hannah gets the next one-on-one date and Colton picks her up in a $90k car?! HE’S SO GENUINE YOU GUYS. So down to earth and chill.

I guess Colton ran out of fun Denver things for Hannah to do because he just takes her to his house. Hannah looks so excited about meeting his parents but I sort of feel like this is the kiss of death for her. It’s never good if they meet the parents before the final two.

Okay Colton and his dad look exactly alike except his dad actually looks masculine. Honestly, Mr. Underwood, you can call me!

Also, I love that he’s getting advice on how to have a successful marriage from a guy who’s been divorced. I can’t wait to see how this advice works out for you, Colton!

OMG. IS HE SENDING HER HOME?? I don’t get Colton. Hannah is legit the only girl to admit she has any feelings for him other than mild attraction and so he sends her home?? Honestly, I’m done with you, Colton.

The last group date of 2019 is here and it is tense. Cassie, Hannah G, Kirpa, and Josie Grossy are all fighting for the last two hometown spots. Colton decides that there’s no better way to break the tension than by taking the girls to tweetsie railroad! It’s funny that’s the exact same ploy I used when the two girls I used to babysit would fight, but okay.

Okay, how many times is Colton going to get dumped this season? Josie Grossy sends herself home and this is just so the opposite of The Bachelor. So, what? They’re all just gonna dump him and he’s stuck with whoever is left at the end? Like, is this The Bachelor or a week of me going on Hinge dates?

Colton confronts Cassie about the commitment rumors and she can barely string together a coherent sentence to defend herself. She’s like “there’s no truth to those rumors except don’t check the dailies, k?”

I will say she’s saying all the right things, not that it’s going to take much to convince Colton to keep her. She’s like “I wouldn’t bring you home if I didn’t feel this was real” which is basically code for “my sister is trying to be an actress and you coming into my house would really go a long way to getting her a SAG card.”

Moving on to the cocktail portion of the evening. Colton immediately decides that Hannah G looks amazing and apparently that’s enough for him to want to meet her family. He gives her a rose. Okay, is it just me or does Hannah G just embody the idea of “sit still look pretty.” Like I cannot believe this girl has made it all the way to hometowns when she has shown zero personality, barely spoken any words, and gotten involved in no drama. I’m astounded.

Okay WHAT. Is Caelynn seriously going to CRASH their date rn and help out her competition? This right here is why you placed but didn’t win at Miss America, Caelynn!!

Caelynn gives a very vague speech about following your heart and it’s exactly the excuse Colton was looking for to send Kirpa home without looking like a piece of sh*t, so he does.

And that’s a wrap for this week, kids! ABC didn’t even attempt to tease the fence jumping scene for next week’s episode which means we have at least two more weeks until someone has an emotional breakdown on our screens and I’m not pleased AT ALL. But then again, what else is new?