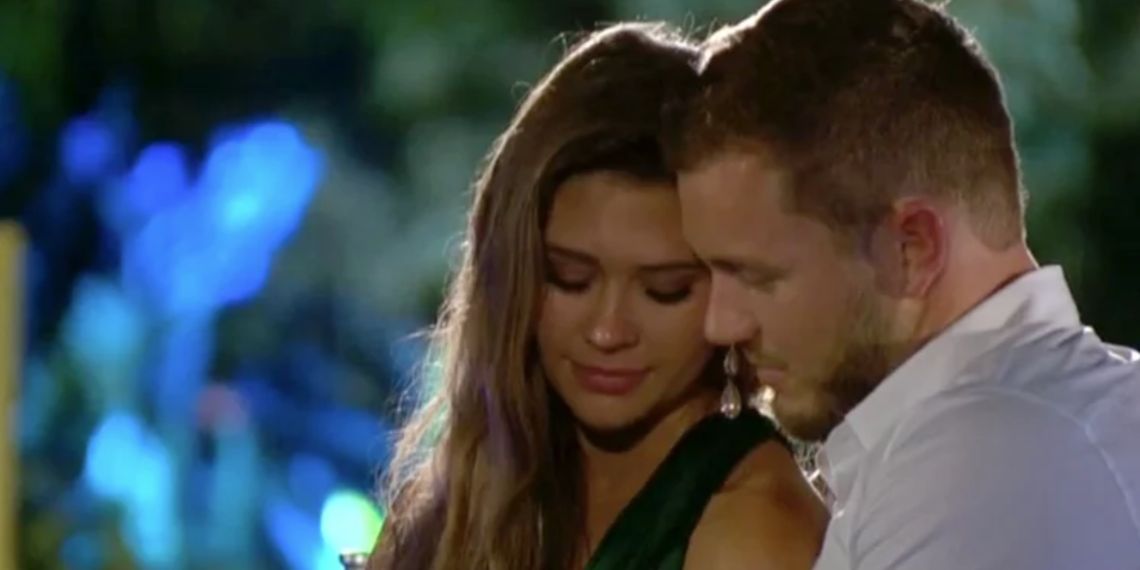 Welcome back to the best Bachelor recap you’ll ever read, according to me and the select few friends I’ve strongly encouraged to endorse me in the comments section. I’m just going to jump right into the recap this week because, y’all, it took a dark turn. Normally when I watch this show my emotions range from “mildly entertained” to “looking up how to get away with arson in LA” but this week was a little bit different. I felt things that I did not think my cold, dead heart could ever actually feel. Like, I may have cried a little. And not even just because I ran out of wine!

We’re starting this week off strong already. It’s three minutes in and Chris Harrison is already throwing insults at the most emotionally fragile girl in the house: Alabama Hannah.

CHRIS HARRISON: How are you feeling about last week, Caelynn?
ALABAMA HANNAH: Um, my name is Hannah…

CHRIS. MY GOD. He definitely just got a bonus for mixing up their names on purpose. I hope your new timeshare in St. Lucia was worth it!

This week the ladies are headed to Singapore! I guess none of the contestants have any outstanding issues with the law this season and are actually allowed to travel outside of the United States. I’m pretty sure at this time during Becca’s season the crew was heading off to the exotic and enchanting locale that is Pittsburgh, Pennsylvania, so, like, that’s where the bar was at. They’re already exceeding my expectations as to how this season would go. Brava, ladies.

Lol they’re staying at The Fairmont?? This is a far cry from the Crazy Rich Asians fantasy I’m sure Colton was picturing when production told him where they were going. You know that bish loves a good rom-com.

Tayshia gets the first one-on-one date and I’m shocked because I literally have no idea who this girl is. Is she one of the young ones or the old ones? And by “old” I mean of legal drinking age but still legally allowed to be on her parents’ insurance.

I love how Colton is like “I’m not sure about her” and then decides the only way he’ll be able to find out is by forcing her to jump off a bridge. They’re going bungee jumping for their date, and this is the stuff of nightmares. I absolutely do not trust that ABC wouldn’t “accidentally” forget to buckle something in an attempt to get better ratings.

Jesus. Colton is acting like such a girl right now I can’t. He looks like he might cry and it’s like, production already made you go to second base with Tia in Mexico, don’t pretend like jumping off a bridge is something you totally wouldn’t do for more Instagram followers. Tbh if I was Tayshia I’d let Colton go and then I’d be like “see ya never dude” and find some rich guy at the Four Seasons. You don’t need this sh*t, girlfriend.

AHAHAHHAHAHA. She did not just say that! Colton, that was not cute. He definitely just sharted in his pants. That’s why they immediately cut to them hanging out in the water, so we wouldn’t notice any stains on the seat of his trunks.

Ah, I was wondering when we’d get to the sob story portion of the evening. Tayshia says her life hasn’t been all roses because she recently went through a divorce, which definitely explains why someone who seems so down-to-earth and put together would be on this show. It’s all making sense now. I guess there’s nothing like sticking it to your ex by getting hot and heavy with a virgin on prime time television?

COLTON: Wow, I had such a blast tonight dissecting your emotional baggage.

God Colton, at least PRETEND like her heartbreak isn’t giving you a hard-on right now. Tayshia gets the rose and also another reason for her ex-husband to get the dog in their custody battle. I hope your sub-par makeout session with Colton was worth it!

The group date is up next and it starts with Colton lamenting over having to balance 13 relationships at once. Oh cry me a f*cking river, we know you blackmailed Mike Fleiss to get on this show, so smile and shut up.

Okay, Demi is bold. She’s jumping up on Colton’s back, getting sketches of the two of them made, and pretty much acting like the two of them are on their own date. The other girls in the house are pissed because she’s stealing all of the attention, but honestly she’s playing the game right. She’s trying to make the most of her limited time with Colton and I don’t think that’s wrong. #TeamDemi

For the group date Colton wants to show them the wonders of Singapore and takes them to a back alley harem. I wish I was joking. Okay, this is f*cking terrifying. Like, is this place even up to code? Do we know where these leeches have been? Because, yes, you heard me right. Colton is making them put LEECHES on themselves. As if draining their dignities week to week wasn’t enough, now they gotta give up their blood too.

For the next part of the date, Colton takes the girls to a street fair where he suggests they all try some of the local cuisine. Again, this is definitely something he saw and loved on Crazy Rich Asians. Also, I love that he’s forcing these girls to ingest fried frog legs. This is such a great crossover Fear Factor/The Bachelor episode!

At the cocktail party, Alabama Hannah is quick to be the first one to grab Colton. She’s trying to interrogate him about their relationship whilst wearing the most offensive jumpsuit I’ve ever seen. Hannah, why do you do things like this?

Okay, yes, I’m glad we’re addressing this. Back at the street fair an Asian fortune teller told Colton and Cassie that they were brother and sister in a past life and Colton is EATING it up. He’s like “I really believe in that stuff you know?”

Oh GOD. Demi opens up about her mother getting out of prison but I can’t take her seriously. She looks like a life-size Bratz doll right now.

Courtney is pissed that Demi keeps getting time with Colton, and it’s like, first of all, who even are you? Second of all, this is the f*cking Bachelor! You literally signed up for this sh*t. She confronts Demi and tries to tell her she’s being immature, but Demi isn’t the one pouting about not getting screen time…

^^My official motto from now until the end of time.

Demi gets the group date rose because no one else had more emotional baggage than her. Thanks, mom!!

Caelynn has the second one-on-one date and I don’t care what Colton said to get to second base with Alabama Hannah last night, this is a big f*ck you to her. I would not be surprised if in between montages of them making out the camera cuts to Alabama Hannah stress-eating her hair by the pool.

Colton tells Caelynn that today is all about treating her as if he will actually be using his own money on this date. Please.

Jesus. He really is living out his Crazy Rich Asians fantasy. He takes Caelynn on a shopping spree at what I can only assume is the Forever 21 of Singapore? I’m alarmed at the dresses they’re pulling. Like, I’ve never seen trash like that before and I’ve sat through three weeks of Demi’s rose ceremony outfits…

Cut to the cocktail party, and Caelynn tells us she has a story she needs to tell Colton. Grab your tissues now.

Okay, this… took a dark turn. Caelynn says she was sexually assaulted in college, which is absolutely horrifying.

Colton brings up how he used to date someone who was sexually abused and he has to be talking about Aly Raisman, right? I’m kind of not okay with that. That’s her story to tell.

Honestly, I don’t want to say anything else about this. I feel horrible that this happened to Caelynn and I’m glad she’s being open and honest about it. I’m glad her voice is being heard and she’s advocating for sexual assault victims. That said, I don’t know how I feel about ABC capitalizing off of it…

Caelynn gets the rose, and I get another box of tissues.

Demi, still riding off the high of her group date rose, gives an impassioned speech about how every girl should get some time with Colton. She’s like “I’m gonna talk to him and so should you and I don’t want to hear boo about it.” Lol. I’m sure this won’t at all result in her getting flung into the pool by an angry mob of hair extensions.

Colton slinks off with the girl who got the First Impression Rose night one. I legit forgot this girl even existed and I guess so did  Colton because he’s like “so what’s up?” Lol this girl is a DUD. No wonder she hasn’t gotten any screen time since.

Hannah G is like “tonight he acknowledged me in the biggest way ever” YEAH, HIS HAND ON YOUR ASS. Dream big.

Uh oh. Caelynn pulls Alabama Hannah aside to “talk” because she wants to bury the drama between them.

CAELYNN: I just want this experience to be enjoyable for both of us.

Lol they think being on The Bachelor should be enjoyable?? Oh, sweetie, no.

Okay, this feud between Demi and Courtney is out of control. Demi tells Colton that Courtney is the “cancer of the house”, which feels like a GROSS exaggeration, but okay. Courtney then turns around and starts sh*t talking Demi to Colton. Girls, girls, girls. When will you get it through your bleached heads that talking sh*t about other contestants to the lead never works out in your favor??

Courtney tells Colton that Demi used the word “game” when talking about their relationship, and it’s like, why is it a bad thing? This is kind of a numbers game until the end. You’re competing for attention. THAT’S THE WHOLE POINT.

Final rose count: Old Tracy and Courtney both get sent home, and honestly that feels like the right outcome. Though I’ll take any outcome where my eyeballs won’t be subjected to another week of Tracy’s “daring” fashion choices.

Well, y’all, I’m emotionally spent (and so is the wine) soooo I’m outtie! See you betches next week. Xo.

If you or someone you know has been sexually assaulted, call the National Sexual Assault Telephone Hotline at 800-656-HOPE (4673) or visit online.rainn.org.