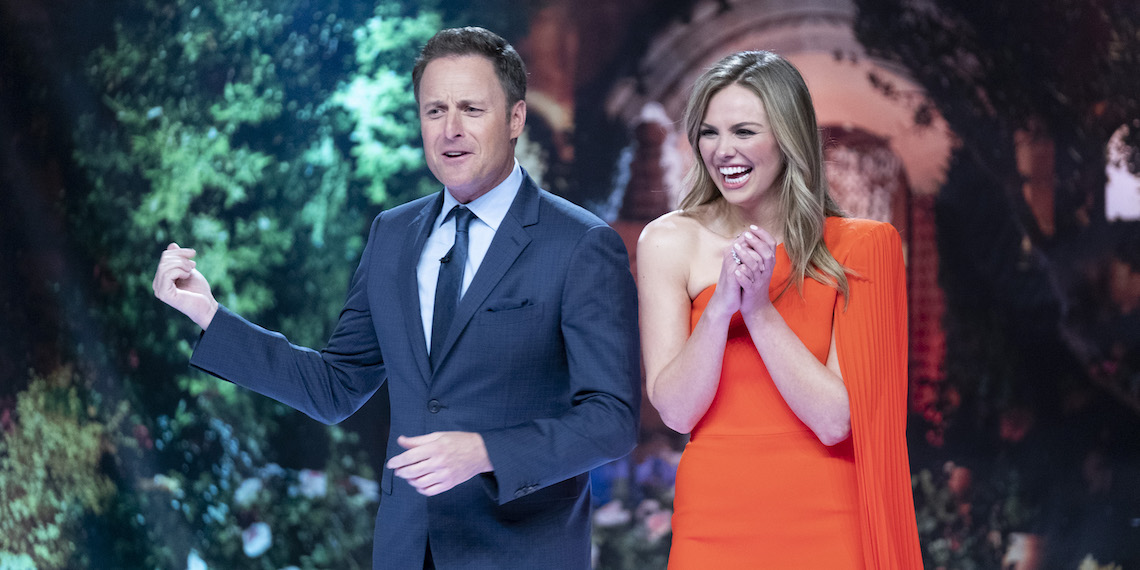 Welcome back to night two of The Bachelor season finale because, yes, Colton’s season is STILL somehow going on. I should know, I’ve only been praying all day that God would drop an anvil on my head or something and finally put me out of my misery. But alas, I’m still here. Last night we watched Colton  take to the wild streets of Portugal until Chris Harrison, who earned his paycheck and then some, coddled his ego enough that he could be lured back to the hotel. Snaps for you, Chris! The rest of the episode flipped back and forth between Colton dumping any woman who would actually sleep with him and live content from After The Final Rose. The episode ended with Colton deciding to risk the last remnants of his dignity by getting on his hands and knees and begging to Cassie to take him back. Jesus.

Moving on to this week. Chris Harrison starts things off by posing this question to the audience: can Cassie find love with Colton or will he remain a virgin forever? Because I guess that’s what’s really important here, not finding unconditional love and everlasting happiness, but that Colton really needs to get laid!!

Cassie opens the door and she doesn’t look at all surprised to see Colton there. Is it normal for her to have grown-ass men sobbing at her door?

COLTON: I broke up with Tayshia and Hannah for you.
CASSIE:

Did she just straight-up laugh in his face when he said that? CASSIE! At least keep it together until he’s not in the room! Also, Colton, it’s not looking good for you, buddy. Cassie’s like “I don’t understand because other girls told me they were farther along with and I literally said I’m not interested??” Yeah, it’s a mystery to us too, Cassie.

She is so turned off by him right now, it’s crazy. She’s, like, still trying to convince him to dump her, but Colton is clinging on to her for dear life. I also just don’t understand why Cassie is freaking out like this? He says they don’t have to get engaged at the end, so the only reason she should be freaking out is if she actually doesn’t like him, which is definitely the case!!

Wait. Why are they kissing now?? I don’t understand. Are they together? Are they breaking up? Is it a pity kiss? WHAT IS HAPPENING.

COLTON: I know you don’t want to be seen with me in public anymore, but I can offer you a free trip to Spain?
CASSIE: Fine.

FINE?! I can’t believe I’m wasting FOUR HOURS of my life that I will never be able to get back on a girl that has the same feelings about her relationship as I do about saltine crackers.

Yes, you read that right. A girl who might describe her feelings for Colton as lukewarm at best is going to meet his parents. Colton explains what went down during the fantasy suites, and his parents look appropriately horrified, and not just about the amount of times their adult son has mentioned his virginity during family breakfast.

Colton says he’s going to be optimistic about this relationship, but there’s literally no one else, so really what are his options?

Right away Uncle John is like “So are you dating? Just friends? Letting Colton at least get a BJ at the end of all this?” UNCLE JOHN. He’s worse then my friend Ashley who’s always asking me to define the relationship when she knows damn well that I prefer to keep any of my romantic entanglements an emotional arms-length away. God!

Colton’s mom pulls him aside, and I hope she slaps some sense into him. Is it just me or is Colton acting like they’re actually dating? But Cassie has not at all said that those words. He’s acting like once they leave this show, Cassie will be his. Um, after she leaves ABC’s clutches she’s not contractually obligated to be anywhere near you anymore, bro.

CASSIE: Where should I start when it comes to our relationship?
COLTON’S MOM: Well, you can start with your decision to bail.
ME TO MY DOG, ALONE IN OUR LIVING ROOM:

Y’all, I’m truly living for the disgust Colton’s family is openly displaying for Cassie rn. They’re not even trying to hide it at this point. His mother is practically sneering into her margarita, and his dad is crying because he hates her so much. Their resentment is putting an extra spring in my step.

Colton gets one last chance to bribe Cassie not to leave him while the cameras aren’t rolling, and he is pulling out all the stops. Romantic scenery, a once-in-a-lifetime activity which he can twist into a metaphor about their relationship and taking a “leap of faith.” God, I hope it all blows up in his face.

For the date, they’re having a picnic seaside, but first they have to shimmy down a cliff. Cassie, you better be careful what you say to him…one wrong word and Colton might throw himself off that cliff. Honestly, I’m hoping they both fall to their deaths.

Cassie finally admits that she has commitment issues, and not only is she not ready to get married, but she can’t even see herself dating someone, which is why she signed up for a show where the end goal is to be in a committed relationship. Makes sense.

Cut to the cocktail portion of this evening, and Cassie is pretending to be mildly attracted to Colton again. Which producer had to whisper “thousands more Instagram followers” into her ear before this to get her hyped enough for this date?

CASSIE: You’ve taught me a lot. Like I can’t get away no matter how far I run.

Colton asks Cassie if she feels like  going into the fantasy suite and she says yes!! Against all odds (and so many tears), Colton is actually going to lose his virginity. He kicks production out and all but throws his mic and his underwear out into the hallway. This is so uncomfortable. Like, I’m watching a docuseries on a brothel. I feel dirty.

Cut to the next morning and Colton is all but waving her bra in the air for the cameras, he’s that f*cking smug.

COLTON: We did what was right for our relationship.
ALSO COLTON:

Good for you, Colton! you’re a big boy now. I hope those five seconds were everything you dreamed they would be.

After The Final Rose

Chris brings out Colton and Cassie and, because he is a messy bitch, immediately asks them if they banged. He doesn’t even pretend to beat around the bush. Though, now that I think about it, that’s probably about as much foreplay as Colton gave Cassie in Portugal, so by all means Chris Harrison, carry on.

God. F*ck off, Colton. He’s like “I know I profited off my virginity for the past 10 weeks, but now that you want an answer I’m not going to tell you.” Yeah the only reason he’s not “kissing and telling” is because Cassie’s dad probably threatened to castrate him or something.

COLTON: We’ve come really far since our time on the show. Cassie is actually letting me breathe the same air as her now!

I’m sorry, but did Colton just say that “spending a lot of time together” is a big step in their relationship? Was he not mentally and emotionally prepared to MARRY someone at the beginning of this, and now he’s just settling for being allowed to be within 100 feet of his girlfriend? Oh, Colton.

ABC rolls out some footage of their time together post-production and it’s really sweet to watch Cassie finally get on board with this and read what production wrote about Colton word-for-word. Thanks for finally getting with the program, sweetie!

Okay, who tf is Air Supply and why are they on my screen rn? Is ABC punking me? Is this just another one-on-one and the season is still happening?? I’m so confused.

I love that they’re forcing Colton and Cassie to dance in front of this entire viewing audience like the performing circus animals they are. Dance, monkeys, dance!

Also, the band is belting out the lyrics “making love out of nothing at all” as these two pretend to be into each other is the ultimate burn. Bravo, ABC.

Next up, ABC announces the next Bachelorette and it’s… Alabama Hannah!! Wow. This might be the first time Hannah B has beat Caelynn out for anything in her entire damn life, and I am here for it. Honestly, Caelynn will probably have better luck on Ship than with the psychos ABC chooses her, so who really won here?

Unpopular opinion: I love Alabama Hannah, and I’m so happy they chose her to be the next Bachelorette. I know I gave her a lot of sh*t at the beginning of Colton’s season, but she’s really grown on me. And I love, love, LOVE that she’s not in the least bit poised or put-together. She’s going to be a hot mess and I think her bumbling ass is going to make for great TV.

Hannah B as The Bachelorette telling the guys in the house to pack they’re bags because they’re going overseas pic.twitter.com/LFfXpIn7GE

CHRIS HARRISON: What’s your ideal man?
HANNAH: I just hope they can string words together.

Funny, that’s where my bar is set too.

Speaking of her men, ABC decides to bring out five men from Hannah’s season RIGHT NOW to woo her. My first impression of Hannah’s guys goes as such:

Hannah says all the men were great and she wishes she could give out a rose and Chris is like “Well how convenient because we have one right here!” Chris, I know you just shamelessly promoted your acting stint on Single Parents, but my god, you need to work on your surprise coincidence face.

HANNAH: You were all so great!
ALSO HANNAH:

She gives the rose to Mr. Malibu Most Wanted and it’s going to make for a fun season if she’s out here picking the guys that actually show a personality instead of the ones showing off their new jaws they just got perfectly contoured at the filler clinic.

And that’s a wrap for the season, betches! If you need me, I’ll just be here trying to bleach my brain from ever having seen Colton’s shiny, sobbing face. See you hoes in May for The Bachelorette!