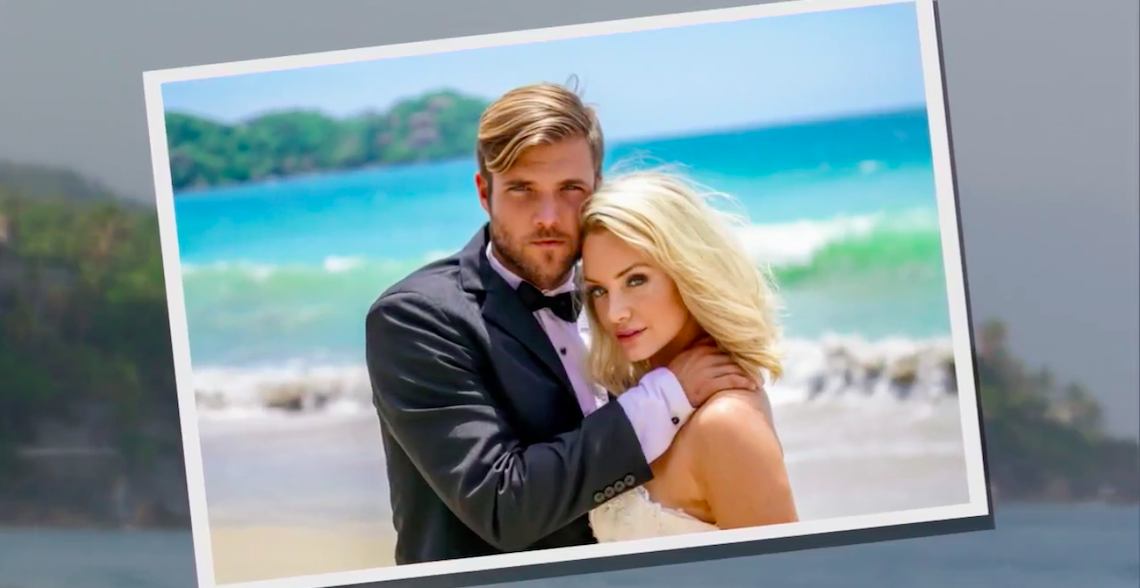 The Best ‘Bachelor In Paradise’ Recap You’ll Ever Read: The Finale, Night 1

This week we’ll find out which couples will ruin their lives by getting engaged to a person they’ve known for about as long as my leftover Chinese food has been sitting in the fridge, and which couples will break up, having just brought shame upon their households by dry humping anything with a pulse all summer. *cough* Venmo John *cough, cough*.  Shall we get started?

The episode opens with Kamil still talking about the Russian witch hunt. He’s like “she burned my picture in a fire, she’s definitely a witch,” which is literally something my ex has said about me so, what’s your point, Kamil? Hmm?

The next natural transition here is to introduce a date card into the mix. Joe mentions he’d like a date card because he’s never gotten one before and would like to solidify things with Kendall so production gives it to Jordan. ABC, why do you want me to burn your studios to the ground so bad?

“I’ve been praying for someone like you. I feel like God sent you to me.” #BachelorInParadise #BachelorNation

Okay, why is Jenna acting like such an anxious freak rn? Could it be the drugs, or is it because they’re making her put on a wedding dress in front of a man she’s been dating for 9 days? I didn’t know she was capable of such rational thought, but okay.

Robby Hayes walks into Paradise and I’m confused as to why new men are still showing up. Is this not the finale? ABC DO NOT PLAY WITH ME LIKE THIS.

CASSIE: Robby is going to have a hard time here because everyone knows what a piece of sh*t he was to Amanda.

So naturally Shushanna, who has turned down literally every semi-nice guy to walk into Paradise, starts foaming at the mouth at the sight of Robby and his drawn on eyebrows. Damn, this girl is a psycho and I love it.

Robby asks Shu on the date and she accepts because she thinks he felt a connection with her. Godddd this date is so boring. They go on some sort of dinner/date combo that can be summed up in this entire exchange:

SHU: Apparently I’m a witch so be careful.

While the Russian and Robby are on their date, Jordan gathers the girls around to tell them the bedtime story of how Robby screwed over Amanda Stanton and there were receipts to prove it. Ah, yes, I believe I’ve heard of that one before. Scarier than the boogeyman. Meanwhile, Jenna hears the words “douchebag” and “cheater” and looks longingly into the distance.

Cut to Shu and Robby’s date and it actually seems to be going pretty well? Idk how this girl is doing it because I could not take a date with Robby and his blinding veneers seriously.

Back at the beach, the rest of the couples are trying to figure out if their relationships will make it past the tequila shots they took this summer. Doubtful.

Joe tells Kendall that he sees a future with her outside of Paradise and she looks like he just told her she should go lick their communal bathroom floor. MY GOD KENDALL. If you were so petrified of commitment why did you go on a show TWICE where the end goal is engagement? I swear to f*cking god, Kendall, I will skin your ungrateful body and hang it on my wall if you don’t start returning Joe’s love.

YOU DON’T KNOW HOW HE FEELS, KENDALL??

Wait. Tonight’s a rose ceremony? Lol they’re still doing that? I figured production had abandoned them to tequila and their own devices at this point, but okay.

There’s only one rose that’s up for grabs and it’s Olivia’s. She gets to choose between Diggy, who is goddamn snack, or Venmo John, who can offer her a rose next week but only if another girl doesn’t walk in first. This choice is so hard!!

Elsewhere, Kendall tells Joe that she loves him but she’s not in love with him and I’ve never wanted to cut someone so much in my entire life. She’s like “we just have doubts about this whole thing” and Joe goes “please stop saying ‘we’ because you know that’s not how I feel.” PLEASE STOP SAYING WE. I AM DEAD.

KENDALL: I don’t know if I’m in love with Joe.

ME AND ALL OF AMERICA:

OMG Joe is leaving?? Just like that? Tbh I didn’t think it was possible, but Joe comes out of this looking even better than before. Joe, call me.

Side note: I’m just imagining these two being stuck at the airport together actively not looking at each other and having their producers speak for them. You know Chris Harrison is somewhere saying “Oh, sorry! We booked you on the same flight. Budget cuts, you understand!”

Cut to the next morning and Chris Harrison drags everyone away from the bar long enough to let them know that no new people will be coming to Paradise. He’s like “if you do not leave this beach rn you will be contractually obligated to get engaged by the end of this, k?”

He leaves and couples start abandoning ship left and right. Venmo John after promising to always choose Olivia at the rose ceremony, immediately stutters out that he’s not ready for anything serious but, like, maybe they can hang out when they both get back to LA? So sweet. Cassie and Kiwi Jordan also call it quits.

Lol did Robby just tell Shu “have a nice summer, we’ll hang out soon”?? He might as well have said “don’t expect me to speak to you at Bachelor reunions but do expect me to DM you naked mirror selfies.” Ah, Robby Hayes, please  die in a fiery car crash already.

Wait. Do they not even get to say goodbye to their friends first? Or finish their breakfast? What about Kevin’s eight-egg omelette, Chris?! You savage.

Kevin and Astrid are up next and I have a feeling Kevin is about to say some dumb shit for no reason.

ME: You should be wearing a helmet.

Kevin keeps saying how into Astrid he is, but how he has doubts about progressing their relationship to the next step in the fantasy suite. What? Does he think she’ll be bad in bed or something?

ASTRID: What do you have doubts about?

KEVIN: Well for starters, if I say no to the fantasy suite do I still get my grand slam breakfast?

Kevin says he has doubts about going into a fantasy suite again because he shouldn’t have gone into one with “someone else” and omg he’s totally talking about Ashley I. and her V-card.

WAIT. And now he’s dumping her? This sh*t is literally bananas. Like, Kevin displays more passion over his homemade salad dressings and eight-egg omelette than he is over Astrid rn. Hope that balsamic vinaigrette will suck your d*ck at night, Kevin!

Chris and Krystal, Annaliese and Kamil, and Jordan and Jenna are all going to the fantasy suites. Literally none of these couples should be getting engaged. Like, I can’t even believe they are making us entertain the possibility that any of these couples made it past Labor Day.

Moving on to the fantasy suites. Annaliese just asked Kamil if he could imagine himself with a girl like her and he came up with a very long convoluted answer that meant nothing but definitely got him laid. I’m sure when we find out at the reunion that he’s been sliding into other girls’ DMs, he’ll blame that little slip up on the language barrier. I see right through you, Kamil!

Meanwhile, Jordan is wearing a monochromatic outfit and telling Jenna he’s in love with her. Jenna says that she thinks God brought Jordan to her and it’s like please don’t bring God into this. God officially would like to be excluded from this narrative.

Jordan just stopped their make out session to fix his hair and my body shriveled up a little. And on that note, I’m out! We’ll have to wait until tomorrow to see which of these couples will actually  spit on the sanctity of marriage. See you betches then!