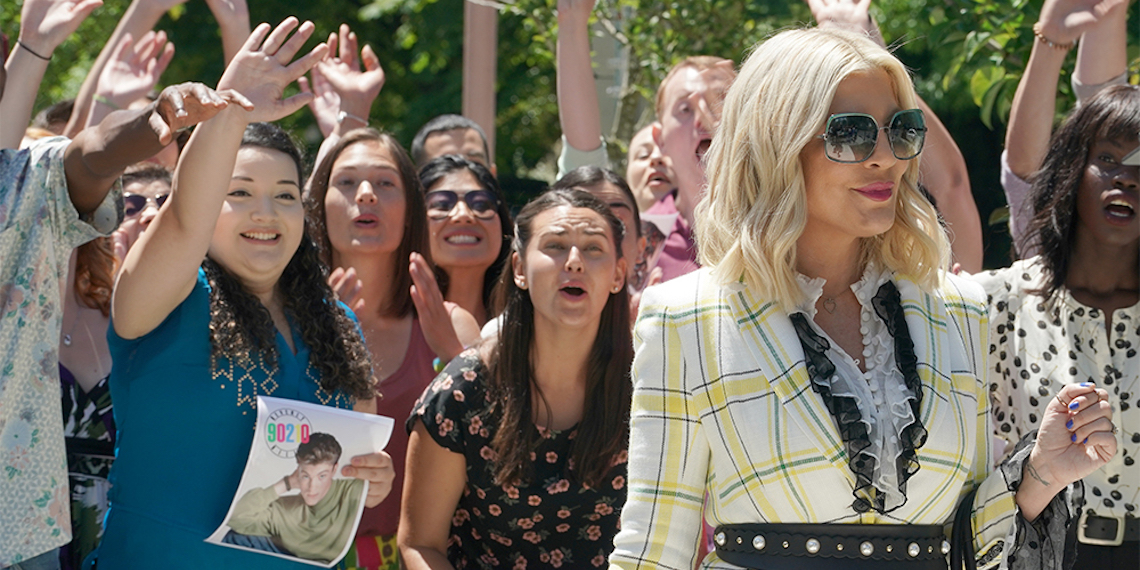 Okay kids, last night Beverly Hills, 90210 got the reboot its fans have been hoping for, and it turns out it’s true what they say: be careful what you wish for. Opening with a bizarre Tori Spelling dream sequence about Kelly and Brandon owning The Peach Pit and quickly turning into a depressing mockumentary about what happens if you don’t save your money when you’re a teenage actor, the entire show felt like a psychedelic mushroom trip that made me want to swear off shrooms for the rest of my life.

In no way is this reboot reminiscent of the 90210 that we remember from the 90s, but instead it’s a show about the cast and where they are now, only scripted. Confused yet? Same. With a bumpy intro they reveal each cast member’s current lot in life, and the audience (me) is left feeling kind of depressed at the peak behind the curtain and hopeful that it’s all exaggerated.

While it’s no secret that Tori Spelling’s had more financial trouble than anyone whose father was worth literally $600 million ever should, the episode seemed like a long PSA to Venmo her whatever I could spare. From multiple “jokes” about her reality shows being canceled to her on-screen husband not having a job, the entire thing just made me feel uncomfortable. Also, I’m no financial advisor, but it seems like she has plenty of money to blow on collagen injections and botox, so maybe she could save some green by not getting work done on her face seemingly every single day?

With so many similarities to the cast’s real lives, I kept finding myself Googling whether things were true or not, for example:

“Did Ian Ziering’s wife really audition for The Real Housewives of Orange County?”

“Has Jennie Garth been divorced 3 times?”

“Is Gabrielle Carteris actually the president of SAG?”

And my personal favorite, “Does Shannen Doherty own a tiger sanctuary?”

The answers, by the way, are no, yes, yes, and very unfortunately not. Those questions don’t even put a dent in how many things came up that left me scratching my head wondering if Brian Austin Green actually owns a private plane and if Tori Spelling actually made her father cast Jason Priestley all those years ago.

I’m sure a lot of things they’re supposed to be experiencing in the show are simply exaggerations of what the actors have experienced in real life, and in a way it’s admirable of Spelling to be so open about her financial issues, Garth to make light of her failed marriages, and Priestley to be so vocal about feeling like his best years have gone by, but the packaging of the pilot was simply too much. I found myself thinking, “is it too late at night to take Adderall” multiple times while using a red marker and a white board to try and connect all the floating nuggets of information being thrown at me like free T-shirts at an indoor football game. (I think…never been.)

To put it as simply as possible, the new 90210 is a reboot about a reboot. It was created by Jennie Garth and Tori Spelling, who have clearly maintained their friendship over the past 30 years.Spelling’s on-screen children call Garth “Aunt Jennie” to further the audience’s knowledge of their close relationship. (I also know they’re still friends because they guest-judged a recent episode of Rupaul’s Drag Race. Apparently sometimes being gay can come in handy while watching Fox.)

There were brief moments of humor, like the entire cast smashing the enclosed glass around Spelling’s iconic red dress from the Spring dance and forcing a stranger to Instagram live it, and Priestley knocking out a young actor for calling him a has-been. Overall, though, it was very clunky and rushed and needed to contain about half of the scenes that it did. Garth and Spelling maybe should’ve chosen whether Gabrielle needed both a heartwarming scene of her and her husband becoming grandparents and a scene of her making out with a female bartender. Or whether the show needed not one, but two former MTV veejays to play the wives of Priestley and Green. Or whether Garth really needed a scene in a velvet dress sitting by the pool flirting with a self-identified pig farmer who she ultimately ends up rejecting for calling her Kelly.

I don’t know if it’s because the show ended with a heartwarming scene of Garth and Spelling cuddled on the couch together talking about how doing this reboot is the answer to all their problems, watching a clip from the original 90210 where their fallen cast mate Luke Perry—who died suddenly earlier this year—says “welcome to paradise, man, welcome to your dream come true,” but I’m really rooting for them.

Was it completely insane? Yes. Will I tune in again next week, yes.