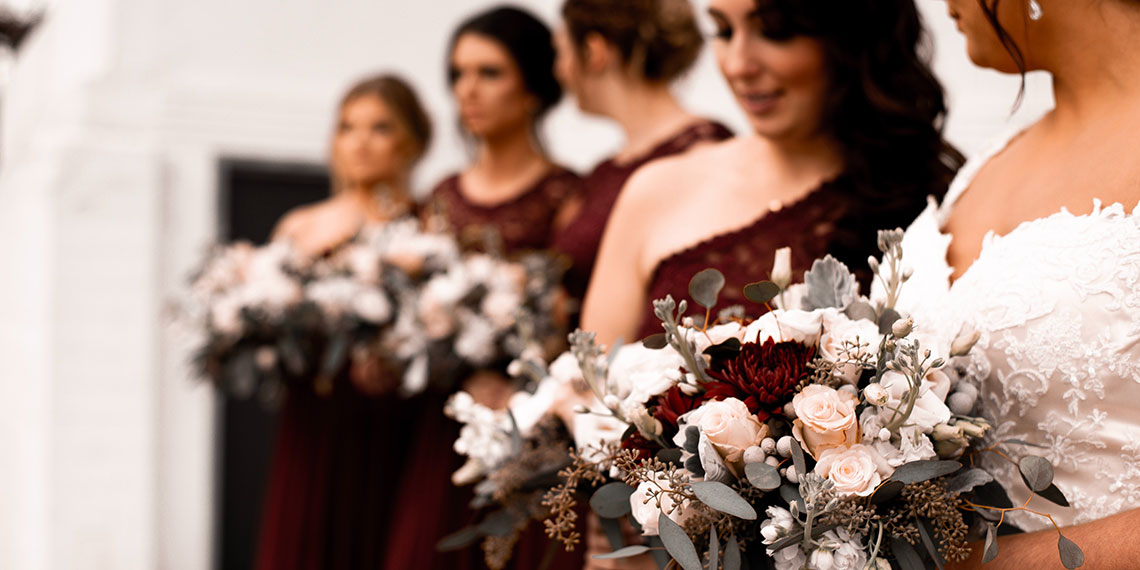 It’s almost always the same. You’re just walking around, minding your own business, wearing leggings like they’re pants, when suddenly you get the text. The selfie of a distant friend holding up her hand with the dreaded words underneath: “I’m engaged!”

Naturally, two things immediately pop in your head as you zoom in on the rock to try to gauge the size:

Whether you’re a seasoned bridesmaid or you’re new to the idea of missing cocktail hour for maybe ONE photo of you and the bride that’s good enough to post on Instagram, you’ll quickly realize that being in a wedding isn’t all sunshine and Spanx. Odds are, if you’ve been asked to stand by the bride’s side, you’ll end up doing one of these classic bridesmaid tasks that will quickly make you realize why so many of your friends fear wedding season like it’s the next White Claw shortage.

First come the bridesmaid proposal boxes filled with cheap-ass earrings and candles from the Dollar Spot at Target, then comes the group chat. As soon as all of the bride’s besties and politically chosen bridesmaids have been informed of their dutiful roles, the hell-inducing group chat begins. Whether it’s the bride, the MOH, or the bridesmaid who *thinks* she’s the MOH, there comes the day when you look down and see a “Heyyyy ladies,” text with 7-12 unrecognizable numbers blowing up your phone.

Being the person to head this painful exchange of half-hearted pleasantries and snarky opinions is one of the lesser evils, but an evil all the same. Whether you chose to ask for the group’s opinions on things (which is, obviously, a rookie mistake), or you announce decisions to deafening silence where you know a million side texts are being sent out bashing the bride/you about whatever it was you told them to do (“Really? She wants us to wear f*cking flower crowns? In NASHVILLE?”), there’s no telling just how deep the psychological trauma and warfare can go. Pop a Xanny, turn off notifications, and count down the days until you can delete the thread for good.

After the group text is established (and by that, I mean ruining your GD life), the bride will inevitably ask someone to put together and be in charge of the over-the-top emergency day-of kit. You’ll shell out a good $200 on sh*t like boob tape, teeth whiteners, and a phone charger that someone will immediately “borrow” and never return, just to potentially forget it all in your hotel room before heading to the venue.

While being the girl who has to lug around a tote full of hair spray and Band-Aids like an overzealous chaperone isn’t exactly torture, having bridesmaids running up to you all night asking for gum/bobby pins/lipstick/oil blotting sheets/setting spray isn’t really what you had in mind when you booked your $480 round trip flight.

While this prestigious role could go to a bridesmaid, it could also go to a girl who almost made the cut but didn’t quite get on the A-team. Whether it goes to a bitch in a matching dusty blue dress or not, the bride always seems to think this honor will make up for the fact that this bridesmaid is either in the worst spot, the ugliest dress, or didn’t get to be a bridesmaid at all. While she’ll get a few moments of attention with some ever-cliche Corinthians reading, it’s not worth staying semi-sober until 6pm just for a few minutes of anxiety-riddled glory.

Wedding planning isn’t all rainbows and sunshine—which, if you’re engaged, you’ve definitely figured out by now. (BTW, if it is all that stuff for you, we hate you.) While you may feel like you’re ready to jump off the proverbial cliff you’re standing on, back away. We’re here to let you it’s OKAY if your wedding doesn’t turn out just like your Pinterest board. Link in bio: 15 Ways Your Wedding Expectations Won’t Match Up With Reality. https://betches.co/2ZokM3T

What’s better than begging people whose names you should probably know but can’t remember to sign a picture of the couple wearing matching fall sweaters and hugging (despite the fact that they took the photo in July for their fall Save the Dates and are obviously sweating their asses off) while you’re wearing an ill-fitting dress that was absolutely chosen out of the bride’s own insecurities? Doing this while standing *just* outside a party of all of your friends. Enjoy asking people to scribble their initials on their way to the bathroom like a jackass while your college besties make out with their dates on the dance floor!

The bride said nude heels? Updos? Pale pink nails? Natural eye shadow? No hair ties on the wrists for photos? Being the one who has to tell the girls the beauty rules and make sure they stick to them is not for the faint of heart. Only a true villain can come by with nude polish and sloppily paint over the $60 powder dip burgundy mani the one bridesmaid who didn’t read the extensive beauty rules email got the day before, but someone has to do it*. Be prepared for friendships to end before you even get down the aisle.

The only problem? Smooches has to be taken care of for the other 23 hours and 45 minutes of the day that a photographer isn’t squeaking a toy in her face in the attempt to get ONE good shot of her with the bride. Luckily, the bride has you! YOU get to be the one to walk Smooches in the damp grass while wearing 4-inch heels. And pick up Smooches’ sh*t while wearing a formal gown. YOU get to check in on Smooches while she’s shoved in a kennel in the hotel room because the manager said she can’t be left unattended.

Being single at a wedding is the best. You don’t have to worry about your date who will most likely resent you for having to sit at a table alone while you ball out at the head table or deal with the jealousy that comes from you and your friends recounting all of your drunken college shenanigans, most of which involved guys named either Brad, Chad, or Dan.

The worst part? There’s a decent chance (especially if most of the party is already coupled up) that you’ll be paired with the perpetually single groomsman. You know, the guy the bride absolutely hates but the groom insists is actually a sweetheart deep down, despite his raging alcoholism, sexism, and body hair. You’ll spend the whole night dodging him and his sexual advances while he manages to find any way to put his hand on your ass and not-so-subtly hint that, in his eyes, you’re pretty much required to hook up with him. The upside? He’ll like your Instagrams until the day he dies, and he’ll most likely blackout and be asked to leave before the cake cutting, so at least there’s that?

3. The Person Who Has To Make Literally Any Big Decision

I have 9 weddings this Fall. please someone SPARE ME. // link in bio for our podcast episode on tips for cutting down your guest list ✂️

At some point in the wedding planning process, things go from fun to f*cked-up reallllllll fast. Most of the time, this happens about .001 seconds after your friend gets the ring. Before that, it’s all over-the-top Pinterest boards and casual wedding venue searching. After *actually* getting engaged, sh*t hits the fan when real vendors have to be hired and real dates/destinations have to be decided on.

The wedding aside, finding a date and location for 17 of your closest friends to drunkenly cry together all weekend is easily one of the biggest stress tests of your life. So, naturally, the bride passes the task off to one of her bridesmaids and lets her handle the fallout. That poor friend has to deal with telling the girls that you’re going to go to Cancún in September even though half of the group wanted Vegas and the teacher friends EXPLICITLY SAID they can only go in the summer. It’s basically a murder-suicide for whoever sends out the Google Poll asking for RSVPs. At least you’re not collecting the money though, right?

Once the bachelorette location is decided on and hated by one-third of the group, the shower venue is chosen, and the beauty salon is selected, the next step is for someone to plop down a credit card. And if daddy’s not paying? That’s going to land on one of the bridesmaids. Whoever is the most type-A and/or has the most to prove to the bride will have to max out all of her cards and send out the Venmo requests. That means a whole bunch of broke twentysomethings are about to get a $500+ charge for a weekend that has nothing to do with them.

Between ignoring the charge, claiming they “dOn’T hAvE tHe aPp,” or continuously “forgetting” to pay then “mysteriously” having a family emergency the week of the bachelorette and flaking, leaving you to pay their share, there’s a 0% chance you’ll make it out debt-free. If you don’t end up resenting at least one girl and getting a call from your bank about exceeding your spending limit within a 36-hour period, you probably did things wrong—just sayin’.

There’s one reason and one reason only that ANYONE wants to be the Maid of Honor: so everyone else knows that their friendship pales in comparison to yours. Other than the *hopefully* marginally better dress and photo ops, the MOH is the bride’s bitch through and through, and odds are you’ll have to complete every one of the sh*tty tasks above, and then some, alone. Still, you’re the one who gets to stand right by the bride’s side, hunching over to adjust her train 43 times turning the ceremony to let everyone know that you’re the best, and at the end of the day, isn’t that what being in a wedding is all about?