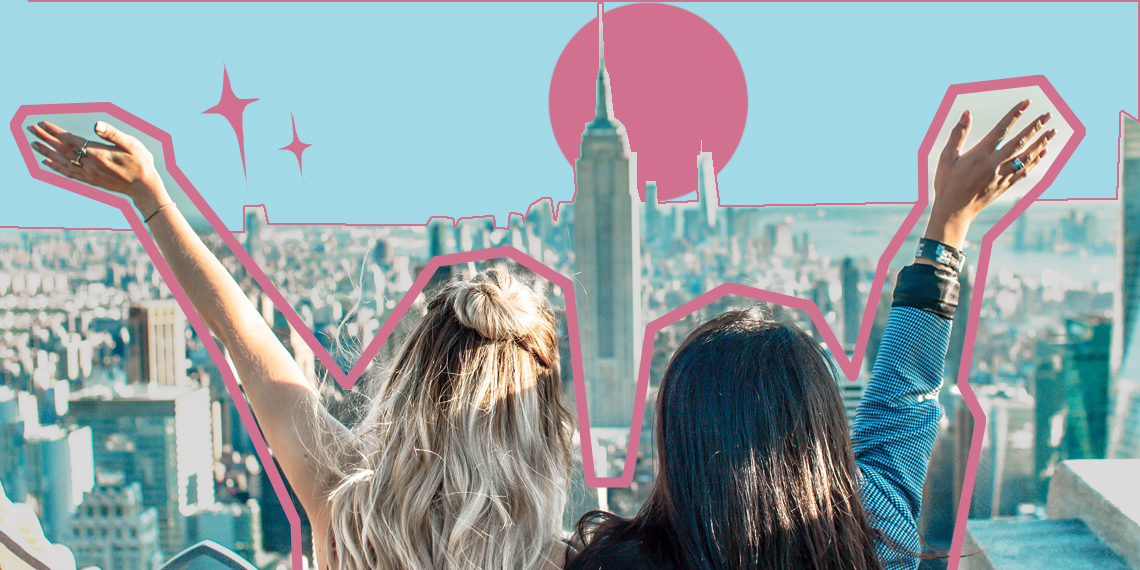 Spring is finally here, which means New Yorkers will actually start to enjoy living in this city. Unlike most places, spring in New York occurs for approximately two weeks between a disgustingly freezing winter à la March of the Penguins and a summer that is essentially just one giant heatwave. Fun times! New Yorkers generally don’t enjoy nature (at least I don’t), but that doesn’t mean we don’t like being outside when the arctic conditions have finally peaced the f*ck out. And because I refuse to pretend that I want to take advantage of the nice weather in Central Park, I will always be the first to propose the plan in the group chat before anyone else has the chance: rooftop bars.

Seriously, name one thing better than drinking against the backdrop of a beautiful skyline in pristine weather conditions. I’ll wait. Here’s the thing, as much as this city makes me question my will to live, there are times when I am happy to exist in a place where I can have a sit-down dinner at 11pm or run into Karlie Kloss every now and then. One of the most amazing qualities of this city is its ungodly amount of bars serving generous pours. So, while I couldn’t tell you where the f*ck to eat in the Theater District for a 6:30 show (which is what most people want to know), I can tell you where to knock a few back as the weather warms up. You’re welcome, darlings.

If you can’t picture where Gallow Green is on a map, would West 27th Street between 10th and 11th Avenues help? I know what you’re thinking, “Wait. Isn’t that where Marquee is?” Why, yes it is, but if you’re not in college anymore, you have absolutely no reason to be at Marquee, so just keep walking west and you’ll find yourself at the door of the McKittrick Hotel. Now, if you’re a cultured New Yorker, you’ll know that the McKittrick Hotel is home to the only reason any of us know what Shakespeare’s Macbeth is about aka Sleep No More. So far, so good! Just above the steamiest play of all time is a seriously chic cocktail-slinging garden-vibes rooftop bar called Gallow Green. To paint a picture for you, it’s the Garden of Eden with a bar in the back. It’s named after a Scottish field where accused witches were hanged (neat!), so the bar has kind of an old-timey feel complete with string lights, greenery and tattered white flags hanging from the ceiling. Most importantly, the cocktails are to-die-for and the food is actually pretty amazing, too. I’ll take a Sleep No More cocktail with a side of assorted pizzas, please.

This place has a spring break in Cancun vibe, but for adults, and I am not mad about it. It’s right in Midtown, so you can head straight here after you’re done pretending to make the world a better place at your finance job. Vida Verde isn’t like, revolutionary, but there are two things about it that make me want to go here over every other Midtown rooftop. First, there are more tables than I’ve ever seen in one place, which is ideal because I have a standing desk at work and now associate standing up with Excel and calendar invites. If there is a drink in my hand and nachos in the vicinity, I need to be sitting, mmkay? Second, there are 10 flavors of margarita. Lastly, a drinking establishment is only as good as its vibe, and Vida Verde clearly knows that, which is why the roof is literally covered in murals and every chair is a different color. I know the menu is prob the most important, but you’re playing yourself if you think you’re not going to take any Instagrams up here, honey. Take a seat, sip one of your 10 margs and enjoy the beautiful weather up here.

Ophelia is set in midtown East, but like, all the way east to the point that you are almost walking into the East River. But once you get inside, you’ll realize it’s well worth the trek. Perched 26 stories above the city, the Gatsby-reminiscent bar offers 360-degree views of the East River and Manhattan skyline in both its indoor and outdoor sections, so checking out this rooftop is not weather-dependent. The cocktails are delicious (and will sneak up on you—buyer beware). I had the appropriately named Flapper drink, which came in a glass dusted in sugar, and was prettier than I can ever hope to be (and tasted as good as it looked).

I avoid the Garment District harder than I do making eye contact with my ex in the Trader Joe’s line on a Sunday morning. But I’ll gladly step foot in New York’s equivalent of District 12 for Refinery Rooftop. If you’ve ever experienced the nightmare that is a fashion internship, you’ll know that those four miserable blocks between 6th and 9th Avenues are the bane of human existence during the summer months, but Refinery Rooftop is a game changer, I promise. I don’t even get PTSD-induced flashbacks from my trips to Mood anymore! Anyway, Refinery is not a massive frat house like so many rooftop bars. It actually kind of feels like you got lost in someone’s enormous house and just stumbled around until you ended up on her outdoor deck. I mean that in the best way possible: it’s quaint, it’s chic and it’s surprisingly homey! The roof has a giant skylight and the walls are exposed brick, which is chic af. The cocktails are pretty decent, but be sure to order the bar’s signature sips because for each one sold, one dollar will be donated to GrowNYC! According to Refinery Rooftop, GrowNYC “improve New York City’s quality of life through environmental programs that transform communities and empower all New Yorkers.” It’d be cool if they could improve New York City’s quality of life by fixing the f*cked up subway system, but I guess environmental programs are cool, too.

The Crown Rooftop at 50 Bowery Hotel

When it comes to sweeping views, this Chinatown gem truly has them all: Brooklyn, Manhattan, maybe even Queens! Don’t get me wrong, Chinatown can def be disgusting what with the constant stench of freshly dead fish and enormous crowds that insist on taking up 110% of the sidewalks, but honestly, this is one of my favorite neighborhoods in Manhattan thanks to the mom in Broad City. Ok, back to The Crown. This summer, The Crown is rolling out all the stops with its new theme, Royal Summer. I’m into it. TBH, one of the things I love most about this place, aside from its bougie theme, is the fact that there are indoor and outdoor sections. As much as I love breathing in the polluted-beyond-reason New York air, sometimes I just want to sit on a plush sofa in an air-conditioned space with a drink in my hand. Is that too much to ask? The Crown doesn’t think so! This season’s new menu items include a lobster roll with North Fork chips and a “backyard” burger (among other items) and, for the drinks, Rose-Colored Glasses. My friends tell me I wear these on dates with attractive guys, fully knowing they will ruin my life for a few months, but whatever. To each her own, right?

Truth be told, I went on a horrendous date here when I first moved to New York, but the date was bad only because the guy absolutely sucked. The location was amazing and I have since been back many times. This bar is the perfect size, too: it’s not too big and not too small, but more importantly, they let only a certain amount of people up at a time, so you will never have to take baby steps with your arms bent and pressed against your body like chicken wings as you try to squeeze through a crowd. I’m not sure if there’s a theme, per se, but I have gotten chips and guac and a spicy marg more than once, so I’m going to go ahead and say Mexican is a safe bet? Like The Crown, there are indoor and outdoor sections, but the outdoor part is significantly better than the indoor one, which has exactly one sofa and one table. Feels like they are setting us up to fail here, but whatever. The outdoor part is also just really cute. There’s no roof, so obv plan to go on a day/night when it’s not monsooning, and enjoy the best views of Manhattan. The lack of roof also means the whole space looks and feels really open, so it doesn’t get so loud to the point where you’re scream-talking with your date/friends.

It’s the Arlo rooftop in Soho, get it? The Hudson River provides the backdrop to this rooftop bar, so your Instas will be on point. The bar has plenty of seating (and a number of plush chaises), so you won’t be fighting anyone for a seat (or, more likely, staring daggers at that table who just. won’t. get. up). They’ve got an inventive signature cocktail list and a respectable selection of craft beer, plus snacks and small plates that I can personally attest are amazing. (Try the deviled eggs or grilled wings and thank me later.) And when the sun goes down, you can check out what’s going down at the hotel downstairs, where they host all kinds of fun events, like a CBD pop-up, Movie Night, and once, a haiku poetry slam.

Our rooftop is so sweet!!!

Say what you will about this place, but I f*cking love it. It’s in the Meatpacking District, which like, chic, and the music here is on fire. The journey to get from the terrifying college-bar vibes of the first few levels can be a lot, but once you actually get to the roof, all feels right in the world again. It’s the perfect place to go with a small group because there is so much space up there. You can push tables together, sofas together, your two friends you’ve always wanted to date together…etc. The drinks are like, fine, but no one really goes to rooftop bars for a truly quality craft cocktail. They are open pretty much all day and night, so go whenever you feel like, but I personally prefer to spend the day here than the night here because, after midnight, this place can be a cesspool rife with body con dresses and dudes asking what sorority you were in, which just shouldn’t happen if both parties have graduated. The French Toast and anything from the Something Sparkly part of the menu is a perfect pair, so order up! Be sure to wear sunscreen because there is zero shade up here and no one wants brunch with a side of fine lines, amiright?