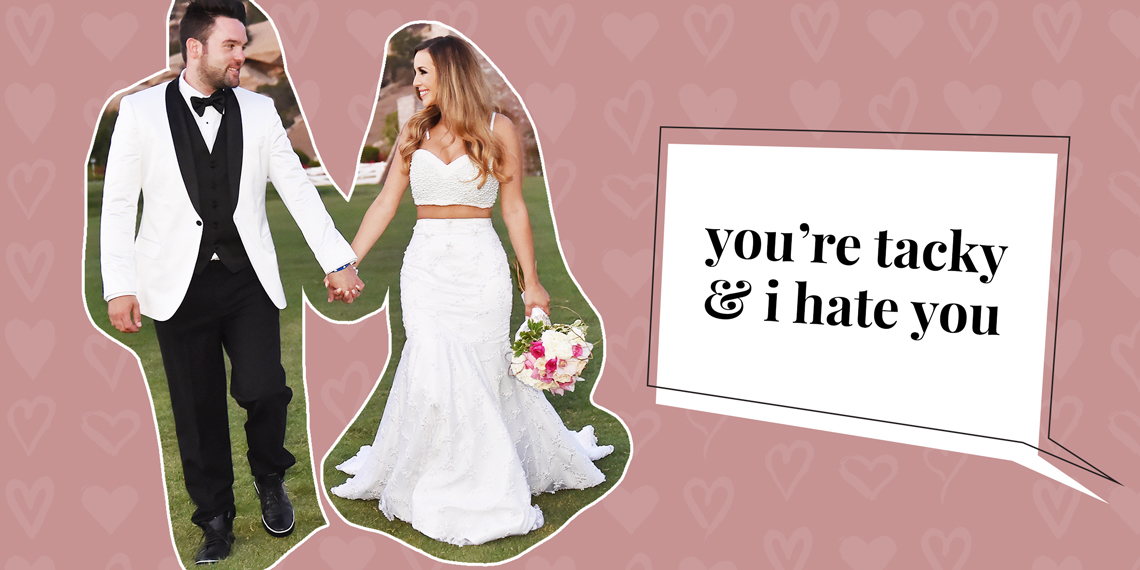 The 6 Trashiest Celebrity Weddings Ever

I don’t know about you, but I love trashy weddings. They make me feel so much better about being single. I get to sit on the sidelines, laughing at how f*cked those marriages are from the get-go. Is that “healthy” and “emotionally intelligent”’of me? No, but you’re not my shrink and she and I have a whole boatload of other issues of mine to tackle before we address why I shame people for their doomed relationships. Anyway, here are some of the trashiest celebrity weddings of all time. And fun fact: more than half of these weddings also have leaked sex tapes. Not really material to the article, I just thought it was an interesting correlation.

Britney famously got married in Las Vegas to some high school friend of hers, and she somehow managed to get trashier than that at her next wedding. How, you wonder? She married Kevin Federline. Between the pregnant baby mama he had on the side when he first met Brit and the way-too-hasty of a courtship, this couple was fated to have a trashy wedding. The bride and groom parties each had their own Juicy Couture sweatsuits custom made for them. Sure, they were as cool at the time as those one piece bachelorette party swimsuits from Private Party are now, but trust us, it gets worse.

Britney’s bridal squad’s suits were baby pink and encrusted with diamonds, while she donned an all-white tube top tracksuit that looked as low-rent as her wedding dress. Kevin and his party wore Juicy Couture sweatsuits as well, but they had “PIMP” embroidered on the back. Except for Kevin’s dad—he had “PIMP DADDY” on his. Oh, and the worst part? This was a surprise wedding. Britney and Kevin invited heir guests under the guise that they were attending an engagement party and the invitees were probably like, “oh, we’ll go because we know they’ll never make it to the altar.” But it turns out they were actually AT the wedding itself, so they were probably so caught off guard no one could scream “I object!”

How can we forget when Scheana wanted to put the “ass” in class and insisted on having a wedding dress that she could twerk in for her first dance with her husband? What an iconic cultural touchstone. Scheana is also the only girl I can think of to ever have a crop top wedding dress.

Aside from the crop top dress, Scheana’s wedding has something else in common with your trashy cousin’s wedding: someone got punched in the face. And of course, that douchebag was James Kennedy. James Kennedy getting punched in the face isn’t even the trashiest part. The trashiest part was Scheana adorning her apartment with giant blown-up photographs of her and Shay from the wedding. Pretty sure she still has the ones of just her hung up in her apartment.

Okay, rumors swirling that you got married for fame alone makes for a trashy wedding. But for the record, I strongly disagree with this allegation. If a guy who is 6’9” proposes to you, you 10000000% say yes. This hot mess of a marriage ended quicker than my almond milk expires. The only good thing about this wedding is that it put ten million dollars back into the economy. And people think Kim’s selfish?

Fun fact: Pamela Anderson got married in a bikini. Twice. I can’t even get my picture taken in a bikini without doing a kegstand of FitTea and crying to detox myself of any water weight before I FaceTune the sh*t out of my stomach, so you go girl! Pamela first married Tommy Lee…96 hours after they met. Did we mention he met her when he was high on ecstasy? But who are we to judge? I’ll probably meet my future husband when I’m blacked out from vodka sodas. Anyway. Pam and Tommy got married in Cancun. That’s like, Cabo’s deadbeat cousin, so that in and of itself is a warning sign. That marriage *shockingly* ended after two children, a leaked sex tape, a prison sentence, and a shared diagnosis of Hepatitis.

So Pamela went on to marry Kid Rock. I know what you’re thinking: who would find Kid Rock attractive? Not even female Kid Rock megafans find Kid Rock sexually attractive, probably because the only men they find attractive are their first cousins. But I digress. Pam and Kid Rock got married on a yacht in Saint Tropez ,which is classy until you factor in that A) Pam was wearing a bikini, B) Kid Rock was wearing a white V-neck and a Detroit Tigers baseball hat, and C) Kid Rock’s website said they were “registered at Wal-Mart.” I honestly need to bleach my brain after reading this.

Instagram famous Emily married trust fund dumpster baby Sebastian Bear McClean in what has to be the most underwhelming wedding of all time. Legit, if you scroll through these people’s respective Instagram’s, they both look aggressively bored. Emily wore a mustard suit from Zara to their nuptials, held at a New York courthouse after a quickie engagement. Like, if you have that in common with Justin Bieber and Hailey Baldwin, your marriage is already doomed.

Thank you for your beautiful messages.Its such a special day for us both.Your love and support means so much x vb????

You’ve seen her fashion sense. You’ve seen his bulge in underwear ads. So it hurts my cold, dead heart to say that these two had a trashy wedding. They wore coordinating outfits. Twice. First, Victoria wore a white Vera Wang gown, as per celebutante tradition, but then David was like “hey! I’ll wear an all-white tux and we’ll be twinsies!” (I paraphrase.) David, a word to the wise: when you marry a member of one of the most iconic girl pop groups of all time, try not to look like a Backstreet Boy reject.

It gets worse. During their send-off, they wore coordinating all-purple outfits. Just because you two probably share hair and makeup products, doesn’t mean you should share the same outfits. That Laura Ashley sh*t wasn’t cute when our moms forced us to do it for our Christmas card pics, so why would it work for your wedding?

Oh, and they cut their wedding cake with a sword. A SWORD. And this woman is supposed to be a tastemaker in the fashion world. Send help.