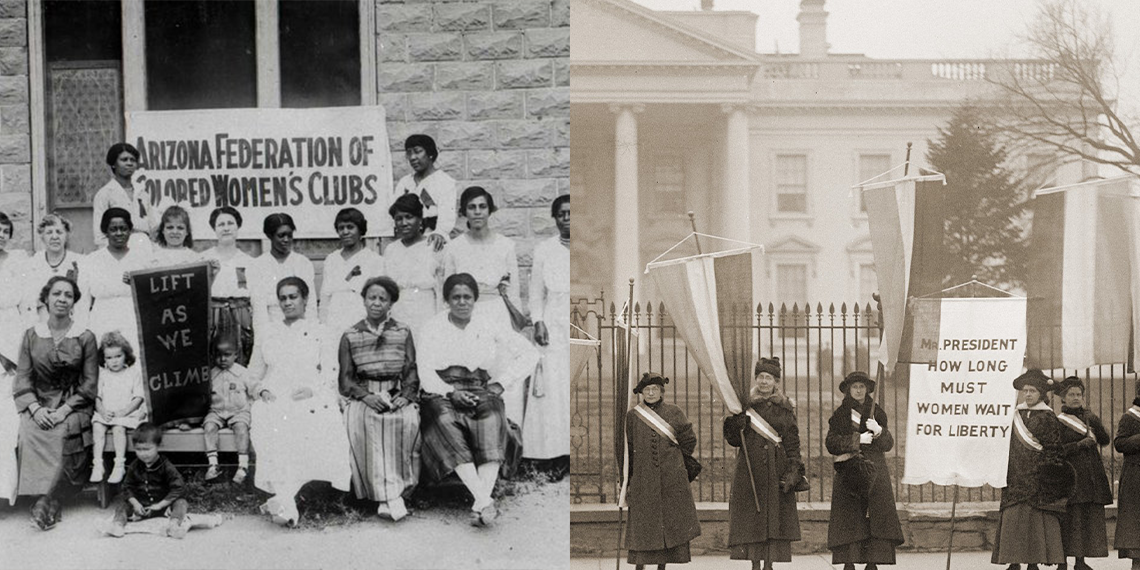 The 19th Amendment ‘Guaranteed’ Women’s Right To Vote. Some Never Stopped Fighting To Use It.

On August 18, 1920, Tennessee became the 36th and final state required to ratify a constitutional amendment guaranteeing women the right to vote.

In theory, the 19th amendment extended suffrage to all women with citizenship. In practice, it guaranteed this right primarily for white women, many of whom were already permitted to cast votes per state laws. Across the country, non-white women remained at the mercy of state laws that would continue to disenfranchise them for another century.

That is, if it stops tomorrow.

It’s often repeated that voting is our most fundamental right — the result of wars fought and won throughout the 20th century. The uncomfortable truth is that voting remains a privilege for too many, as bad faith leaders wage constant battles against minority communities to suppress participation in the political process. These battles continue today.

It’s a mistake — one that ignores the boundless persistence of white male supremacy — to reduce the fight for women’s suffrage to a singular moment in U.S. history. Women were participating in the political process before this country was colonized, and had to protect their right to do so long after a few words in the Constitution vowed to do it for them.

To honor this anniversary, we took a look at the winding, thrilling, disappointing, and incomplete path towards full voting equality for women in the United States. Please note this is far from a comprehensive timeline.

Historical records indicate that Native women participated in the tribal political process long before colonization, and matrilineal traditions gave many influence and power in their communities. But in some areas, colonization corrupted existing egalitarian social structures.

Throughout the early centuries of America, Native women were deprived of citizenship, were legally wards of the government, and were locked out of voting rights. Though some questioned the value of citizenship, they were nonetheless subject to forced assimilation.

New Jersey passed its state constitution granting the right to vote to all inhabitants with property, including women. A 1790 state law affirmed that this was not a mistake, and women could indeed vote in New Jersey.

Single women voted for decades  (married women couldn’t because their property went to their husbands after marriage). Until 1807, when losing politicians began accusing women, people of color and immigrants of voter fraud.

Philip Mead, chief historian at the Museum of the American Revolution in Philadelphia, described the moment in time to The Washington Post:

“This was a moment, in 1807, where Americans were having serious doubts about their democracy. I think were looking for a big action they could take to restore confidence in the voting system, and they crudely scapegoated women, people of color, immigrants.”

The law was changed to limit voting to white men. New Jersey was just one of many states that retroactively took away women’s voting rights.

Frederick Douglass with his wife, Helen Pitts and her sister, Eva Pitts

The first women’s rights convention was held in Seneca Falls, NY. The convention passed 11 resolutions to pursue — its “Declaration of Sentiments” — which included a demand for the right to vote.

The voting resolution might not have passed without Frederick Douglass, who was the only Black American to attend the Seneca Falls convention.

His speech convinced other attendees to support women’s suffrage, which was still the only resolution not to pass unanimously.

Sojourner Truth in around 1864. Courtesy of the Library of Congress

Sojourner Truth was among the most well-known abolitionists and women’s rights activists of her time. She was invited to speak at an 1851 gathering of suffragists, where she gave what has been referred to as the “Ain’t I A Woman?” speech.

The speech was a huge moment in the trajectory of women’s rights. But there’s a fair amount of controversy around it. Truth was born in New York, but the most popular version of the published speech contains Southern dialect that does not reflect the way she actually spoke. It’s likely that white abolitionist Frances Dana Barker Gage changed Truth’s accent and word choice to misrepresent her background.

In any event, most versions of the published speech include a version of this iconic line:

“Well, if woman upset the world, do give her a chance to set it right side up again.”

1868: Ratification of the 14th Amendment

This extended citizenship to Black Americans, but not the right to vote.

Mostly because they were thirsty.

Sure, some men in Wyoming wanted women community members to have a voice in their democracy…

Others hoped the new law would draw more women to the state. At the time, the state had six times as many men as women.

Clearly these gentlemen didn’t agree with their brothers in Wyoming. Courtesy of the Library of Congress.

1870: Ratification Of The 15th Amendment

Though the suffrage movement found its origins in abolitionism and many suffragists assisted the anti-slavery war effort, movement leaders largely opposed the 15th amendment unless it also enfranchised women. Plenty were furious that Black men were granted the right to vote before white women. Many were openly hostile to the idea of incorporating racial equality into the women’s movement.

Some white suffragists largely distanced themselves from universal suffrage that would include Black women, for fear of alienating Southern legislators (and their own racism).

At this point, prominent suffrage organizations had split to pursue separate approaches, while Black women were further excluded and marginalized within the movement they were instrumental in shaping.

1872: Thousands Of Women Attempt To Vote In The Presidential Election

They knew it was illegal, but planned to file lawsuits after they were blocked from voting.

Leading women’s rights activist Sojourner Truth was turned away and arrested, despite working for Grant’s re-election campaign. Susan B. Anthony was also arrested and charged.

Virginia Louisa Minor’s case made it all the way to the Supreme Court, which in 1875 found the Constitution did not give women voting rights.

The suffrage movement shifted its attention to a constitutional amendment.

A casual 42 years before its ratification

1896: Founding Of The National Association For Colored Women

Members of the Arizona Federation of Colored Women’s Clubs in around 1909. Courtesy of the Library of Congress.

A number of Black women’s civil right’s groups merge to form the National Association For Colored Women, after which Black women’s suffrage clubs emerged across the country

Mary Church Terrell, one of the first Black American women to earn a college degree, led the new organization, which was co-founded by Josephine St. Pierre Ruffin, Ida B. Wells-Barnett, Harriet Tubman and others.

Their motto: “Lifting as we climb.”

Mary Church Terrell was one of few Black women permitted to attend meetings of the National American Woman Suffrage Association.

She was invited to speak at its gathering in Washington, D.C., where she emphasized the value of Black women’s political participation and the challenges they face in society.

German actress Hedwig Reicher wears the costume of “Columbia” in front of the Treasury Building in Washington, District of Columbia, on March 3, 1913. Courtesy of the Library of Congress.

The National American Woman Suffrage Association and Alice Paul organized a protest on Pennsylvania Avenue the day before Woodrow Wilson’s inauguration. At least 5,000 women — and as many as 10,000 — attended. Black women were discouraged from participating and asked to march in separate processions.

The Delta Sigma Theta Sorority had formed at Howard University just months earlier. In spite of the racism they were sure to encounter, its founding members attended the march in D.C. as their first public act. Mary Church Terrell joined them.

Ida B. Wells-Barnett also attended the march. Even though she founded and inspired suffrage clubs across Illinois, Wells-Barnett was instructed to walk with a segregated procession at the back of the march.

“I shall not march at all unless I can march under the Illinois banner,” she reportedly said.

Wells waited to enter the parade until the Illinois delegation passed, when she jumped in to join them.

The march was met with violence. Rowdy spectators attacked and harassed women on the route. At least 100 women were hospitalized with injuries.

The landmark vote in the nation’s most populous state gave the suffrage movement a shot of momentum. Black women’s clubs and the NAACP were critical to the referendum’s success

Tennessee became the 36th state needed to ratify an amendment guaranteeing women the right to vote, just over a year after it passed the Senate.

Many states already allowed women to vote by this point. For some women, the 19th Amendment now guaranteed this right.

It did not hold the same promise for Black women, who were excluded by state laws, discriminatory Jim Crow practices, violence and harassment.

Native women, many of whom were not yet considered citizens, were also excluded.

But states continued to impose restrictions and refused to recognize Native American citizenship; some states conditioned voting rights on federal assimilation and the abandonment of tribal governments or lands.

A young John Lewis leads 600 marchers across the Edmund Pettus Bridge in Selma, Alabama to demand respect for the constitutionally protected voting rights African Americans of all genders were still denied.

President Lyndon B. Johnson signs the Voting Rights Act into law, which prohibited racial federal discrimination in voting and included provisions to safeguard against it. A key provision required states with a history of racial discrimination in voting to clear new election laws with the federal government to ensure they don’t suppress minority voting or political representation.

The VRA also strengthened voting rights for women, immigrants, and Native peoples. But even this did not end the disenfranchisement of BIPOC in America.

The March on Washington on August 28, 1963. Courtesy of the Library of Congress

In Shelby County v. Holder, SCOTUS found that the formula used to determine which states need special permission before changing their election laws was unconstitutional.

This made the provision itself nearly useless, allowing states to move forward with election changes without regard for how they might disenfranchise BIPOC.

In past decades, states have gerrymandered districts to dilute the impact of Black voters. Others have implemented onerous ID requirements that disproportionately impact minority voters and Native people who live on reservations. Yet others have eliminated same-day registration, early voting, and Sunday voting.

And most recently, the president and his loyalists have spread false information about mail-in voting while sabotaging the ability of the United States Postal Service to process ballots for the November election he is widely expected to lose.

These restrictions disproportionately impact women and minorities, who are more likely to rely on flexible voting options.

Though President Trump himself has requested a mail ballot this year, he continues to raise the specter of voter fraud to sow fear and suspicion of November’s election result.

As you prepare to cast your ballot this year, remember this is not the first time that women and people of color have been accused of voter fraud by politicians who didn’t like to lose.

Remember the New Jersey women whose right to vote was revoked through vague allegations of “voter fraud” after decades of voting freely. Remember the Black women who never stopped fighting to exercise the rights they helped win for white women.