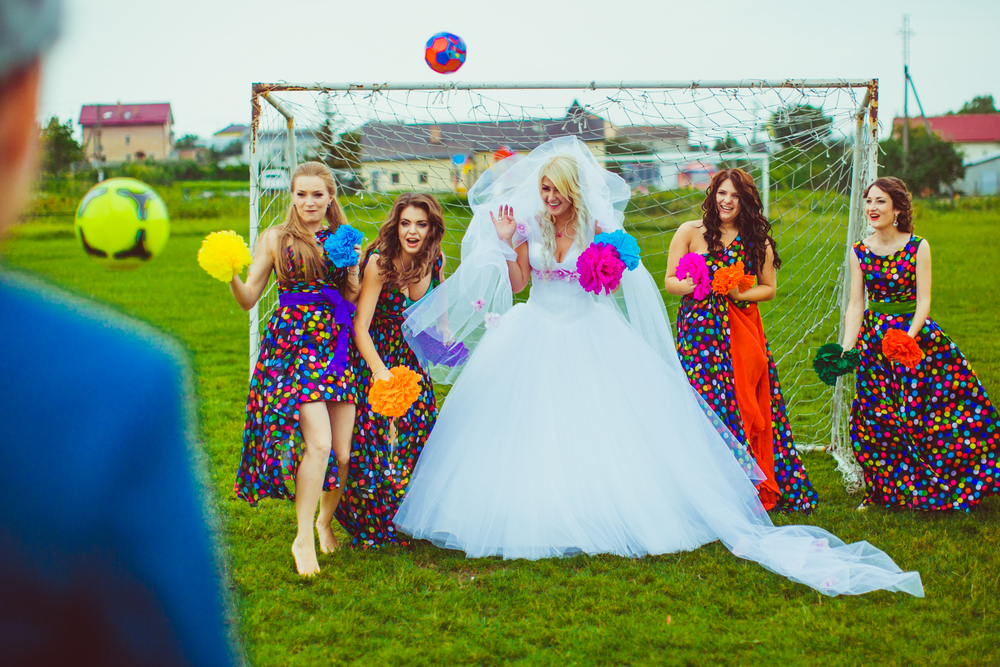 Now that the Super Bowl is officially over and we’re done pretending to care about it (shout out to Kylie Jenner and Stormi for stealing everyone’s thunder… bad weather pun 100% intended), let’s talk some shit about insane sports fans. Namely, guys who feel the need to have a sports wedding, or just fit sports into their wedding somehow. I might just still be salty over the fact that although I chugged mixed drinks and housed buffalo chicken dip as silently as possible while the ball was in play, the dudes in the room were incapable of keeping their mouths shut while Justin Timberlake was performing. Maybe I’m just feeling triggered by the idea of Lady Doritos. IDK. Whatever it is, guys who are such obsessive sports fans that they need to incorporate it into their wedding need to chill TF out.

You hear it all of the time. Brides-to-be are like, “I’m spending all of everyone’s money on pink sparkly shit and mason jars, so it’s only fair that I let him wear a jersey in our engagement shoot!” Um… hold on there. There’s a serious difference between making a couple of compromises while planning your wedding and turning the whole thing into a shrine to your fiancé’s fragile masculinity. If you want to make him feel involved throughout the process, let him pick the signature cocktail or give the groomsmen some quirky socks or some shit. Your wedding is not the time or place to remind everyone that he has an unhealthy obsession with a team of dudes he’s never even met. Here are a few sports wedding things you need to be aware of so you’re prepared to shoot them down before they ever come to fruition.

Do you think Gisele let Tom Brady wear his jersey during any event related to their wedding? Nope. No chance. He probably has no desire to wear it anytime besides when he’s literally playing football. Considering it’d be pretty cringeworthy if Tom wore a jersey in a save the date photoshoot, imagine how stupid it’s going to look when a regular guy does it. Grown men wearing sports jerseys in any way, shape or form really just scream, “I could have gone pro if I didn’t have that pesky knee injury sophomore year of high school!”

Such a unique save-the-date idea! ???? Link in bio for everything you need to know about save-the-dates. {Photo: @einphotography}

Jokes About Loving You “Even When It’s Football Season”

I get that humor is totally subjective or whatever, but this is never funny. If the person you’re about to sign up to spend the rest of your life with thinks that it’s funny to joke about not being able to love you while he’s cramming Tostitos scoops into his mouth and yelling at a TV screen, that’s a red flag. You’re still able to keep track of whose Instagrams he’s liking while you’re watching The Bachelor, so any sports-excuses he’s making are totally invalid.

Love & football ???? Who else is excited for the big game this Sunday?! {Photo: @bjonesphotos}

Proposing To You At A Game

Why do I even have to explain why this is the worst idea of all time? Do you really want to remember your proposal as an event surrounded by hundreds of drunk, sweaty, screaming strangers? Do you even want to risk having a Bud Light can in the background of any photos? Probably not. Best case scenario, you’ll provide the content for a random onlooker to get a viral tweet. Congratulations. Obviously, you don’t have full control over when you’re going to get proposed to, but try to drop hints like “I’ll fucking kill you if you propose to me at a game” as frequently as possible.