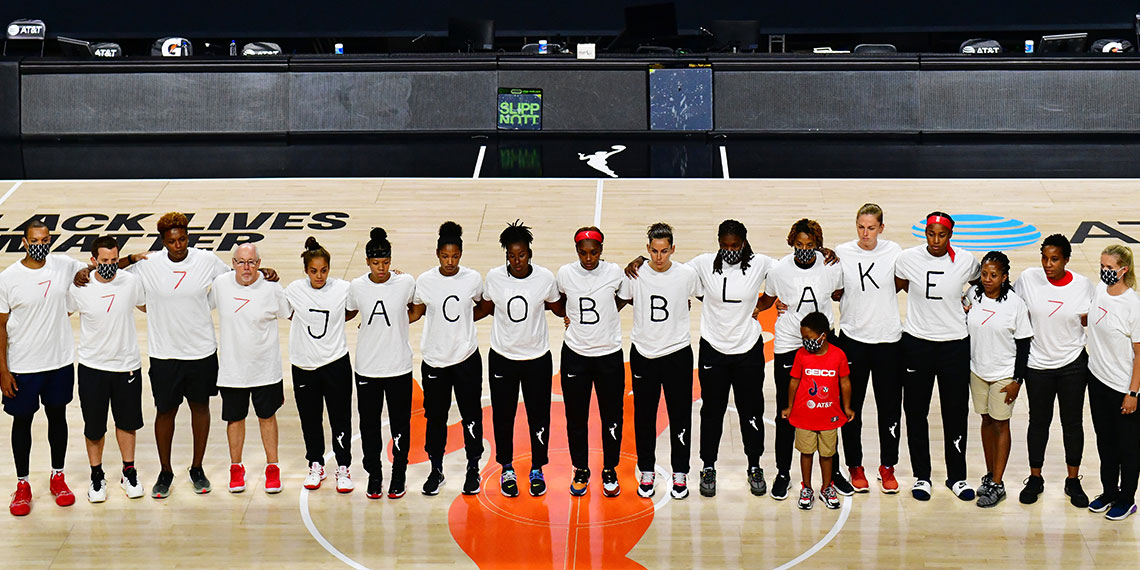 As we continue to navigate our way through a global pandemic, professional sports have largely resumed play in the past few weeks. With various safety protocols in place, including full quarantine bubbles for several sports, leagues are back up and running, desperate to make up for precious lost months. The NBA, one of the first leagues to come up with a plan to return to the court, is currently holding their playoff tournament in a bubble at Walt Disney World in Florida. But on Wednesday, their postseason came to a sudden halt when players chose to strike rather than play their scheduled games in protest of the police shooting of Jacob Blake.

Last Sunday, a police officer shot 29-year-old Jacob Blake seven times from behind in Kenosha, Wisconsin. In the days since, Blake has fought for his life in the hospital, and thousands of others in Wisconsin and around the country have returned to the streets to protest another senseless act of police brutality against a Black man.

Many players in the NBA have long been outspoken supporters of the Black Lives Matter movement and the fight to dismantle systemic racism, and this summer’s return to play has reflected those priorities. Players have made it clear that basketball is not their only priority, with LeBron James saying, “The same energy we had on the floor is the same energy we have toward having justice for Breonna Taylor and her family.” In the bubble, courts are painted with BLACK LIVES MATTER in bold letters, teams have knelt before games, and players have used their interviews to call for justice for Breonna Taylor. But this week’s events have given the movement a new sense of urgency, and the league’s players have taken matters into their own hands.

Reports of a possible strike began to circulate earlier in the week, with players from the Boston Celtics and Toronto Raptors meeting to discuss whether they would play the first game of their round two matchup on Thursday. The first official news came on Wednesday afternoon, when the Milwaukee Bucks didn’t show up on court for the fifth game of their first round series against the Orlando Magic. Within the hour, the NBA, along with the players’ association, announced that all of the remaining games scheduled for Wednesday would be rescheduled.

The NBA and the NBPA today announced that in light of the Milwaukee Bucks’ decision to not take the floor today for Game 5 against the Orlando Magic, today’s three games – MIL-ORL, HOU-OKC and LAL-POR have been postponed. Game 5 of each series will be rescheduled.

Many NBA players have used their personal platforms to call for change, but according to Celtics guard Marcus Smart, “it’s not working, so obviously something has to be done and right now our focus really shouldn’t be on basketball.” Noting that the playoffs are important, Smart said that there is “a bigger issue, an underlying issue that’s going on and the things that we’ve tried haven’t been working. So we definitely need to take a different approach and we need to try new things out to try to get this thing working the way that we know it should and get our voices heard even more.”

Shortly after the NBA’s decision, the players of the WNBA, also holding its season in a bubble in Florida, announced they would not play their scheduled games on Wednesday. Elizabeth Williams, who plays for the Atlanta Dream, read a statement on behalf of the players on ESPN, in which she said, “We stand in solidarity with our brothers in the NBA and will continue this conversation with our brothers and sisters across all leagues and look to take collective action.” In a powerful display, players from the Washington Mystics wore shirts that spelled out Jacob Blake’s name, and were marked with seven symbolic bullet holes on the back. Mystics star player Ariel Atkins spoke to ESPN about the decision to take a stand, saying “we’re not just basketball players, and if you think we are, then don’t watch us.”

Along with Wednesday’s complete basketball strike, three Major League Baseball games were postponed, as well as several Major League Soccer matches. Later in the evening, tennis star Naomi Osaka announced in a message posted to social media that she would not play her semifinal match in the prestigious Western & Southern Open, scheduled for Thursday. Shortly after Osaka’s message, the tournament, along with both the men’s and women’s tennis tours, announced that all play would be “paused” on Thursday, in order to “collectively take a stance against racial inequality and social injustice.”

For the NBA and WNBA, it’s unclear where the season goes from here. In an all-NBA player meeting on Wednesday night, it was reported by NBA analyst Shams Charania that two teams, the Lakers and Clippers, voted to call off the remainder of the season, while the remaining teams voted to continue playing. The Lakers are home to LeBron James, who has been extremely outspoken about the Black Lives Matter movement. In the meeting, James reportedly expressed frustration that the league’s owners have not taken more action in this fight, and called out NBA Commissioner Adam Silver for being largely absent from the quarantine bubble. Earlier in the day on Wednesday, as the Bucks sat out that first game, James tweeted a message of frustration.

FUCK THIS MAN!!!! WE DEMAND CHANGE. SICK OF IT

The players in the WNBA, however, have full support from their commissioner, Cathy Engelbert. She was on the court with the players on Wednesday as they made the decision to strike, and she told ESPN immediately after that, while she hopes they will decide to finish the season, the league “absolutely supports them.” For both the NBA and WNBA, Thursday’s games are currently still on the schedule, but a further strike certainly isn’t out of the question.

Across both basketball leagues, a common sentiment from players is that this moment is too important to let games and standings drown out the conversation. When George Floyd was killed in May, sports were still indefinitely on hold, so it was impossible to turn on a game and ignore what was going on in the world. Players used their time off to join protests, use their voices, and fight for what’s right. And now, even though they have returned to the court, they’re showing us that their priorities remain the same, and some things are just more important than basketball.

Editor’s Note: A previous version of this article referred to the act of sitting out games as a “boycott.” The article has been updated to reflect that by withholding labor, the players are striking, not boycotting.