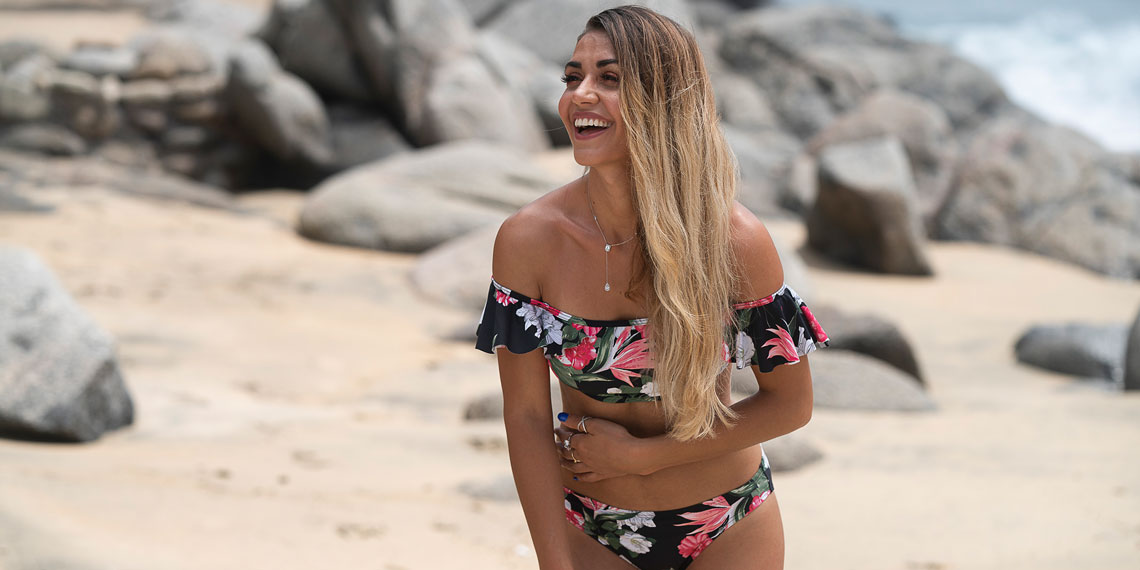 Shushanna Is Saltier Than The Gulf Of Mexico: Diggy Moreland On ‘Bachelor In Paradise’

Another week where I haven’t been fired yet (well, I think not, because my Betches keycard still works) so I’m thankful. *points to the sky* Summer’s all but over, however, people are still so drunk in love in Paradise. Let’s recap the lives of the beach bums who are down in Mexico.

We pick episode eight up with Eric leaving on his date with Cassandra while Angela bawls her eyes out. She’s been crying for 3 hours straight, so at this point she’s blind. Eric and Cassandra’s date looks kinda cool and relaxed. Remember when you would go on a date at the food court in the mall? Your mom would drop you off and just drive around until you were ready? Yea, picture that same setting, just the cashier has on a sombrero. The date progresses well, and Eric takes Cassandra to a latin Medieval Times where they’re short-staffed, so this is no longer a date—one of y’all is getting run over by a horse.

Back on the beach, people continue to trash Eric, mentioning how honesty is key, and Colton is hearing all this. For some reason, this triggered a memory in Colton’s mind when he saw Tia throw away some perfectly good avocado, or something, and he can’t tolerate that sort of negativity in his relationship. What REALLY happened, you ask?

Producer to Colton: You know, they haven’t cast the Bachelor yet?
Colton to Producer: Forreal? BRB.
(Yes, he spelled out B-R-B)

He literally blindsides Tia with this revelation that he can’t get there (pro tip: use Waze), and she doesn’t know how to react. Picture the reaction if Stevie Wonder was a magician and he was able to tell you the card that you picked out of a deck. Yes, THAT kind of surprised. Colton cries in the car because his seatbelt doesn’t fit, but those will eventually turn to tears of joy when he finds the sleeves to go with his sweatshirt. Tia leaves soon after because she finds out that it’s the last day for Red Lobster’s all-you-can-eat shrimp, and an event this large only happens once a year. This marks exit #2 in the Bachelor franchise where Tia exits not knowing why. Hit the Men In Black mind eraser, and you’ll be fine. END. OF. COLTIA.

Waiting for Eric to get back from his date, Angela broke the emergency glass, and brought out a cute little number that will definitely have Eric thinking: “What have I done??” He returns from his date and speaks to everyone but Angela like he doesn’t see her. THE GUILT HAS SET IN, PEOPLE! He eventually pulls her to the side and tells her that he thinks they’re on different pages. Huh?? I’m confused at this point because “all in” seems pretty self-explanatory to me. I mean, how you gonna be on different pages when the book only has one page? Anyway, she ends the convo with: “K.” I’ve been single for a while, but I DO know when a girl ends a convo with “K,” she’s looking for matches with which to set you and/or your sh*t on fire. (Shout-out to Left Eye from TLC.)

Angela then snitches to Cassandra to tell her about how Eric “is,” leaving Eric with his hands tied.  Scariest sight known to man: Two women who unite with a common enemy. Cassandra essentially curses him out with a smile, saying that he misled her. Note to self: Don’t go on a road trip with Eric—he doesn’t know how to lead.

Next morning, we get breakfast and a new arrival, Shushanna. Short, cute, thick accent, I’m a fan. As if there wasn’t enough food on the beach, we get more, with the arrival of “Scallop fingers,” (aka Christen from BIP season 4). Two more girls means at this point four girls are on the chopping block. Digging the European connection, Shu chooses Kamil for her date, and Scallops takes John.

*CUE THE WATERWORKS FROM ANNALIESE*

People, I’m telling you, I’ve seen less water from a fire hydrant. The fact that Annaliese isn’t wearing a life preserver all day is surprising, because I feel like she can drown from her tears at any moment. The couples leave for their date, but we see only a small fraction of it because Annaliese’s waterworks are far more entertaining. (Not to be overlooked, Jorge is on ANOTHER date. When does this dude SLEEP?)

Unless you’ve been sleeping under a rock, you know that Ashley I. and Jared are engaged, and now we get to see how it went down. Jared takes her to the beach and says, “Look, I can’t make LA rent without you, let’s make it official,” and she says yes. Jared, if you do indeed have a gun to your back making you propose to her, BLINK TWICE. We can save you.

Everyone’s happy… except Kevin, because he’s forced to witness his ex get engaged. He’s mostly mad because he knows he won’t get invited to the wedding, and it’ll be open bar. Kevin and Astrid later get a date card where Astrid proves that Kevin had an A before, but she’s A+ and he’s in good hands.

Kamil returns from his date, and Annaliese grabs him quicker than Krispy Kremes after the “Hot Donuts Now” sign comes on. He pretty much tells her, “Like a two-legged dog, you ain’t going no where.”

It’s rose ceremony time, and we start it with girls that are free agents: Shu, Olivia, Chelsea, and Christen. It all goes like a normal cocktail party, until Chelsea decides she needs to “save” Kamil. Let’s call it the mother in her. She feels the need to free Kamil from Annaliese, to which Annaliese says, “I’ve lost 16 men in Paradise. If I lose number 17, I’m stabbing someone.” Chelsea gets the hint, backs off, and finally accepts her fate. Kamil also has to let Shu down easy like a new escalator. “You thought we had a connection on our date, huh? Ha, that’s cute. NEXT!!”

We get a last-minute addition to the guys’ side, New Zealand Jordan (from Winter Games) giving the girls one hour to show him who’s the best kisser. Rose Ceremony ensues and goes as follows: Kevin-Astrid, Jordan (American)-Jenna, Chris-Krystal, Joe-Kendall, Eric-Cassandra, Jordan (New Zealand)-Shu, John-Olivia, and Kamil-Annaliese. We lose Chelsea, Angela, and Scallops. Drama ensues: Scallops doesn’t leave without passing out and getting a free physical, which works out because she doesn’t have health insurance.

Episode 9 kicks off with Astrid giving us the Paradise couple recap and how perfect everything is. Welp, the producers hate tranquility, so in walks Chris Harrison with his perfectly manicured cuffs. Surprise, it’s “earn your keep” day in Paradise! Jade, Tanner, Evan, and Carly arrive and interview the couples to see who’s most deserving of this EPIC date they have to give away. They deem Joe and Kendall the most worthy… of watching their kids. Yes, the EPIC date is for the foursome of BIP alums while Joe and Kendall play Part-Time Daddy Day Care. I’m calling Child Protective Services on this one, because I’m pretty sure Tanner overarm threw his child into Joe’s arms as they ran to enjoy being de-babied. Kendall handles her “child” with ease, while Joe struggles to keep the child breathing. They barely make it out, and they get a quick breather outside of Paradise, where Joe reveals he has commitment issues. Makes sense since he has Boost mobile and pays month to month.

Eric and Cassandra are stuck in Paradise surrounded by loving couples, and Cassandra is just left counting her fingers and toes. Eric must’ve used Waze because he got to the friend zone QUICK. He tells her he’s good where he’s at, and she says: “Like the cheese you talk about, don’t string me along.” After taking a walk on the beach like a 90’s Mariah Carey video, Eric realizes that he ate too much cheese and his emotions are backed up. Exit stage left, Eric.

One of the many date cards hidden on the island is found, and it’s for Chris-tal. They go on the date, Chris says he’s falling for Krystal, and she says “Thank You.” Krystal, he said he’s falling for you, he didn’t pass the salt, so I’m gonna need MORE than a thank you. Either way, Chris loves it, and they end up dancing in some koi pond to Mexican Jimmy Buffet.

Back on the beach, Jordan leads the most epic game of Truth or Dare, which should be called “Put Shushanna on Blast.” All the questions are New Zealand Jordan’s sick way of telling Shu, “KAMIL. DOESN’T. WANT. YOU.” She doesn’t hear him, though, because her heart is beating too loudly from staring at Kamil. Kamil, I’m gonna need for you to know where the Emergency Exit is at all times. Also, please remember, the closest exit may be behind you.

The next day, Jordan gets a date card and wants to take Shushanna on a date to help her get over the hump that is Kamil. She says no because she has to wash her hair (lie) and watch Kamil sleep (truth).  Jordan takes Cassandra because he’s not trying to create a personal paradise by going on a date by himself. Meanwhile, Shu grabs Kamil for a last-second Hail Mary chat. Convo recap below:

Shu: How do you feel about us?
Kamil: There’s no connection between us. Not now. Not ever. Not in 2036. Do you understand?
Shu: I don’t believe you. I’m gonna go to the bathroom, and check back with you to see if you had a change of heart.

At this point, not sure who’s saltier: Shu, or the Gulf of Mexico. Annaliese gets wind of this and pretty much tells Shu, “I’ve lost 12 men in 3 weeks. The next one that leaves me will be in a body bag. He’s mine.” Essentially, this is the 2018 Brandy/Monica “Boy is Mine” remake. Not sure who won back then, but Annaliese definitely wins this one.

Towards the end of the episode, we get a brand-new arrival who might be able to take Shu’s mind off of Kamil. He’s wearing khaki shorts and his glasses are fogged up, he’s…..Diggy! (Well, this is awkward.) Diggy shows up not knowing what he’s walking into, but Shushanna gives him all the signals that he needs to Matrix and dodge that bullet. Olivia gives her a thank you card that even Hallmark couldn’t replicate because she wanted Diggy to be here. Finally, Shushanna doing something RIGHT. Diggy and Olivia’s date was simple, but romantic, and from what I hear, they didn’t let him eat prior to, nor at the date, so he was HANGRY, but that can’t be confirmed. Olivia and Diggy end the night by being serenaded by a one man Mariachi band.

Back on the beach, Shu tries to fake liking New Zealand Jordan, as she watches Kamil’s picture burn in the fire. (This sentence brought to you by the sponsors of the festival Burning Man.) Kamil, as a witch, we know this isn’t the end, and you have more tricks up your sleeve.

How does it end? Does Shushanna watch Kamil sleep for the 6th time in 3 days? But more importantly, DOES OLIVIA GIVE ME MY GLASSES BACK?!

We’ll find out next week!