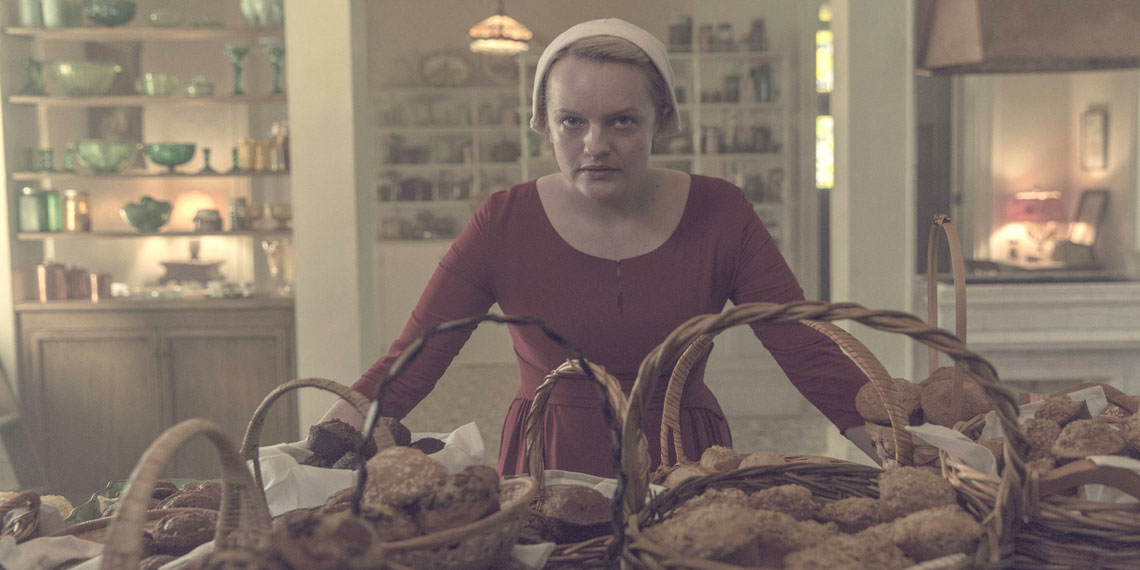 How are we feeling, Handmaid-heads? This week’s recap is rated NC-17 so please don’t read it out loud to your kids! Considering how much of this week’s plot revolved around semen, it’s really the best I could do. We begin with just a snippet of Symphony Number 9 by Beethoven (deep cut) before we go straight to June, limping her way back to Commander Zaddy’s house with Aunt Lydia. Apparently Lydia’s plan to move June out of the Lawrence house from two episodes ago is no longer a thing.

Lydia: You’re a good girl, OfJoseph.
Me: Didn’t you and all the other aunts just do a roundtable shit talking sesh of her? Two-faced bitches…

Turns out the Lawrences have redecorated to “D.C. standards” according to “Commander Waterford’s proclamation.” Now the Waterfords aren’t only rich family in Gilead that can’t bring themselves to buy a f*cking lamp.

In the kitchen, June catches up with Beth the Martha, who tells her that the delicious basket of scones on the table are actually a message from the #Resistance telling her they can’t get any more meds for Madame Zaddy, whose mental illness has been getting worse. This is why we take our meds, people.

Martha Beth: Scones mean no.
Me: Aaaaand I know what my new tattoo is going to say!

June wastes no time letting everybody know about her plan to free all the children in Gilead. Apparently she’s completely cured of the insanity she displayed the past two episodes, and nobody is going to bring it up again, just like the time I lost my sh*t during Spring Break and had to leave Cabo early. Oops.

June: I’m going to free all the children!
Martha Beth:

June: You know you could free your wife and take her to Canada where she could get help.
Lawrence: Okay well you’ve been home for less than five minutes, so why don’t you chill?

At the Grocery Store AKA The Den of the Resistance

June heads over to the juice aisle, which is basically a freedom fighters’ bunker at this point, to tell OfRobert about her amazing plan to free all the children.

OfRobert: I can’t talk to you. They’re watching us. And you’re really conspicuous.

Finally, somebody tells her.

The handmaids are then all ushered to a stadium that is conveniently attached to the grocery store for an “inspection” by none other than Fred Waterford, the human embodiment of the word “ugh”. He has taken his micropenis compensation tour to DC, where he’s doing fabulously. He arrives and starts bothering June immediately, like an ex who texts you “merry Christmas” after not seeing him for seven months.

Fred is joined by Commander Winslow (or, as he is known in the comment section, Commander Stabler) and Serena Joy, who opts not to mention the fact that last time she and June hung out, June tried to stab her with a tiny knife. Tactful.

Stabler immediately starts going in on all the handmaids and points out Janine’s new velvet eyepatch as not “regulation.”

Commander Winslow then turns to June to ask her how she’s liking living with Commander Lawrence, to which she replies that he “treats her with respect.”

June has been free for 48 hours and wastes no time breaking into offices to steal important documents. She’s in Commander Lawrence’s office, which is literally full of books. Stacks and stacks of books—Game of Thrones, Harry Potter, The Other Boleyn Girl—he’s got ‘em all. Just as she’s about to give up her search, June finds a valuable ally in Madame Zaddy, who can probably still smell June’s crazy and sees her as a kindred spirit. Despite all the sh*t everyone has been talking about her, Mrs. Lawrence seems pretty with it and cool at this moment. Maybe the best medicine for her illness is…collusion!??!

Luckily for June who, in case you forgot, is going to free all of the children, her commander keeps files on all the children born to handmaids in Gilead conveniently located in his basement.

June gets the documents and immediately turns to her own file, which is kind of like when you look at your own Insta page to try and see how it looks through someone else’s eyes. (We all do this, right??)

June: Have you ever considered leaving Gilead?
Madame Z: You mean go somewhere where I could get mood stabilizers instead of herbal tea?
June: ….yes

Honestly are we even sure that Madame Zaddy is crazy? Or is she just another woman who has fallen victim to that label when really she’s just having normal emotional reactions to the intensity of her surroundings? **exhales large puff of marijuana smoke**

Sadly, MZ explains can’t just leave because her husband is a “war criminal” who “invented the colonies” and is “responsible for unspeakable torture and death.” Don’t ya just hate when that happens?

Anyway, this scene ends with MZ finding a mysterious looking special box and bouncing back upstairs.

Back at their hotel, Fred is clearly jealous that June has found a new commander who is cool and not a rapist. As most insecure people do, he then immediately starts talking sh*t on Lawrence to Winslow, dragging him for not getting any of his handmaids pregnant. As we know, Fred is just projecting here because he knows deep in his soul that he is the one who is shooting blanks and he couldn’t get a handmaid pregnant if he came in her brain. (I told you this was rated NC-17.)

Then Fred and Winslow start speaking cryptically about a way to “ensure virility” in the Lawrence household and Serena Joy is like, “Uh…isn’t that a little extreme?” The last time something like this happened, Fred assaulted June into going into labor, so I think we can all tell immediately that whatever the f*ck this is, it’s not going to be good.

June gets called in from looking up where all her friend’s children are (Janine’s son is dead, btw) by a very freaked-out looking Martha who tells her “they need you in the sitting room.”

It’s immediately clear that things are set up for Ceremony, which makes me realize we haven’t seen a Ceremony at all since last season. Not that I’m complaining.

Fred, Serena, Winslow, and Aunt Lydia all show up and we realize that apparently tonight’s ceremony is also a group date. I’m immediately like, okay so where is this going exactly? Are they gonna watch them do it? Are they gonna put them into bed and then check the sheets like in Shakespearean times? Will Aunt Lydia sub in and give Lawrence a hand job?

Eventually we find out that while they are not going to actually watch the Ceremony go down (good), they are going to have a doctor immediately “examine” June to make sure she has man seed inside her. For religious folk, these Gileadens really are freaks.

For his part, Commander Lawrence is extremely not into what is happening and immediately tries to find a way to get out of it. So was I, as I was watching it. Suddenly I’m over here thinking that maybe he could finish in his own hand and then give it to her somehow and then she would—you know what, I’m not even going to finish this.

Sadly, there is no way out and it is June herself who has to tell Commander and Madame Z that they’re just gonna have to f*ck now. MZ does not love this idea, which again, isn’t really all that crazy and is a pretty appropriate reaction for what is happening around her. She starts screaming and sh*t but then June, who has gone from insane herself to human Prozac in just one episode, calms her down.

They have sex—or whatever you would call what just happened between the two of them—but for the first time ever, Handmaid’s Tale doesn’t make us watch it. Thanks, I guess? As promised, June is “examined” in front of an audience of three people and found to be sufficiently cream-pied (I believe that is the medical term).

TLDR: I think the whole point of this scene is to show Lawrence that the world he cannot protect himself or his wife from the world he has created, and force him to #resist. Also we learn that the punishment for using contraception is being torn apart by dogs.

Cut to: the Waterfords relaxing after a hard day of rape by proxy.

Serena is annoyed at Fred for focusing on his career over their kidnapped baby. She then tells him about her hot American friend in Canada who gave her ciggs that one time, and tells friend they can work with him to get baby Nichole back. F*ck the Waterfords.

Our episode ends with June convincing OfRobert and Janine to help her get all the children out of Gilead. With Commander Z fully flipped, June now has access to a truck. June does not tell Janine that her son is dead, which is probably wise.

Back at the Lawrence residence, Beth the Martha put out feelers for the whole “freeing the children” and the response was…not scones!!! It’s muffins!!! Scones mean no!!! Muffins mean yes!!! June is really going to save the children!!!

This moment of triumph is ruined by June looking to camera and saying, “we’re gonna need a bigger boat,” at which point I threw my laptop across the room. I’ll leave you with this video of comedian Andrew Farmer doing an impression of Ann Dowd (Aunt Lydia) as Ursula the sea witch. Enjoy.