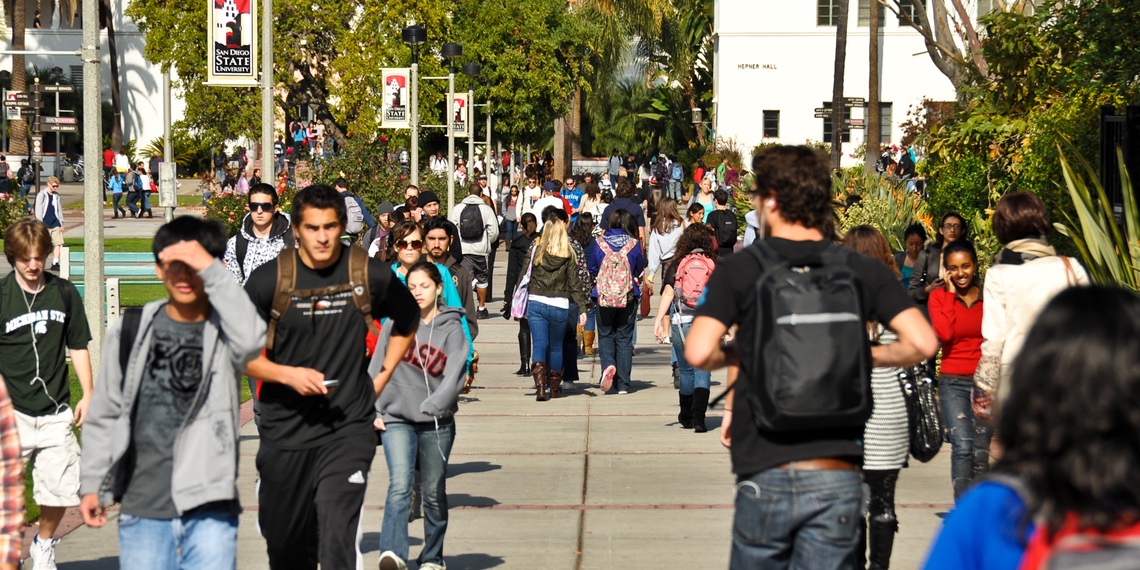 It’s no secret that Greek life (especially frats) has gotten a bad reputation when it comes to hazing, throwing wild parties, and generally dangerous member rituals. While many of these events start off as harmless fun, they can quickly get out of control and become anything but harmless. Just this past year, a number of fraternity events have made national news for their dangerous antics that, in the most extreme cases, have resulted in severe injuries and even death. This week, San Diego State became the latest university to end up in the news for fraternity activity gone wrong.

This weekend, San Diego State University suspended 14 fraternities after freshman Dylan Hernandez died after drinking at a fraternity party. According to the San Diego County medical examiner’s office, 19-year-old Hernandez was found by his roommate without a pulse in his room on Thursday, after reportedly attending a fraternity event on Wednesday night. University officials have not yet released the cause of Hernandez’s hospitalization or death, but they did say there’s evidence the frat may have engaged in “possible misconduct”. Other students reported Hernandez was drinking heavily at the party.

As the result of an investigation that was opened on Friday, San Diego State University president, Adela de la Torre, suspended all 14 affiliated chapters of the Interfraternity Council (IFC). We don’t know which frat Hernandez was partying at, but he was pledging Phi Gamma Delta at the time of his death. The crazy thing is that Phi Gamma Delta had already been placed on probation in 2017 after being “found in violation of regulations pertaining to alcohol at off-campus fraternity events.”

The fraternities’ suspension is, according to the university’s website, “essentially a cease and desist.” The university has stopped recognizing the fraternities, and they are also barred from holding activities (including parties), recruiting, participating in intramural or other university activities, or reserving campus facilities.

This isn’t the first time a fraternity has f*cked up at San Diego State this year, though. According to The New York Times, 10 fraternities affiliated with the council were already facing elevated scrutiny even before Hernandez’s death and the ensuing suspensions. The university imposed penalties on six frats this fall for “a range of reported incidents and alleged policy violations,” which may have affected some fraternity functions. The other four were under investigation. That makes me wonder whether Hernandez’s tragic death could have been prevented if more serious measures were taken on these fraternities “violations” the first time around.

Hernandez’s death comes seven years after that of another San Diego State student. In April 2012, Barzeen Barzanji, the president of the Sigma Alpha Epsilon fraternity, was found dead in another fraternity house, Phi Kappa Theta. His death was ruled an accidental overdose, according to The San Diego Union-Tribune. However, while Phi Kappa Theta was placed on suspension following Barzanji’s death, they were ultimately reinstated after it was determined the frat did not play a direct role in the death.

Despite universities’ efforts to get this behavior of hazing, partying, and dangerous member rituals under control, we’re still seeing an alarming number of frat-related deaths. If you simply Google “student dies fraternity hazing,” you get several different incidents on the first page alone.

I’ve never really gotten the appeal of Greek life, so I’m probably biased, but would we really be at a loss if we just got rid of frats altogether? I, for one, think all of these deaths are enough of a reason to reconsider if the sense of brotherhood is really worth the dangerous drinking culture and hazing practices. Not trying to bash anyone who’s had a good experience with Greek life. But with headlines like “Former LSU student convicted in fraternity hazing death,” “University freshman dead after suspected fraternity hazing,” and “Another fraternity death: UC Santa Cruz student fell out of window after hazing, lawsuit says” making the rounds in the news every few months, something needs to change. And, given that universities are responding by suspending fraternity activity, it seems like they know the frat culture is dangerous, too. We can only hope that they will actually take permanent steps before more students get hurt.

You can donate to the GoFundMe set up in memory of Dylan Hernandez here.

Dana is a full-blown Leo with an unhealthy love of nail polish. She's a self-proclaimed group chat comedian and $7 Costco sangria connoisseur. Follow her @dmicheleeee on all platforms.