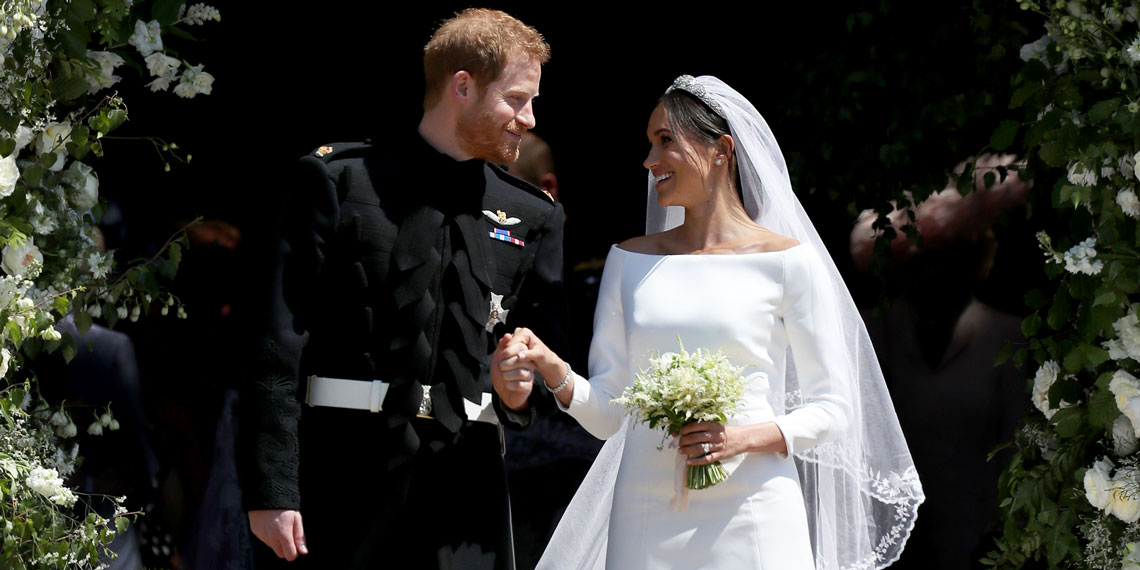 Royal Wedding Recap: I Got Up At 6am For This?

The first person to arrive at the royal wedding was the Queen Oprah. I would’ve thought she’d arrive closer to the ceremony, but I can’t pretend to understand the British royal traditions. Oprah was wearing a lovely blush dress that she supposedly had made overnight when she realized her other outfit photographed too white. Obviously, Kate Middleton did not get that memo.

Actual footage of Kate getting ready for the wedding:

Other guests included British people that Americans care about like David Beckham, Priyanka Chopra, James Corden, Elton John, and Amal Clooney. In an act of sadism, Harry’s exes Chelsy Davey and Cressida Bonas attended the wedding. This feels like cruel and unusual punishment, which is perhaps one of the reasons America fought so hard to free themselves from British rule. *Takes notes for my wedding*

Don’t wanna panic you all but I think Chelsy Davy might object. #RoyalWedding pic.twitter.com/TTeqHMIoCH

First to arrive to the wedding in what looked like a minivan was Hot Ginger Prince and his less hot, yet somehow more important brother, Prince William. They looked like sexy toy soldiers, and it was confusing and forced me to take a good, hard look at my life. Next, Meghan’s mother, Doria—who looked absolutely stunning, like a sweet pear—arrived, followed by the Queen wearing a green screen sewed into a dress. The Queen’s husband, who surely has a name that I don’t feel like Googling because I woke up at 4am for this shit, is 97 and made it to the wedding. What a champ.

Finally, a parade of burgundy Rolls-Royces pulled up and a bunch of young children who looked like angels poured out of them. Behind them was the woman of the hour, Meghan Markle. The children were all her bridal party, which seems like an insane power move on Meghan’s part. No one can upstage you when they can’t fully form words and who need help using the bathroom from their parents. I see you, Meghan.

When Meghan exited the car, there was a palatable silence, followed by two, like, third grade boys helping unravel the tulle veil she was trapped in. Odd choice to have two small boys only adept in armpit farts to help you with your bustle, but again, I do not claim to understand this culture. I am only here for the Bellinis and the diamonds.

This is a good time to go into a few wedding details. The guest list topped out at around 3,300 people, which included the 600 people in the chapel and the 2,600 commoners allowed to stand on the grass and scream Meghan and Harry’s name. The cake was made by Claire Ptak and was lemon and elderberry cake. The dress was Givenchy, which every news anchor had to pronounce in a bizarre fake British accent approximately 19 times per protocol, and Meghan wore a convertible tiara. What’s that exactly? A tiara where you can switch out the diamond brooch with a new diamond brooch whenever you feel like it. That seems unnecessary given that Meghan could probably afford a different diamond tiara to wear every hour of the wedding, but I guess I appreciate the attempt to relate to us peasants.

Okay, so after waiting for approximately 14 lifetimes, during which time I have aged 87 years, had a child, and retired from my job, Meghan finally enters the chapel on her own because her father accidentally scheduled heart surgery the day of the wedding. It’s cool though, she looks gorgeous and stunning. When Harry sees her he cries. Doria cries. I cry. Diana’s ghost cries. The Queen, per protocol, does not cry.

Meghan gets to the front of the chapel and Harry mouths to her that she is beautiful and he is lucky. In this moment I am very horny for love and, of course, diamonds. You can almost hear the sound of women all over the world asking their significant others why they never look at them the way Harry looks at Meghan. A boring British man in regal robes repeats in various forms that God Is Love and Love is God and British people sit down and stand up throughout the speech. This is all pre-fodder for the main event, which is Bishop Michael Curry, who breathes life into the old musty walls of St. George’s Chapel with his sermon “The Power of Love.”

It’s literally the most moving sermon I’ve ever heard, and the only thing more stunning than hearing him preach the power of love is watching these old Brits have literally no clue what to do with someone showing this much emotion. During this time, I’ve decided that I have recommitted myself to the Lord and am moving to wherever this man resides to hear him speak every Sunday.

Also breathing life into the antiquated, though very beautiful, church is The Kingdom Choir. They sing “Stand By Me” and if you didn’t cry you have to rescind your  human card and out yourself as an alien. That being said, the Queen did not cry.

The boring British priest returns and pronounces them husband and wife but calls them Henry and Rachel which is jarring because that is not what I call them! But that is what God calls them, I guess, so they have to use those names in church. Still, for a moment there it was all very reminiscent of Ross and Emily’s wedding. Anyway, Meghan and Harry or Rachel and Henry then exit the chapel and everyone is very happy and when they walk outside they are finally allowed to kiss publicly, for what I imagine must be the first time in their relationship.

Then, like all princesses eventually do, Meghan steps into her horse drawn carriage with the hottest most ginger prince to ever exist and they trot around Windsor Palace until the two of them turn back into a field mice sitting in a large pumpkin. It was the happiest day of my life. I wish those two beautiful field mice a lifetime of happiness. Also let me know if you are ever putting that convertible tiara on Poshmark.