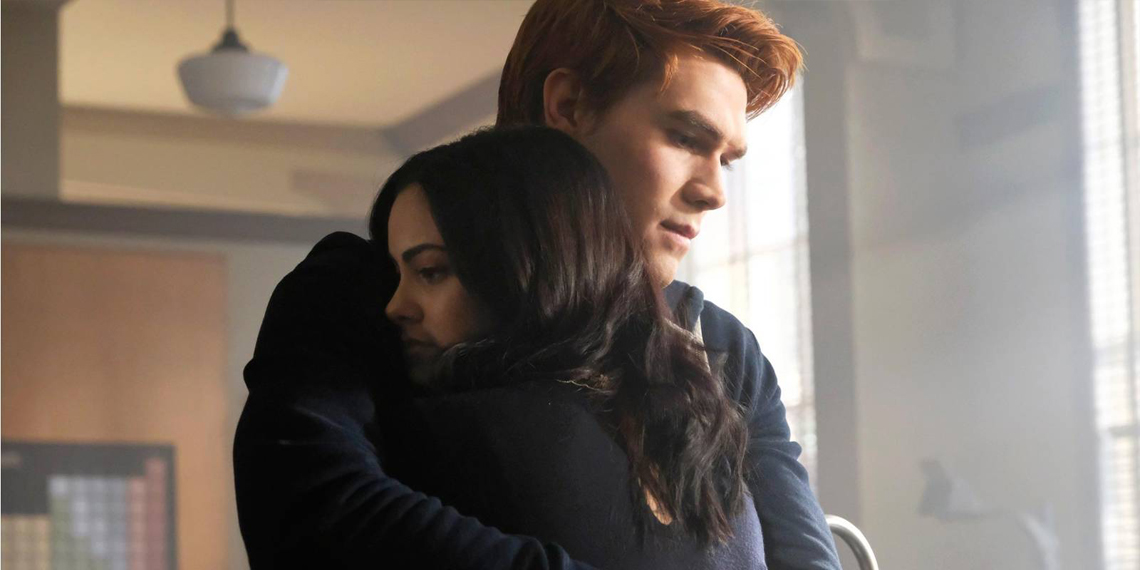 I don’t know about y’all, but I’m so fucking ready for this week’s episode of Riverdale and that’s not just because I spent the last seven days rewatching YouTube clips of Jughead whispering “stay” to Betty over and over again. Nope. Has nothing to do with that. I am excited because the promo trailer for this episode included 2.5 seconds of footage with Cheryl in it, which means I might actually be entertained. On that note, shall we commence with the recapping?

Okay, why does Betty always want to be knee deep in a crime scene? Can someone from the writer’s room please enlighten me on this? Girl, you are sixteen! Please just go upstairs and write in your diary about losing your virginity like a normal person!!

Archie acts like his normal fucking self and doesn’t tell the FBI shit about Hiram placing a hit on that mob goon who owned the Canadian hot dog stand. He’s like “who is Papa Poutine?? I don’t know her.” And the FBI agent looks like he would rather shoot himself in the foot than deal with Archie for one more fucking second.

JUGHEAD: I love you, Betty.

BETTY: Not now, I have to help my mom hide a body, god!

Wait, did Hal hire Mrs. Blossom for her sexual services? After he walked out on his family for supporting a prostitute? Wowww. The hypocrisy of a middle-aged white dude’s moral code knows no bounds.

Meanwhile, the Lodges are wondering wtf to do about the decapitated statue head someone delivered to their penthouse suite. Hiram starts throwing out solutions based off of actual life experience, while Veronica throws out some helpful advice from her extensive experience as a high school bitch.

VERONICA: Well at my private school that’s not how we handled peaceful politics. May I chime in here with some ideas?

This is your doing, buddy!

Betty is bugging the fuck out and acting like this isn’t the first time she’s spent some quality time in an active crime scene. Girl is a freak for murder so she’s not fooling anyone.

Jughead is like “why did you hang up on me last night? Was it not enjoyable for you?” which is the first time I’ve ever heard a man voice concern over a woman’s sexual satisfaction, like, ever. Betty brushes off his concerns by saying she just got caught up in “normal, regular Cooper drama!” and she’s not wrong. It is pretty normal for that family to reenact an entire season of How To Get Away With Murder on a Tuesday night.

I love that Jughead, a high school junior, is extorting the mayor of an entire fucking town. Like, what power to you really have here, kid? And the mayor seems genuinely terrified that Jughead might actually sell her dirty laundry to his high school newspaper. I mean, how large of a reach does the Black & Gold have? Because my high school newspaper’s largest reach was to the school parking lot, where it was immediately trashed before students exited the premises.

Jesus Christ. BETTY, STOP PLAYING WITH THE DEAD BODY! I shouldn’t have to say that more than once an episode.

Sidenote: I love that The CW gives us a beautiful moment between Betty and Jughead—one that viewers have been waiting on for two VERY long seasons—only to have it be put on the back burner for another 2-5 episodes because Betty stumbled her way into another murder investigation. I have seen Archie and Veronica bang on literally every surface of the Riverdale set and I only get to see five seconds of Bughead sex scene before it’s tainted with murder? That is bullshit. #JusticeForBughead

Betty confronts Chic about “the shady guy” which is literally how I refer to the weird guy who lives in my building and likes to spend his Saturdays watching other people do laundry in the laundry room, but okay. She accuses him of trying to buy drugs from The Shady Guy aka the guy who ended up dead in their living room. The scene then devolves into Betty and Alice just screaming at each other about how to properly handle a dead body in your living room while Chic creepily smiles in the background. This kid definitely planned that whole fucking murder, I’m calling it now.

Elsewhere, Hiram sits down with FP and Jughead to discuss a peace agreement. He doesn’t want Jughead to expose his fucked up business ventures and in exchange Jughead won’t   publish his school newspaper article. K.

Jughead calls Hiram out on his bullshit, and it’s funny how the kid who just got night driving privileges on his permit is calling the shots in this room, isn’t it?

Oh fucking FINALLY we get to see a scene with Cheryl Blossom in it. Anddd she slut shames her mother in it. God, this girl never disappoints.

CHERYL: Have you no scruples, mother? You’re destroying families with your crimson waves!

I’m saving this line for the next time my one friend flirts with a married guy for “free drinks” and then ends up wanting to go home with him.

HAHA the FBI guy just told on Archie to his dad for not being helpful with the Lodge investigation. What a bold strategy the FBI has there. It’s one that has been personally tested and proven by my 10-year-old self as tactical advantage to use when blackmailing a younger sibling for spilling a juice box on the rug.

Betty tells Jughead that she buried another body and Jughead is like “well it is a day that ends in Y, so.” Wait, did he say that The Shady Guy’s car was his? Like, just because you took her virginity doesn’t mean you have to sign up to be her accomplice in murder, Jughead! God this town is full of fucking morons.

JUGHEAD: How fast can you hotwire a car?

So is murder the new foreplay and I just wasn’t aware of it, or…?

Hiram and Hermione want to expose Mayor McCoy’s affair with the sheriff, which I legit forgot about until this moment. Veronica decides to handle the situation on her own by still blackmailing the Mayor but, like, in a nicer way. Whatever you have to tell yourself to sleep at night, sweetie.

So Archie is just going to tell Hiram about the FBI agent?? This is, like, Snitching 101 on what not to do.

ARCHIE: *tries to be a double agent, proves he is a complete dipshit instead*

ME: *knows nothing about working with FBI agents or mob bosses*

Betty and Alice ask FP for advice on how to correctly murder someone and get away with it. Except, you know, that didn’t work out so well for FP since he just spent the last year in jail for only moving Jason’s body, but whatever.

Also, I’m all for this plan if it means FP and Alice bang. I don’t even care that it’s kind of incestuous at this point, what with their kids dating each other and everything, because the tension on my screen rn is so hot it could burn the town of Riverdale to the ground.

Oh, Archie is a dead fucking man. Hiram’s driver picks him up and is like “we’re taking the scenic route today” but he might as well have said “it’s time to sleep with the fishes, boy.”

Meanwhile, Chic continues to act creepy AF. He has free reign of the Coopers’ house and all of their family photo albums and he’s cutting people out of their lives left and right.

ME: Chic, you can’t just cut people out of your lives like that!

Wait WHAT the FBI agent wasn’t even a real agent?? He was just some sort of mind game the Lodges used to fuck with Archie’s head?! *slow claps* Wowww. The manipulation here is outstanding and I applaud this level of trapping.

Also, I’m watching the promo trailer for the next episode and it looks fucking insane. But also we have to wait until March 7th because The CW are psychopaths who like to hold my emotions hostage. Until then I’ll just be here adding more bullshit to The CW’s entry in my personal burn book. BYE!