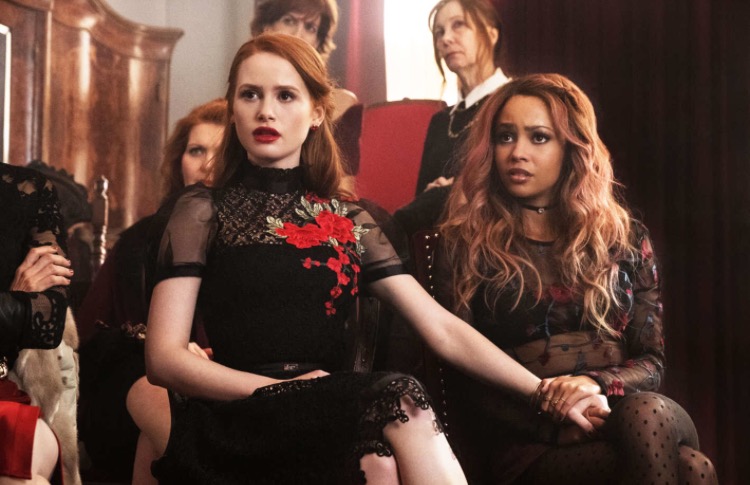 ‘Riverdale’ Recap: How Many Sets Of Twins Are In This Godforsaken Town?

Yeah, yeah, yeah so last week I forgot to do a Riverdale recap. So sue me. My internet barely works on a clear, cloudless day and if you think it was working during last week’s bomb cyclone then you’re mistaken. That said, to my loyal readers, here’s some highlights from last week’s episode: Veronica humble bragged about her fucking mountain chateau for the entirety of the episode. Veronica also made out with Jughead and then Dark Betty punished him for that in the bedroom. Moose put out some feelers for a threesome with Midge and Kevin (I paraphrase). Josie tried to break up her mom and Sheriff Keller. Anddd the dipshits in the mountain chateau almost got robbed by townies. Oh, also, Cheryl is a lesbian. Don’t you feel like you’ve aged 12 years just reading that description? You do? Good, that about covers it then. Shall we move on to this week’s Riverdale recap?

The episode opens with Jughead acting like Hiram Lodge’s plans for Riverdale are diabolical and not just good business. Jughead, I’ve said this once, I’ll say it again: you’ve got to stop watching Netflix documentaries before bed. It’s getting to your head!

LOL Betty wants Kevin to catfish her brother for her because it’s the “only way” to find out what’s going on with him. Or you could just, like, talk to him, you fucking psycho. Also, poor, poor Kevin. The boy is just trying to live his life for five fucking seconds without one of his batshit friends suggesting he video chat a gigolo. Using his high school’s wifi! Because that can’t be traced back to him at all.

Hiram asks Archie’s dad to run for mayor and it’s suspicious AF. If you’ll recall, the Lodges outed Josie’s mom aka the former mayor of Riverdale for her extramarital affair with the Sheriff when she refused to do their bidding. What was not outed was the state of Sheriff Keller’s abs.

The townspeople should know these things!!

The weirdest part about this whole thing is that Fred actually seems into the idea? Why he trusts his ex-girlfriend’s husband is beyond me. Like, you banged this man’s wife while he was in prison. He’s 100 percent got some sort of revenge fantasy he wants to play out here.

Meanwhile, at the Cooper residence, Hal casually asks Alice for a divorce in the middle of breakfast IN FRONT OF THE CHILDREN. And it’s like, Hal, if you didn’t think Betty had daddy issues before with her whole Dark Betty webcam thing, then she certainly does now.

HAL: Alice, I worshipped you for 20 years!

Alice, you are a hero.

Archie really doesn’t want his dad to be employed so he decides to narc on Hiram to Jughead, who is apparently the most authoritative force in this godforsaken town and the only person with enough influence (??) to put a stop to deep-seated corruption. K.

Also, Archie, you withstood an FBI investigation, a henchmen murder, and every single one of Veronica’s mood swings, but this is your breaking point? Your dad getting a job? Really? Jughead, being the messy bitch that he is, is living for this drama. He’s like “Mr. Lodge is just like Dracula and Riverdale is doomed!!” Honestly, Jughead, you’re exhausting sometimes.

OMFG. Polly. Is. Back. And she brought Forrest and Fern! Or whatever the fuck she named her kids. It was definitely something weird like that though, right? Idk what’s going to be more upsetting for these kids when they grow up: their names or their bloodline.

Hmmm. The babies are actually… kind of… cute, and not even the least bit deformed. Interesting.

The entire fucking town shows up to the reading of Clifford Blossom’s will. The only place my entire town gathers is the McDonald’s on Live Music Night, but okay. HAHA. Mrs. Blossom gets Thornhill Mansion, which Cheryl gleefully points out is only the charred remains of its former glorious self.

Just when we’re getting to the good stuff, Alice storms in to ruin the reading. Tbh I inspire to be this extra during my breakups.

ALICE: I will be taking half of whatever fortune this inbreed cesspool of a family has a amassed over the years.

So half the money will go to Betty and Polly and the other half will go to Cheryl? I’m okay with this new development.

WHAT. CLIFFORD BLOSSOM LIVES?? Jk, false alarm. It’s just Clifford’s identical twin brother Claudius, because apparently the only way to fill a plot hole in Hollywood is to write in a long-lost twin sibling. *cough* Marlene King *cough cough* Also, the Blossoms now have a twin in every generation? How is that even biologically possible? Like, how many goddamn twins run in this family?

Chic doesn’t want to do the blood test to confirm he’s a Blossom and get his share of the riches, which all but confirms that he’s not Alice’s prom baby. This, of course, gets Betty fucking hype for her catfish plan. She’s, like, stage-momming Kevin as he tries to seduce HER BROTHER over video chat.

^^Actual footage of Betty coaching Kevin through this conversation rn

Elsewhere, Jughead tries to foil Hiram’s plan by reaching out to a mysterious caller (aka Smithers!) who apparently knows all of Hiram’s dirty laundry. Is Jughead not even the least bit concerned that all of these strangers just have his personal cell phone number lying around? Like, the only people who have my phone number and actually use it are my mother and the Seamless guy to tell me he doesn’t want to get off his bike and can I please come down to get my food.

Veronica shows up to Archie’s place to bitch him out for spilling her family secrets to Jughead. She’s like “snitches get stitches, Archikins!” (I paraphrase) while Archie just stands there, acting like he just learned the English language, like, yesterday.

Archie is finally starting to ask the hard questions about the Lodge’s ultimate plan. Shirtless. Honestly, I applaud him for playing to his strengths.

Lol I love that Polly thinks Chic is weird AF. Like, girlfriend, you slept with your cousin and now live on a commune farm with your incest offspring. I think I’ll be the one to judge who’s weird and who’s not weird on this show. Thx.

ME: Okay, I see your point.

Okay, Jughead’s “story” on the Lodge’s plans for Riverdale is literally longer than my college senior thesis. Betty is just like “it’s the best thing you’ve ever written even though it definitely exceeds the 2,000 word guidelines most reputable papers use. The Blue & Gold has to publish it!!”

THE BLUE AND GOLD: Yeahhh we’re not publishing that.

Fred is out of the mayoral race and Hermione is in. Fred doesn’t support Hiram’s plans for Riverdale, which is to pave paradise and put up a  MOTHER EFFING PRISON. Hiram is just like “but everyone loves a good prison! It’ll drive up business! You’ll see!” Yes, because that’s exactly what I told my last broker—please, can you find me an apartment near the new prison?

Sooo Chic is 100% not the prom baby. Betty got a DNA test to prove it.  I’m still not entirely unconvinced that DNA test wasn’t done by herself in her high school chemistry lab, but whatever.

The episode ends with Hiram acting creepy AF. What’s with the knife? Is Archie officially a lackey now? His parents must be v v proud.

Anddd on that note, I’m out! Catch ya next week.