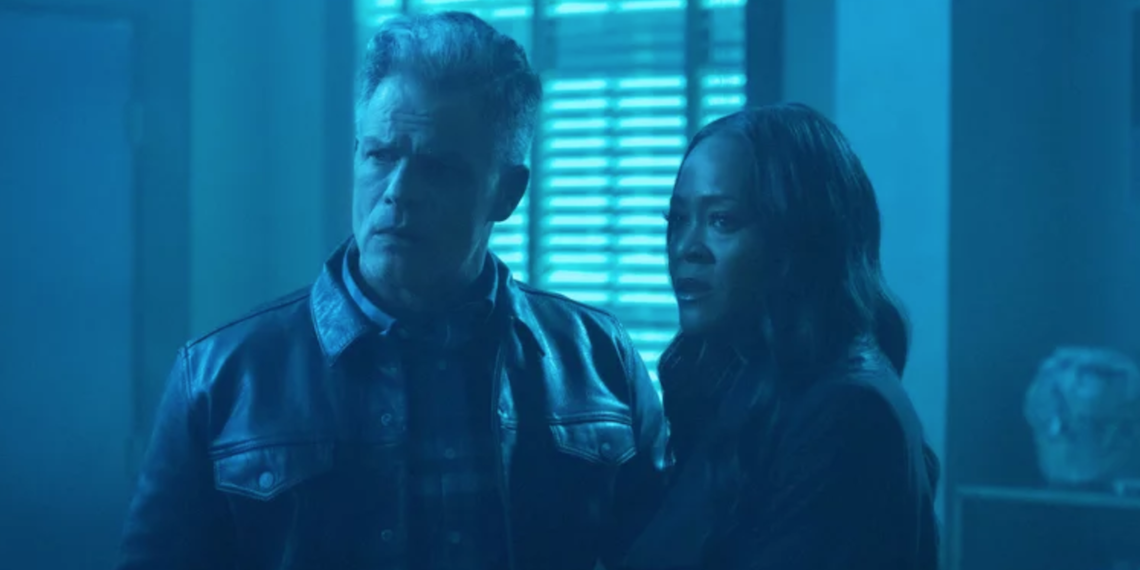 Welcome back, Riverdale fam! I’m sure you’ve been on the edge of your seat since last week’s episode when we learned that Veronica thought “film noir” meant “hats, but make it fashion.” Other things that happened last week that were just as upsetting as Veronica’s choice in accessories: Archie is single, stupid, and without a legitimate excuse to take off his shirt each episode. I’m v worried about his emotional well-being. Betty was still rekindling her relationship with her father despite the fact that he murdered all of her friends, and Veronica set fire to Hiram’s entire drug stash before Hermione could profit from it. I applaud that level of pettiness. And if you think that sounds like hot garbage masked as quality television, that’s because it absolutely is.

Jughead starts this week off by declaring that Riverdale is “Bizarro Town” and that point is driven home by the fact that the writers decided to give secondary characters a minute of screen time without Archie, Jughead, Betty, or Veronica f*cking it up with their personal problems. It’s announced that the former Sheriff Keller and the former Mayor McCoy are getting married and I’m here for it. In fact, please show more of it. Anything to see those abs.

Cut to Cheryl and TT who are fondling each other in bed. Really? Red satin sheets? Like, we get it. They’re living in sin. Lesbianism isn’t that shocking anymore, CW!!

In love with next week’s episode of #Riverdale like these two crimson turtledoves.?❤️?????‍❤️‍?

Cheryl says that she feels sooooo blessed to finally be sleeping in a bed and not in the tent city anymore. TT’s like “yeah we’re away from the cold and the maggots.” THE COLD AND THE MAGGOTS. I’m sorry, WHAT. I mean, I knew the Serpents’ tent city should be condemned, but this is outrageous. Also, do we think the writers got their inspiration from all the Fyre Festival footage and were like, “imagine where those rich kids thought they were going to a music festival, but make it where Riverdale’s discarded youth will live indefinitely.”

Meanwhile, Veronica finds out that you can’t just burn your mother’s drugs and get away with it. Funny. I thought the first time she’d learn there are consequences to her actions would be, like, literally any other way, but sure, have her first life lesson involve broken kneecaps.

Okay, yes I am LIVING for more Kevin/Moose content. Or really any content that involves more of Kevin’s one-liners.

I will say that it’s weird that all of a sudden the writers are pretending like these secondary characters are actually important. First Kevin and Moose and now Josie and Sweet Pea?? First of all, I forgot those two were even a thing. I’m pretty sure we saw one closed-mouth kiss from them, like, episode one and then it was promptly forgotten about. I wonder whose ego they had to fondle in the writer’s room to get a little screen time.

Speaking of random acts of kindness, The CW must think I’ve been a good girl this season because TOMMY HOTTIE IS BACK Y’ALL. Tommy Keller and Mayor McCoy are getting it on in a hotel room and I can’t even focus on the fact that they’re trying to shove more Gargoyle King madness down my throat because did you see those abs? I. Can’t. F*cking. Breathe.

Mayor McCoy finds a sealed letter from the Gargoyle King asking them to finish ascension night with the rest of the parents. Is it just me, or is the Gargoyle King acting VERY petty rn? Like, he didn’t get invited to the wedding, so now he’s blackmailing the happy couple to force them to hang out with him? That’s inspired and I am definitely going to incorporate that into my wedding season strategy this year.

Cheryl takes a break from being fabulous to fat shame Kevin out of eating carbs and bond with him over his relationship woes, because I guess now that she’s a lesbian she suddenly grew a heart? Like, has Cheryl said anything nice to Kevin ever? I don’t know where this sympathetic attitude is coming from, and I don’t like it.

Kevin tells Cheryl about how Moose is afraid to come out and Cheryl is just like “you should move on.” Which is such a standard condescending piece of advice that someone in a relationship would give.

KEVIN: I can’t go back to picking up guys in the woods.
CHERYL: Uh, no. Have you heard of dating apps?

THANK YOU CHERYL. Like, please explain to him that he doesn’t have to prostitute himself out in the woods. This is the 21st century, for god’s sake.

Okay, WHAT. Did Cheryl just out Moose over the loudspeaker in between announcing the lunch menu and dates for the upcoming pep rally?? That is so wrong, I can’t.

Archie finds Josie in the music room crying over her upcoming audition to Juilliard, and the whole thing just feels forced. I don’t like that they’re shoving this Archie/Josie relationship down our throats just because Josie is the only single girl left in Riverdale and Archie is contractually obligated to get his dick wet at least once an episode.

Elsewhere, Veronica is trying to figure out where she’s going to get the money to pay off her mother’s drug buyers. I guess half priced mocktails at her speakeasy’s ladies night isn’t going to cut it.

I’m sorry, but did Reggie just seriously suggest they rob his daddy’s dealership for the extra cash?? I’ve had pizza in my fridge for longer than they’ve been together and he’s already willing to rip off his flesh and blood for her? Damn. That’s devotion.

No, it’s robbery. And it’s a felony in most states, you dipsh*ts! It’s certainly not going to be as easy as grabbing the money while your dad is at work. I swear to god, if Veronica’s solution to getting away with this heist is to go shopping for new wigs then I’m out, y’all. I. Am. Out.

Sidenote: why did this entire robbery conversation feel like foreplay? Can just one of these teenagers have normal sexual habits, please?

Meanwhile, the midnight club is newly reunited, and they’re banding together to finish the G&G game they started back in high school. Is it just me or have we seen this episode before, and it was called Jumanji?

Oh, what do you know? I guess armed robbery wasn’t as easy as  Veronica and Reggie thought it would be. Imagine! Veronica shows up dressed for the robbery like she finally put her Thelma and Louise Pinterest board to good use. I f*cking can’t with her extraness lately. She is out of control.

Lolololol. Reggie gets shot and their money bag explodes with a dye pack, which is exactly the outcome these two morons deserve. Like, if they had done exactly one Google search in preparation for this heist, they might have foreseen some of these obstacles.

Speaking of morons, Archie escorts Josie to her audition because I guess The CW is trying going make this happen whether we want it to or not. Why else would he suddenly be besties with Josie if not to get laid in the very near future?

Josie starts having a meltdown at Pop’s because she didn’t get into Juilliard. She’s crying about how nobody loves her and she has no plans and her life is falling apart and it’s very similar to what I do every single day in my car three seconds after pulling out of my office’s parking lot.

JOSIE: *wails* But I killed that interview!!

NO NO NO NO NO. You can’t just pair people up together because there’s literally no one else! This isn’t Noah’s freaking Ark!

Moose tells Kevin that he came out and he wants to celebrate by “doing it,” because that sounds like a person who’s emotionally ready to lose their virginity.

OMG WHAT. Gladys is the drug buyer Hermione is so afraid of that she would literally sacrifice her first born child to them. I’m shocked, because the only thing I find scary about her is her crow’s feet.

^^Something I say at 8pm every Wednesday night

Okay, she’s being surprisingly nice for a drug dealer. She’s going to take their tainted money even though she 100 percent can’t use it, and all she wants in return is Reggie’s car. Veronica, being Veronica, immediately acts ungrateful. She’s like, “but he loves that car!!” and, like, it’s either his ride or his kneecaps, you choose bitch.

Meanwhile, the Midnight Club is back and ready to play with poison. They figure out pretty quickly that this gathering was just an elaborate ploy for the Gargoyle King to get to their kids while they’re unsupervised. Lol. As if these kids have ever been supervised a day in their goddamn lives.

Kevin is the only one unaccounted for, and because we can’t have nice things, his first time is ruined by the Gargoyle King and his gang. Y’all, I’m so upset. Archie and Veronica get to bang on every goddamn surface in Riverdale but Kevin can’t have one night?? #JusticeForKevin

On this week’s #Riverdale, promises will be kept and hearts will be broken… And a sacrifice will be demanded…?????⌛️☠️??

We find out that the Gargoyle King is actually Moose’s dad, Major Mason, which I could have called from a mile away. This is the only reason why the Riverdale writers gave any of these characters the time of day this episode, and it’s pissing me off.

Apparently Major Mason was jealous that Moose was seeing his former high school crush’s son. So, let me get this straight. Moose’s dad and Kevin’s dad were best friends and Moose’s dad tried to kiss Kevin’s dad back in the day. Why is this show so goddamn incestuous?? It’s like history repeating itself except they’ve all slept with each other in some way, shape, or form.

FP: You can’t just kidnap and terrorize your kid!
MAJOR MASON: This is Riverdale, what’s your point?

Gladys and Jelly Bean show up at FP and Jughead’s trailer and they’re moving in. They want to be a part of their lives now and I’m sure this has absolutely nothing to do with the drug sale that went down earlier in the episode…

Oh GOD. Archie is back to singing and I don’t know what I did to deserve this. He’s like “yeah and the worst part about Kevin and Moose being kidnapped and almost gay bashed is that I couldn’t sing with you!” You gotta have your priorities straight, don’t ya, Arch?

Moose leaves town to deal with everything, and breaks up with Kevin in the process. He’s back to being the only gay person in Riverdale. I’m sure his next lover will turn out to be a homicidal murderer, because The CW doesn’t want Kevin to find love. Again, I say #JUSTICEFORKEVIN.

Meanwhile, Cheryl gets TT her own gang and even an early admission to college! Literally the only thing a boyfriend ever gave me was a handwritten note that said “we need more milk”, but okay. Their gang name is the Pretty Poisons because they’re “pretty by day and poison by night” and I am absolutely adding that line to my dating app bio.

And on that note, I’m out Betches! If you need me I’ll be taking to my Instagram DMs to fight @writerras about justice for Kevin. Toodles!