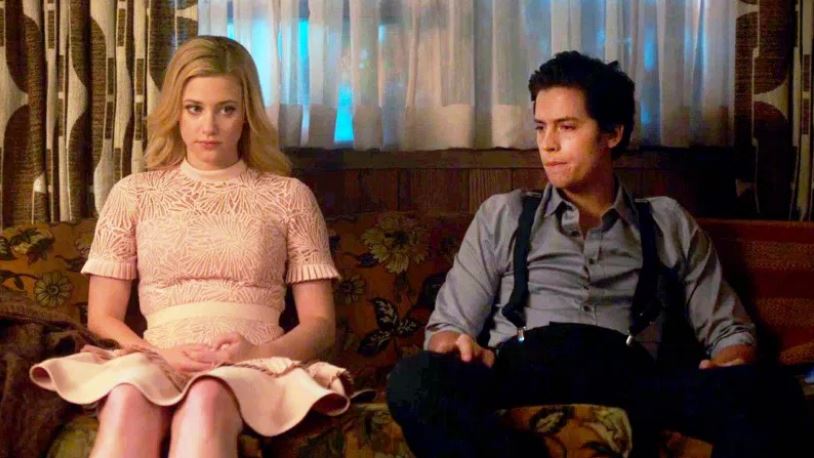 ‘Riverdale’ Recap: Betty And Jughead Finally Do It

It’s Wednesday and Riverdale is back and better than last week’s episode, because that shit was boring AF. I’m not sure what I’m more excited for going into this episode: the prospect of seeing Dark Betty fuck some shit up or The CW’s strong attempt at turning Riverdale into The Sopranos. Should be lit. Anyway, shall move on to the shit-talking?

The episode opens with Archie acting like Mr. Lodge’s personal bitch. Oh, how the mighty have fallen. One second you’re the leader of a shirtless high school vigilante club and the next second you’re picking up Hiram Lodge’s bran muffins, amiright, Archie?

So the sheriff thinks The Serpents are behind the statue beheading and it’s like, don’t you have better things to do with your time, Sheriff? This is literally a sub-par high school prank, not a matter of national security. Tbh the only true crime taking place here is that I haven’t seen Sheriff Keller’s abs in at least three episodes.

Betty finally confronts Jughead about his relationship with Toni. I love how teenagers on high school soap operas just come right out and ask shit. I mean, I have a tried-and-true method for getting shit out of my boyfriends, and it involves hacking into their phones, tracking their every waking move, and laying psychological traps all over their lives and everything they love to get to the bottom of my questions. But, ya know, to each their own.

JUGHEAD: Toni did spend the night once but she only gave me a tattoo!

Jughead asks if Betty has “done anything” with anyone else and she’s just like “of course not! .”

The FBI guy is back and I’m still not entirely convinced this guy is who he says he is. Like, if he’s an FBI agent with any sort of training he wouldn’t be relying on a 16-year-old whose greatest accomplishment in life is being former captain of the football team. Anyways, he wants Archie to spy on Veronica’s confirmation, which should be interesting because Archie has not a subtle bone in his body.

Sheriff Keller goes back for round two with Jughead and says he’s evicting the entire trailer park aka every Serpent from their homes in 14 days. Wait, wait, wait can they just evict people over a town prank?? What are the rules of this town?

Lol Hiram asks Archie to come to his poker game but as a literal servant. Honestly, I applaud his pettiness. Also I love that most of Hiram’s manipulation tactics can be taken right out of Regina George’s handbook.

Betty comes home and finds a strange guy in her house. She’s acting all shocked and skeeved out but with the path you’re on, sweetie, you better get used to this. Chic says it was for a job interview but, like, he’s in a robe? Yeah, seems legit.

Tall Boy and Jughead get into it at the clubhouse, and I guess we’re just going to pretend that Tall Boy is an acceptable nickname for a tall human being and not something I used to pound five seconds after walking into a frat party. K.

Betty and Jughead are back at it, and by “back at it” I mean amateur sleuthing AND NOT feeling each other up in Jughead’s abandoned trailer. I guess Betty only reserves that for her “clients” these days.

^^ Actual footage of Jughead and Betty after leaving Pop’s Diner

OH SHIT. Penny Peabody is back and she is about to fuck some shit up. She’ll help The Serpents avoid eviction, but only if Jughead gets kicked out of the gang and she wants to carve up his arm with a rusty spoon. Casual. Jughead is just like “I have a plan too!” as he holds the homemade wanted posters of the missing statue head he hand drew in fourth period art class. And he wonders why people don’t trust him with the future of their homes and livelihoods.

The FBI guy keeps trying to get Archie to wear a wire to Hiram’s poker party and Archie is just like “nah.”  For once Archie’s thinking with the head that matters. Let’s see how long this lasts.

Okay, let’s talk about the mob meeting disguised as a poker game for a minute. First of all, I doubt any mob fights happened over “cheese curds”. At least make it realistic and have it be cannolis. Second of all, Pop’s is not really that secret of a meeting place for a group of mobsters. It’s literally the #1 hangout spot in this town. Third of all, I can name at least one more high stakes poker game than this bullshit I’m watching on my screen rn:

Also, let’s just remember that that the FBI referred to these guys as “kingpins” and this one dude literally owns a hot dog stand in Quebec.

Wow this communion is so extra. From what I remember of my best friend from middle school’s communion there was not actually a concert held mid-communion where her and her friends sang songs from a movie about step siblings banging each other. But, you know, I could be remembering wrong.

The priest asks Veronica if she wants to denounce all evil and she looks like she’s really struggling with this answer. Which, like, same girl. He shouldn’t put you on the spot like that!

Jughead and Betty solve the mystery of the missing statue head! I guess I can rest easy knowing that Riverdale is safe from the likes of vicious pranksters. Jughead asks the guy who found the head if the guy he saw dump it was “tall”. As if that literally proves anything.

Jughead brings the head to that dive bar The Serpents call a clubhouse. He reveals Tall Boy’s scheme to get power over the club. He’s clearly got all the damning evidence he needs because Tall Boy is, in fact, tall.

TALL BOY: And I would have gotten away with it too if it weren’t for you meddling kids!!

Jughead keeps yelling about how they need to strip Tall Boy and exile him. Lol exile him where? This is New York state.

OH MY FUCKING GOD. BETTY AND JUGHEAD ARE GOING TO DO IT. It’s happening. Right here, right now, people. Finally some sex that no one paid for. I’ve been waiting for this moment since season one and somehow I didn’t think it would be tainted by Betty’s webcam extracurriculars but I guess I’ll take what I can fucking get.

Meanwhile, Alice Cooper is bitching about Betty missing dinner. Ah, if only she knew what her daughter actually does with her free time.

ALICE: This is so typical of your sister. She gets caught up in something—murder, Jughead’s penis—and can’t make it home for dinner!

The Cooper dinner is interrupted by some creepy-ass guy at the door. This is the same family who regularly corresponds with serial killers, so I doubt this is anything out of the ordinary for them.

Elsewhere, someone sends the Lodges the statue head as a communion present for Veronica, and Archie outright lies to the FBI about Hiram placing a hit on his mob buddies.

Betty gets home after losing her v-card in a trailer and I don’t even get one fucking second to bask in this moment that I’ve been waiting on for since season one because she discovers Alice scrubbing up blood on the living room floor. Casual. The creepy guy is dead AF and Alice is just like “Elizabeth, did you lock the door?” God, I love this town.

Now, if you need me, I’ll just be sobbing while I replay the 30 seconds of Bughead that graced our screen this evening. BYE.