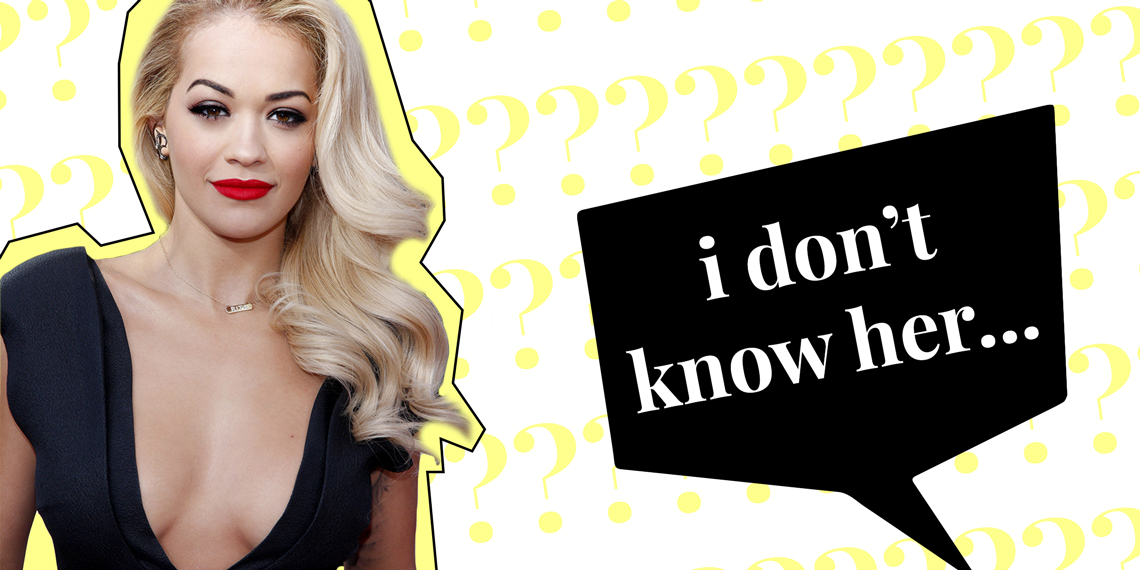 Who Is Rita Ora And Why Is She Famous?

Not all celebrities are created equal. While I love accomplished actors and singers, I prefer famous people with a little more confusing resumes. Case in point: Rita Ora. While you’ve probably heard of her, you also probably have no idea why. Why was she at the Met Gala? Why does every tabloid cover everything she does? Even if you could name one thing she’s done, you’re most likely still blissfully unaware of how much of a clusterfuck her career has been. Luckily, I’ve done way too much research and am prepared to talk about Queen Rita’s myriad accomplishments so none of you have to waste the energy typing her name into Google and figuring out the timeline of her career yourselves.

Here’s some background on Rita Ora. She was born in 1990 in Yugoslavia, but her family moved to the UK a year later because of major political turmoil and ethnic persecution. I’m not going to explain the entire Yugoslavia situation (you have Wikipedia, use it), but it was bad. Fast forward, when Rita became one of the first artists signed to Jay-Z’s record label and started making YouTube videos. She started getting big in the UK after she was featured in this EDM song “Hot Right Now,” which you have absolutely never heard if you live in the US. Early Rita Ora is very 2010, kind of like Rihanna’s “We Found Love” phase, but obviously not as good.

For some reason, I first became aware of Rita in 2012, when she released her debut album. It was really only big in the UK, but there’s a slim chance you might have heard the songs “R.I.P.” or “How We Do (Party).” No? That’s okay too, none of this matters. She started making announcements about her second album in 2013, but there’s still no word on when this album is coming. I’m not like, a music industry insider, but I feel like it can’t be a good thing when your album has been “coming soon” for a full five years. In terms of music, you most likely know her from being featured on Iggy Azalea’s song “Black Widow” back in 2014. Classic stuff. She’s actually released a few new songs in the past few months, and they’re not bad. I particularly like “Anywhere,” and this makes me think that there might be an actual album that exists.

In the half a decade that her second album has been allegedly in the works, Rita has stayed busy with a wide variety of projects. She’s been a judge/coach on the UK versions of both The Voice and The X Factor, which really says a lot. Going on one singing competition show is one thing, but judging two is a pretty good indicator that your music career isn’t exactly breaking records. Like, there’s a reason you don’t see Drake judging the new American Idol.

Rita has also done some work as an ~actress~, and by that I mean she was in Fifty Shades of Grey. She played Christian’s sister in all three movies (they look nothing alike), and in the third one she even got a juicy kidnapping subplot. Yes girl, act! For the most recent movie, she even got to do a song with Liam Payne for the soundtrack, which is actually more impressive than being in the movie itself. Fifty Shades is probably how half of you know about Rita, which is one of the saddest things you can say about someone’s career. It’s like the Hollywood equivalent of being known in the office for bringing a lunch that smells weird.

If you’re not aware of Rita’s legendary acting work or iconic music career, perhaps you know her from her brief stint on America’s Next Top Model. Remember back in 2016, when they tried to do a season without Tyra Banks? Remember how everyone hated it? Yeah, Rita Ora was the one who hosted that train wreck. I’m not sure who thought this was a great idea, considering that Rita is not actually a supermodel, but I can commend her people for getting her that gig.

So what is Rita Ora up to right now? Well, she just started a new European tour, which is supposedly in support of her second album that does not technically exist yet. She also just released a new song, “Girls,” featuring Bebe Rexha, Charli XCX, and Cardi B. It’s impressive that Rita got all these people (especially Cardi) on her song, but the song itself unfortunately got started off on the wrong foot. Notably, there was backlash claiming that the song is disrespectful to the LGBT community, because the song is all about how sometimes girls just want to make out with girls—but it’s implied they mean it in like, a drunk way. Because of the criticism, Rita was forced to clarify that the song is actually about her own experiences having relationships with men and women. This week, Rita dropped the video for the song, and I honestly love it. Rita looks hot AF, and things are great until Cardi B appears in her Jackie-O wig as some sort of hologram thought bubble. I love Cardi B, but I have to admit I’m confused why she’s here. At least Rita saved the best outfits for herself, a true betch move.

Also, this unintentionally shady tweet from Cardi B is my favorite thing to ever exist.

Maybe someday Rita will have a singular accomplishment that turns her into an A-list star, but for now we will just have to watch as the Daily Mail covers her every outfit change as if it’s a breaking news story. Hopefully she’ll continue being invited to every single red carpet event for no apparent reason, because at this point I would miss her. Next time you’re looking at red carpet photos and see Rita, take a moment to appreciate her. You’ll probably still have to check the caption to figure out who the fuck she is, but at least now you’ll know how hard she’s tried to become famous.