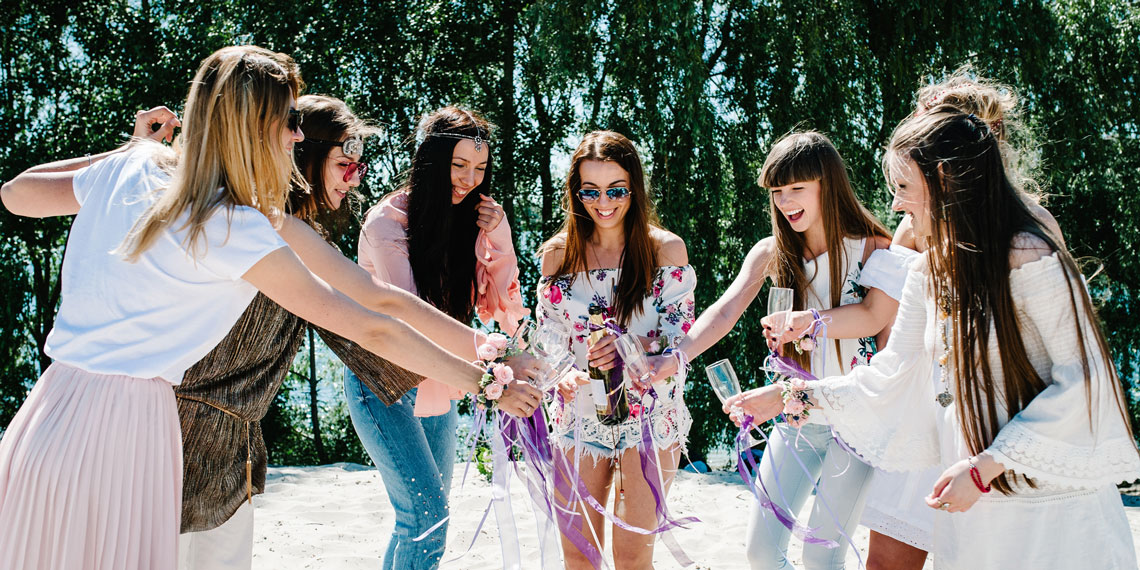 What You Can ~Really~ Expect From A Bachelorette Weekend

Ladies, we’ve made it. College is in the rearview mirror and real life is staring us in the face (and occasionally slapping us across it). You know what else happens during this phase of your life? WEDDINGS. On the bright side, you’ve lived this long. Congratulations, sweetie, you’re doing amazing. Unfortunately, this also means lots and lots of bachelorette parties. So, to prepare you for the debauchery that will result in a major loss of funds and so much damage to your liver you’ll end up on dialysis, I’ve outlined what a traditional bachelorette weekend will look like. Seeing as how most bachelorette parties only last one weekend (small mercies) I’ve decided to break down the event for you day by day. I apologize in advance for what I’m about to write here, and may God have mercy on your soul.

Day One: We Are All So #Blessed

This will be the best part of your trip by far. Seriously, cherish these moments for later in the weekend when the MOH demands you switch spots with her in the group pic because her outfit coordinates better with the person standing next to you and you want to set the whole damn bar on fire. This stage is all Champagne boomerangs and Insta captions with the words “live”, “love” and “ladies” thrown in there. As all of your friends start to roll in, the nostalgia in the air will be thicker than when someone turns on “Ignition Remix” at a house party. In fact, you’ll be so happy to see everyone that you won’t even want to cut Melissa for taking the bed you had your eye on, which she says she needs because she’s been having some “back issues” lately. Visually, there will be penises everywhere. Penises on the walls, penis confetti littering every conceivable surface, penis signs, penis straws, penis beer bongs. There will be more dicks than any of you have ever seen in your lives, and that’s really saying something. It’ll be like a dick-shaped nightmare you can’t wake up from, so better start chugging now.

Day One, Night One: This Will Be Just Like Senior Year Except For Funner

The Champagne is long gone by now and the group of rabid animals that you call your closest friends has moved on to drinking straight-up liquor. And by “straight-up liquor” I mean Fireball because it’s “the only shot I can take anymore!!” Prepare a grave site immediately for these people. It’s at this point in the weekend (6 hours in) that one of your friends will drunkenly admit to getting back together with her ex (again!) and another friend will say that she’s just adopted a dog even though she can barely keep herself alive. Laugh and take a shot because you’re feeling extra blessed to be surrounded by so many people who are just as big of a trash bag as you are.

At some point someone will suggest you head to the bars in whatever godforsaken destination city the bride has forced you all to pilgrimage to. Take this as an invitation to reenact any and all college memories that you have with these hoes. Grinding on each other in a way that would make your MeMaw want to set up a meeting for you and your pastor? Check. Trying to start some shit with the bitches that cut you in line for the bathroom? Also check. Hitting on your Uber driver after he lets you play “God’s Plan” off his Spotify? Check, check, check. If you’re single (hi), expect to be thrown to the shortest guy on the dance floor at least once during the night. Try not to slap the self-proclaimed “taken” girls when they ask why you never give guys a chance and all you really want to say is BECAUSE YOUR STANDARDS ARE HIGHER THAN HIS HEAD. The night will end with the skinniest girl in your group buying some questionable street meat to drunk eat. Outwardly, you’ll be appalled that they just inhaled a peanut butter chili dog that was definitely dropped on the ground first. Inwardly, you’ll be PISSED she didn’t offer to get you one as well. Pass out in Melissa’s bed and pretend you don’t hear her bitching about it to her boyfriend in the bathroom while everyone else is asleep.

Day two is the day the bridal party makes it blatantly clear that one of them is getting married and then makes the rest of the world question why… and also how. There will inevitably be some sort of day drinking excursion that will involve a brunch/bar crawl/bar on wheels/drunken hayride where you and your crew will bring dishonor on your families as well as the entire state you’re visiting. Every girl in this group except for the sister of the bride, who really shouldn’t be on this trip anyway, will treat this excursion like their own personal audition tape for Girls Gone Wild. The end goal of the day being to to make the bride’s fiancé rue the day she ever met any of you bitches.

Day Two, Night Two: Blackout Or Back Out

And I’m not just talking about your state of being by the end of the night. This is the night when the bride wears all white and the MOH threatens the entire bridal party at knife point if one of you dares mention wearing navy over black. By this point in the weekend all your faculties are starting to fail. Your liver is slowly shutting down one Truly at a time and your body is so bloated it’s starting to resemble a beached whale in a bodysuit. You would literally give anything to not have to look at another bottle of Champagne, but instead you’ll pop another one and half-heartedly upload a video of it on Instagram. At this point, the rest of the girls are also starting to dismantle. Half the group will pop an Adderall and be ready to drink all night, while the other half are lame AF and will try to convince everyone to just stay in and have a girl’s night. You’ll be land somewhere in the middle, but mostly because you already picked out a caption for the all-black everything group photo. Eventually everyone decides to go out thinking you’ll all just have “one drink” because there’s no way you could possibly get wasted one more time during this godforsaken trip. Fast forward three hours to when the bride has puked on herself and the MOH is crying in the bathroom about how everyone hates her and the weekend she planned. Ah, yes, just as God intended.

Welcome to day three of the bachelorette weekend. You’re more hungover than you’ve ever been in your entire life, but on the plus side you’ve thrown up enough to make your goal weight! Mazel Tov. Half the party will leave before 10am, leaving the rest of the you to scrub penis glitter off of the white marble counter tops while actively trying not to vomit in the sink. Think about calling in an anonymous tip to TSA about a bunch of blonde girls with suspicious luggage just so those bitches can feel the pain you’re feeling, but decide to eat the remaining cheese dip in the fridge instead. You’re so giving like that. You’ll probs spend the rest of the day praying for death and looking on the black market for a new liver, but, hey, your girl is GETTING MARRIED!