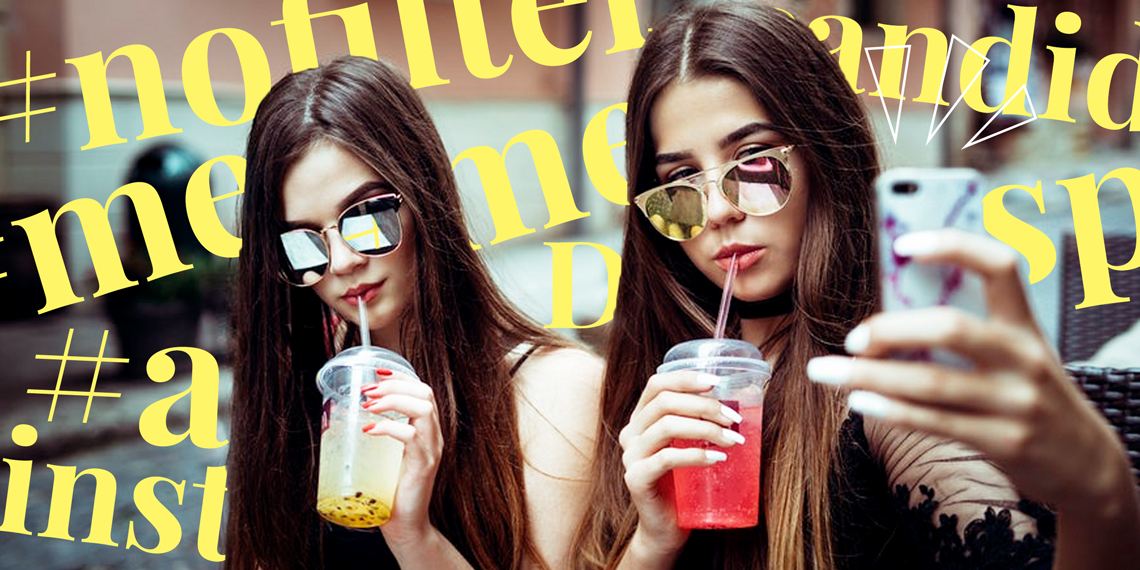 Celebrities are always celebrated when they do shit that the rest of us get a lot of crap for. For example, when Jennifer Lawrence screams “where’s the pizza?” she gets turned into an viral sensation and asked about it on daytime television. When I do it, I get banned from ordering on the Domino’s mobile app. Given the fact that celebs are considered way more likable when they keep it “real,” you’d assume that they’d be a little more relatable on social media. Instead, they use their massive platforms to try to sell sports bras to us peasants. That said, there are some celebrities who don’t suck on Instagram, and we need more of them. Here are the celebrities who actually, honestly, truly keep it real on social media and who are worth a follow.

I mean, duh. Chrissy Teigen’s real AF Instagram is the reason we all love Chrissy Teigen. She’s always transparent and hilarious. Like, when she did a hair roundup of her Met Gala look when she didn’t go to the Met Gala, instead of just desperately posting selfies and old outfit pics like the rest of the celebrities that didn’t go. Most people think that social media was created for a bunch of nerdy college kids to talk about hot girls on the internet, but we all know it was solely intended for Chrissy Teigen.

this year’s #metgala GLAM was #SUPER important to me as I wanted it to really embody the heavenly bodies theme!!! I think we nailed it!! Swipe for for #creds!!! First I shampooed my #hair yesterday with #shampoo then I let it sit for 4 minutes while i #shaved the areas I could see on my #body. Next, I used a #towel to dry my hair from roots to ends!! Then, I used a #rubberband to secure my hair into a pony that i was careful not to pull out all the way! Lastly, I pulled out pieces around my #ears and #neck ! Full tutorial coming up tomorrow !!!!!!!! Like and subscribe!!!!!

Anna Kendrick’s Instagram has like, the perfect ratio of red carpet photos to shots of her posing awkwardly in front of kind of funny scenes in sweatpants, with a solid few celebrity cameo selfies sprinkled in. When it comes to relatable social content, she practically invented it. She’s always actually relatable without forcing it.

Just something subtle Thanks CinemaCon ????

Being best friends with Kylie Jenner puts like, a lot of pressure on your social media game. I don’t know for sure, but I’m assuming that most days go like this: Jordyn taking nine million photos of Kylie, and then Kylie giving Jordyn 30 seconds to turn out some lewks and hopefully finding a pic that perfectly captures her best angles for the ‘Gram. It’s a job that I bet nobody could do but Jordyn Woods.

Peep that caption. THAT is how you caption a photo. None of this “nature is so beautiful” bullshit.

In the least surprising news you’ve heard since learning about a giant sinkhole in Washington DC that’s trying to eat the White House, Rihanna has made this list. RiRi is the queen (or are we calling her the priest now or something? IDK) of everything, and that includes Instagram spamming. When she looks good—which is always—she posts like, 45 pics in a row and is Unapologetic AF. (See what I did there?) Sometimes she skips the caption, sometimes it’s a few words about how she knows she slays everything, and sometimes it’s Cardi B lyrics. She wins.

For a product of a television show that typically breeds FabFitFun unboxers and nothing more, it’s kind of amazing that Catherine Giudici and Sean Lowe are so funny on social media. Their kids are adorable AF and I somehow never get tired of seeing Catherine’s content.

I heard black is slimming.

A pretty good way to see whether or not a celeb is fucking with you through their social media game is to assess their sponsored content. Like, how believable is it? Are they trying to get you to buy some shitty sunglasses so they can get a cut? Or are they trying to sell you some kind of appetite suppressants to break the internet? Kehlani’s #sponcon always has a mission, so you know her IG is real. Every time she posts a Fashion Nova outfit, the check goes to an LGBTQ charity instead of just to her personal account.

#compassionnova every post in @fashionnova donates money to an LGBTQ based charity ????????‍♂️ shop now!

It’s kind of impossible to scroll through Amy Schumer’s Instagram without picturing her screaming “KIM, TAKE MY PICTURE” at her sister for every photo. Although she basically makes a living off of shitting on celebs who take Instagram seriously, homegirl’s still gotta come up with a caption that tags her glam squad when she attends press events, and she does usually get creative with it in the process.

I guess I am an angel hair @kimmykuppkakes makeup @andrea_tiller

I’ll be honest, I unfollowed Amber Rose on Instagram because I don’t find her posts extremely compelling (too many kid pics if you ask me); that said, I can certainly acknowledge that she keeps it 100. (Are people still saying that?) When I think of people who post pics of their butt, being like “here’s my butt” rather than trying to think of some pseudo-motivational caption or like “check out my new haircut”, Amber comes to mind immediately. I respect her honesty. Her bio literally reads “I’m not a Hoe I’m a Hoé cuz I’m Classy.” Inconsistent capitalization aside, I love that. Sorry Rih, but Amber Rose is the definition of unapologetic, and I think that years from now, feminist literature will mention her work to reclaim the word “hoe” from its misogynistic roots.

Cardi B clearly takes the cake for the realest celebrity Instagram account. I know she has returned to Instagram after deleting it following a fight with Azealia Banks, but the 12 posts she’s shared since aren’t her true Insta style. I’m going to stay hopeful here, though. She’ll be back for real soon, prob.