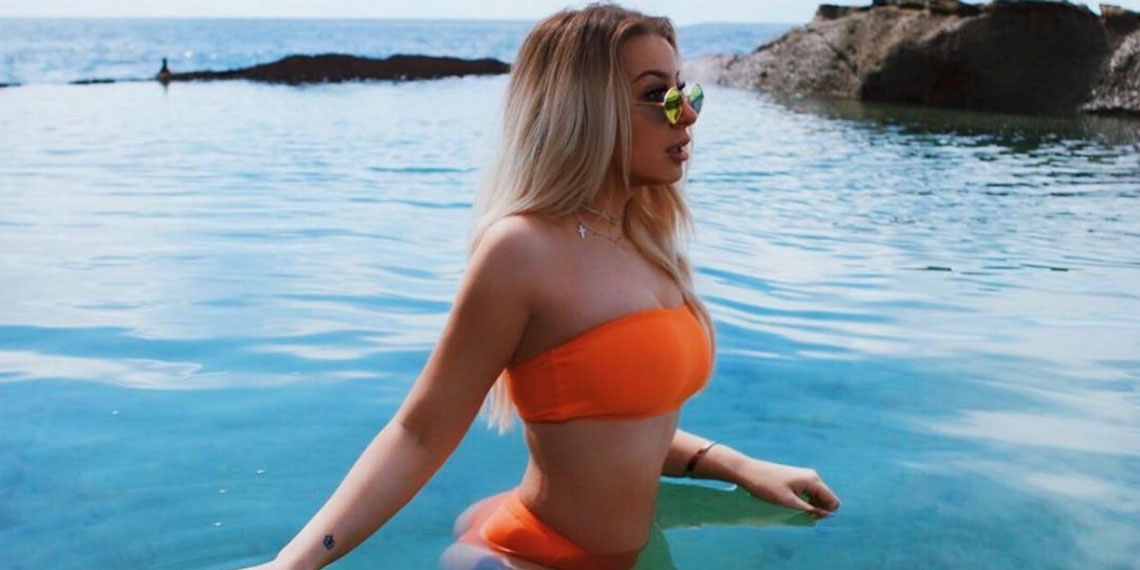 Photoshop Fail Of The Week: The Thirst Is Real

This week, I had to dive deep. I wanted to show something a little different than just a messy airbrush and body cutout job. Some of these influencers are real Photoshop pros—in fact, you’d have to possess a thorough understanding of anatomy to see how it’s not possible, because their edits are so seamless and don’t leave traces, like warped walls. Some of them.

And then, I bring you Tana Mongeau.

Who, btw, I have no idea who she is, except for this recent article about Bella Thorne, who she apparently was in a throuple with. I also know nothing of Bella Thorne, except that every photo I see of her, I feel like I can smell her. I don’t mean that in a nice way.

But I found this photo of her.

living in a dream no nightmares

This is a super hot photo and v typical for influencers of any kind. (Are Youtubers the same as influencers? Children, I need you to educate me.) I WISH I could take a decent bikini photo, but as you’ll see in my upcoming article where I edit the f*ck out of my own body to show you how stupidly easy it is, I always look weird. It’s like every angle is my unflattering angle. YOU’LL SEE.

But really, though, how do you get the perfect back arch, look thin, have your face look pretty, etc? All in one photo? How many tries does this take? Who is taking this photo? What kind of patience do they have?

However, this is a pretty good edit. PRETTY good. Professional for sure. There are no major “tells” that I can see. The shadow is believable, which is often a huge giveaway. But what really told me this is bullsh*t, aside from the “too perfect”ness of it all, are the legs/ass. That is a really small yet bubbly ass for her body. And same with her thighs, especially compared to the very warped and huge calves/feet! COULD it be the water warping it? Yes, absolutely. But the water could literally do almost anything. You’re telling me that by sheer coincidence, the water that made her monstrous calves the size of her waist, also gave her a teensy but shapely ass and little dancer thighs? How convenient.

I’m going to call bull. And now that we’re looking for “tells”, most of her body has blurry edges, especially around the stomach, chest, and upper (but not lower) arm. Now, as you’ll remember from previous articles, blurring happens when you erase with the airbrush tool, or if you move lines by transforming or smudging. COULD it be the lighting? Maybe. Her thigh also seems warped, like it’s bent in at a strange angle. Again, could be the water.

But then I found this.

God Bless Reddit, everyone. This a *REAL* photo of Tana with a fan in the same suit. Now, she’s not as posed/sucking in as anyone who takes a bikini pic would be. But she is significantly a different size IRL. The suit doesn’t look like it even fits. She also has the exact opposite butt as advertised. There is no angle that would make those thighs look so teensy. Thick thighs are in, anyway! She’s also got a way larger chest in the edited picture.

The reason I’m showing you this is so you know that influencer/celeb bodies are not as they seem on social media. Almost ALL of her photos are edited like this, with a pretend body that isn’t even hers. I will say that the photo on the right is super unflattering, and I’m sure in real life, she looks like a normal, thin girl. So why do the scary skinny and warped proportions to make you look like a different person? More women need to own their true bodies. I’m sure the original photo would have been hot AF, too, she just wouldn’t have crazy unrealistic proportions! Hey Tana? You don’t need to post fake thirst trap photos. Men will f*ck literally anything.

Does this surprise you about Tana? When you see influencer photos like this, do you believe it’s their real bodies? LMK in the comments!