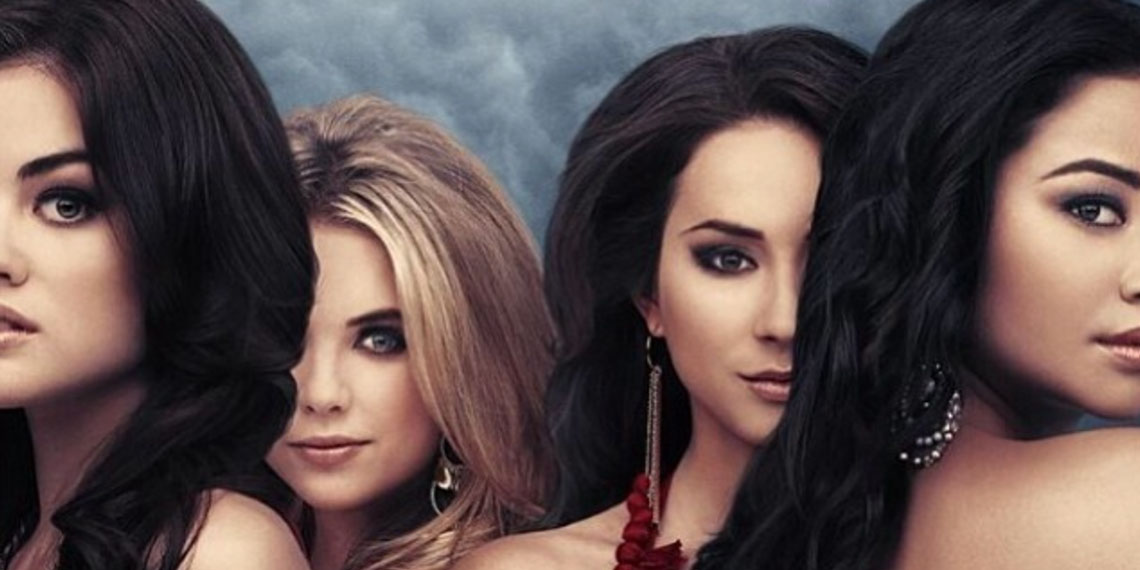 Photoshop Fail Of The Week: The ‘Pretty Little Liars’ Posters Are Full Of Lies

This week’s Photoshop Fail is one I mentioned previously, and a ton of you guys wanted me to analyze it. This is what’s so scary. To me, the second I saw this Pretty Little Liars poster years ago, I was like, “oh God, kill it with fire.” It’s a horrendous mutation of what women—even these drop-dead gorgeous women—look like. But So. Many. People. saw this poster (and others) and thought, “Wow they’re so beautiful, how can I look like that?” Spoiler: you can’t. Even the women in the poster do not look like that. It’s not real, nor should you want to look like this poster. When you consider that most of PLL‘s fanbase is young women/teenage girls, it’s straight-up irresponsible to put out posters like these, and even the cast agreed.

Wow @itsashbenzo I couldn't agree more. Very cool concept as always. But aren't we attractive enough women as we are? Why can't we just look like us. Once.

Now, all of PLL‘s posters were problematic, but this one was absolutely the worst. I mean, you expect Photoshop in professional ads/photoshoots. Hi, I do it as a side gig for quick cash because it takes a lot of education to be good at it but not a lot of time to do. To me, that means evening out lighting, fixing minor imperfections (stray hairs, lines in the clothes, etc), color adjustments. It does not mean making alien mutations of already insanely beautiful women. Seriously, does it get more attractive than this cast? And it still wasn’t good enough?

Both Ashley Benson and Troian Bellasario publicly commented that the poster was scary and looked nothing like them, and they both found it super disappointing. And according to Ash, these were actually photos taken four years prior. Instead of just taking new pics, they digitally amped up their makeup to Bratz doll levels and made their hair giant. Why do I somehow suspect the photo editors were men? Like, “Hm yes, bigger hair, automatically sexy.”

The part of this that is most insulting is that the PLL costume designer is goddess Mandi Line, who I am obsessed with. The outfits in the show were to die for. I just want Mandi to dress me like Aria every single day. The show could have easily paid for and styled an amazing photoshoot that didn’t make them all look like the aliens from Dude Where’s My Car?. SO weird how these huge budget shows keep doing this, like that one season of The Real Housewives of Orange County. Bad Photoshop is not a solution to skipping a photoshoot!

So, how much work was actually done here? I don’t know where the original photos were from, but let’s just compare based on what the stars really look like.

Firstly, it’s so weird that they all have half of a face. Lucy and Shay apparently weren’t good enough to have a full nose, either. But aside from the strange cropping, I tried to match it up with a real pic of Lucy at a similar angle. Aria was always my favorite (I had secretly hoped she would be A… such a good twist!). However, you can see from the photo that there’s a big difference between a gorgeous woman with makeup on and an airbrushed-to-sh*t ad. Her skin texture is completely gone, she’s smoothed out like a plastic doll, they went crazy with the burn tool all over her eyes to make them sunken, and pulled them bigger. They cleaned up her brows, and my favorite part—the hair. They gave her some kind of bulbous skull deformity that is the only excuse for why her hair reaches back four extra inches from where her actual head is. This is what I don’t understand about extreme editing. It would have looked better just as an actual photo that was posed that way!

Sooooo they removed Ashley’s other eye. It’s so funny because it’s such a close call. It’s almost possible that the wasp’s nest on Lucy’s head could have covered up Ash’s eye. Almost. However, the comparison photo I grabbed is a straight-on shot. As we can see, in the edited poster one, she’s slightly tilted to the side, which in perspective, would push her eye more towards the nose. They literally just took it out. When you have these weird close calls in editing, you just fix it. Like either expand the hair even more (what difference would it make at this point, honestly) OR leave a little bit of eye showing. But no. It’s been removed for the sake of beauty. And just look at that hair. She looks like she’s going to star in a Vegas drag show after this. In addition to the plastic smoothing and eye job Lucy got, they clearly shaved down Ash’s nose and blurred it into her face. She got to keep her full nose unlike the other girls, but it still was not good enough for ~*beauty*~. Also? Ashley Benson is the epitome of the hot girl, just ask her girlfriend, supermodel Cara Delevingne. She! Does not! Need! Nose shaving! Or an eye removal. Who knew we’d be taking fashion tips from The Handmaid’s Tale?

This just speaks volumes to how good of an actor Troian is—it’s been years and I still can’t accept that she isn’t Spencer IRL. Like, it feels wrong calling her another name. Soooo this one was really interesting. First of all, Troian definitely got the worst hair. It’s actually twice the size of her whole head. But I actually had trouble getting the faces to line up, which means they edited her entire face. Some of it could be the angle—I’m matching up different pictures, years apart of course, but Troian’s jawline is clearly just straight-up in a different spot than it appears in the ad. Which is weird because I feel like having a perfect, defined jaw like that is normally coveted? They moved it, softened it, murdered Troian’s nose, and even stretched her eyes into more cat-eye shapes, and her eyebrows are in a completely different spot. Some of that is just her expression, but it’s really, really far away from the actual shape. They even diminished her high cheekbones—also a supposedly attractive trait. I can see why she was so offended—these women don’t even look the same when you see the side-by-side. And real Troian is way prettier (and less terrifying).

Okay, this one was harder, because Shay was posed at a weird angle and I couldn’t find an *exact* pose to match. So I flipped a photo of her. So if you’re like but “omg Shay has a mole on this side,” yes, you’re right, because I flipped it. Anyway. Um, the first horror with this photo is they bleached Shay’s skin, which I never noticed in the original. I guess I just figured it was the lighting, but you can clearly see that regardless of color tone, her skin is way, way too lightened in the edit. Horrible. While it’s not an exact angle match, I will say they seemed to have shaved her chin a bit, and got rid of her cheekbones (again… why?), and diminished her nose. In addition, of course, to the big hair, scary plastic skin, and sunken eyes, of course. If you’re messing with Shay Mitchell, you obviously don’t think any woman is attractive.

I hope this shows you how horrific Hollywood is. Every poster you see is edited to this extent—some just are better at hiding it. Kudos to the women of PLL for calling it out themselves. They help get rid of the toxicity associated with this level of quasi-perfection. But really, does anyone find this attractive? I think it looks crazy.

In happier news, I am pleased to say that Katie Maloney did something that I found both hilarious and body positive.

She posted an UNEDITED video zooming in on her ass, with the caption “I dongivafuck”, which, respect. I generally don’t care for/seek out ass videos, but for how much flack this woman gets about her body, I appreciate that she’s owning her shape, her ass, and telling you to GTFO. We need to see more female celebs and women on TV that own their shape at any size. Good for you, Katie! Your body looks awesome, and people pay a lot of money for asses like that—just ask the Kardashians. More of this, please!