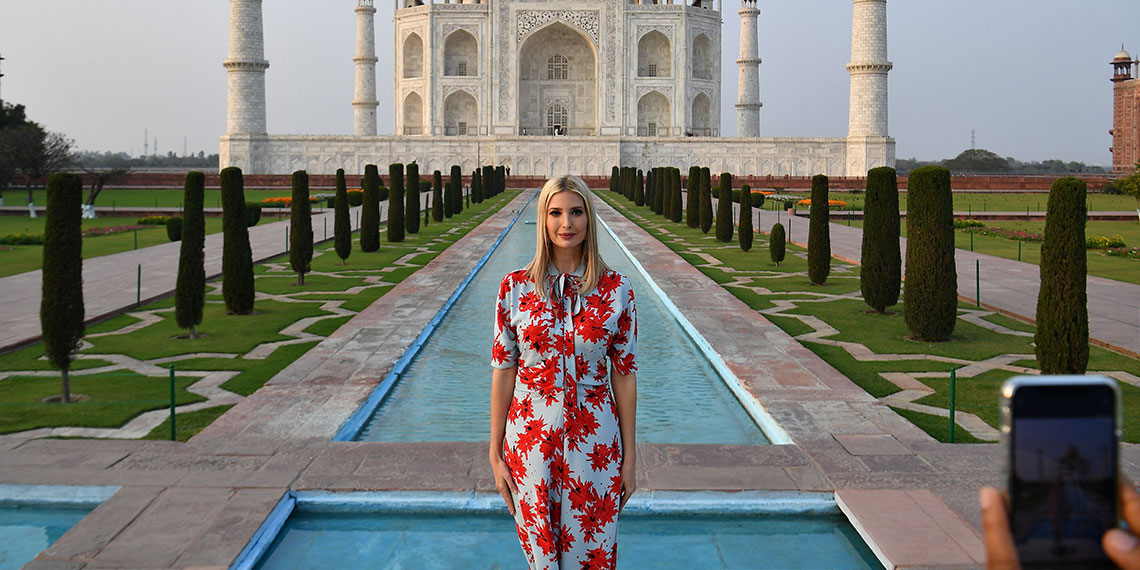 Photoshop Fail Of The Week: The First Daughter Of Fails

There’s a reason I write Photoshop Fails and not The Sup newsletter. It’s because I have no idea what’s going on in the world, ever, and I need to read The Sup to have it explained to me in small words. I mean, I educate myself when it’s time to vote and do my civic duty, but other than that, I find it super depressing to keep up with the news, especially now. And it’s dull. Like, even if we have the exact same political opinions, I STILL do not want to hear you talk about it, or even worse, ruin my happy hour with it. It’s boring and mostly awful information. Shut the f*ck up. Also, do you notice the people most excited to share their political views are the ones no one ever asks? I’m telling you this because I really do not care about your political views and your political comments. This series is about one thing, and that is brazen misuse of Facetune, people.

And with that, I bring you Ivanka Trump.

The grandeur and beauty of the Taj Mahal is awe inspiring!

I have nothing nice to say so I just won’t. But, we get to play my favorite game, which is: what’s wrong with this picture?

Look, I realize this photo was taken in Portrait mode, and that can blur up a background. So like, I don’t find fault with the fact that the water isn’t blurry in between her body and arm, for example, because that clearly wasn’t picked up as background by the camera for Portrait mode. Although I do think the water lines look particularly parallel and unnatural. But what I can find fault with is that IVANKA CHANGED THE ARCHITECTURE OF THE F*CKING TAJ MAHAL!

Guys, what the actual f*ck? Ivanka has used Facetune to alter this image and the huge, iconic pool in front of the Taj Mahal is now wavy, and bulging in weird places, and even dips down right where Ivanka’s waist is. I drew a straight line underneath so you can see how off it is. Here’s the thing, even if the camera angle wasn’t perfectly straight, the line would be tilted but still straight. Not bulging and cutting out in *convenient* places!

And in case you think it’s just the pool or the angle, here’s another photo Ivanka posted:

That’s a straight pool. So why would Ivanka decided to warp the pool lines just for fun and around her waist for absolutely no reason? Well, she wouldn’t. She clearly edited this photo to make herself look like the sickly, unrealistic Instagram models we all know are lying liars who lie about their bodies. Ivanka is also really thin, so I’m not sure why she would bother, but yet, I feel this way about almost everyone who does this. It really never seems to be actually overweight/out of shape people who do the heavy editing, right? It’s always these totally thin girls that want to look emaciated. I don’t get it, but here we are.

So for those of you who want to fight me on this, and claim “It’S tHe AnGLeS”, I have some news for you.

Hate to break it to you guys, but that’s a straight f*cking pool. And I can’t help but notice something else.

Although to be completely fair here, these photos are taken at different angles. But even still, Ivanka is clearly way, way, thinner in her own, wonky pool version. She goes from a fit, normal, thin woman to scary Barbie doll with a waist smaller than her head.

So, this just goes to show, it doesn’t matter if you’re in The White House or trying to sell laxative tea on Instagram, inconsistent background lines only mean one thing: LIES.

I’d say I expect more from a public figure leading our country, but let’s be real, this is the least of the Trump family’s offenses. Maybe she should show her dad Facetune, and he’d waste his time making himself look pretty instead of causing a World War via Twitter?

Did you guys spot the Fail immediately? Are you surprised Ivanka Facetunes—especially to make her already thin waist even thinner? Does anyone think these bobblehead bodies on social media are real? How do you shut up your politics-ranting friends at happy hour (seriously, I need tips)?