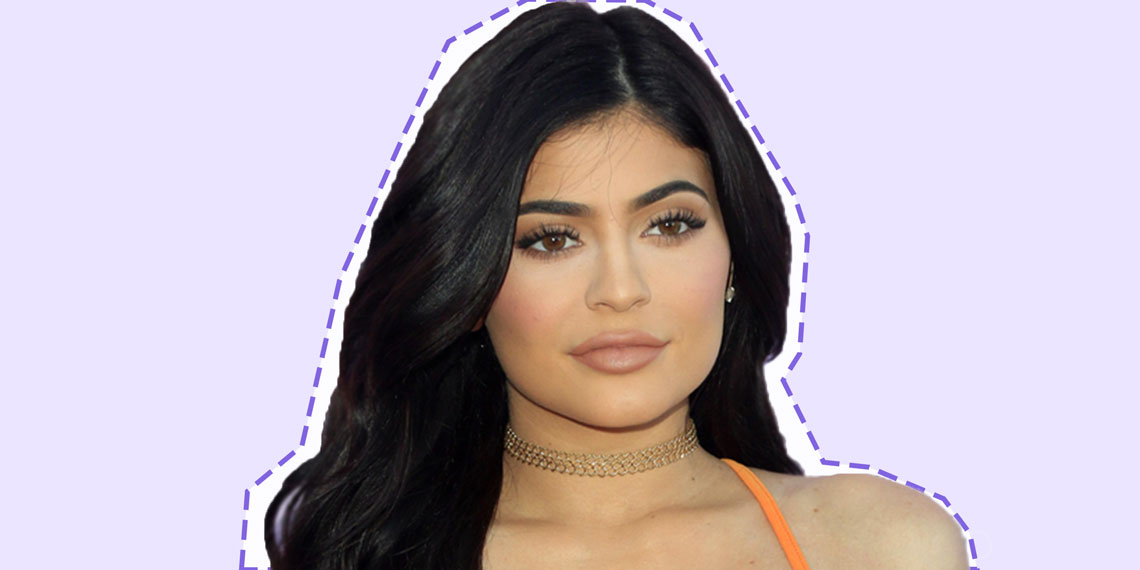 Hello friends, welcome to Photoshop Fail of the Week, and another Kardashian/Jenner fail, because THEY ALWAYS GIVE ME MATERIAL. Sorry, it’s just the way it is. Also their edits are sooo unnecessary and so funny. Between the world’s best surgeons, makeup artists, photographers, and trainers, MUST they, MUST THEY continue to edit? They’re all mostly cyborgs at this point and yet a realistic flattering photo is still not good enough? Come on, man.

Today is a super weird edit by definitely not self-made billionaire Kylie Jenner.

She looks gorgeous, that’s for sure. Her makeup is flawless. Whoever did the edit paid attention when they cut her out for the white background. No soft edges like the sad Revolve girl, and they even left details like the hair texture and studs on her dress. Very well done. They definitely, without a doubt, cut into her body, since her shape is a little too far-fetched anatomically IMO, but they did it seamlessly. Her cinched waist goes too far in and the angle is too clean, but at least they cleaned up the rest of it to match. There was some debate about her hand looking too big, but honestly, that is hard to tell, it could just be the angle.

What stands out to me is the airbrushing. This is my biggest complaint with people using Facetune, that slaps on airbrush-esque makeup and just makes everyone look blurry. This photo wasn’t done with Facetune, but it’s the same general problem. People *clap* have *clap* pores *clap*. This is the same argument I’m constantly having with my mother ever since she discovered Facetune. She sends me these scary images of her and my 88-year-old grandmother with no wrinkles, totally blurry, AND with anime eyes. And then she denies that it’s been edited. All of you, stop.

I don’t understand why anyone airbrushes photos, especially professionally taken ones. In fact, when I do photo edits, to make the images look more high res, I actually use a brush to paint pores back in. I get why you wouldn’t want acne or a face full of blackheads, but I promise you this woman is wearing no less than a gallon of foundation so none of that would matter anyway. But the worst part is that they did a sloppy-ass job on the airbrush. What kind of scary robot Barbie is this? She looks like plastic! Cold, shiny, hard plastic!

Her face is so smoothed, but the problem is that makeup and lighting change the color of your face. When you airbrush, you melt these shadows/highlights together. Sooo what happened here is now Kylie’s face looks like three separate color sections, with definitive lines!

It’s like they smeared out her eyeshadow lines too far out to create the first section. Then they spread the lighter color of her cheeks (most likely from undereye concealer) into its own section, creating lines below. You can even see outlines around her eyebrows where they stopped smearing to preserve the hair texture of those. In fact, it looks like they actually cut them out, smeared the rest of the face, and then just pasted them right back on. Her nose is even blurred so badly it almost looks like when we used to take Myspace pics and up the contrast so no one had noses and only occasionally just little nostril dots. Those were dark times.

Also MIA? The skin texture from her lips! Look, her lips look fake already, but making them line-free and completely matte makes her look more like a blowup doll than she already does. Even matte lipstick would have light hitting it, unless Kylie has a new lip kit coming out called “The Black Hole” that no light can penetrate. (TBH, would buy.) But even the lip blurring caused a color change line, where they left her lip creases on the inside. This gives her a common lipstick problem most women get when the inside ring of your lipstick wears off. My friends call it “butthole lips.” I highly doubt Kylie wouldn’t reapply lipstick before the photo shoot, and if she did, this is the kind of thing that is perfectly acceptable to edit in a photo. Instead, they caused it!

They also airbrushed her entire neck, which, unless your neck is stretched, will always have some kind of lines or skin folds. Again, is she plastic? I think she’s plastic. Is this the Madame Tussauds wax museum version? To answer that, let me show you the true masterpiece of the photo:

Kylie’s hands have been airbrushed out so completely, the lines are barely visible. This proves this is really Madame Tussauds Kylie. To me, this was the creepiest, cyborg-iest part of the photo. Hands have lines; why are we pretending they don’t? If you’ve read my sunscreen articles, you know that hands are the first thing to age and are the true giveaway of all celebrity aging. But Kylie is hardly old enough to legally drink at a bar. She probably doesn’t have veiny, bony, wrinkly hands to airbrush anyway. And even if she did? Leave them alone!