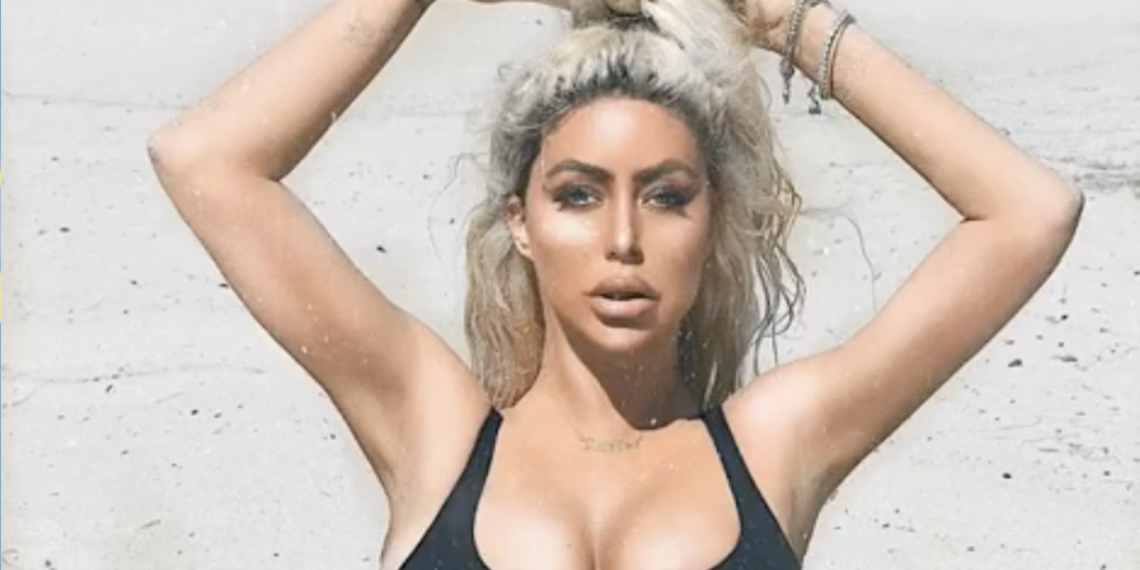 Photoshop Fail Of The Week: Aubrey Has Been Abducted

In my weekly perusal of Instagram for the next topic for these Photoshop Fails, I discovered something very, very scary. And that is the Instagram of Aubrey O’Day. Full disclosure, I don’t really know who she is. I am told she was in Making The Band, which was a reality show were P. Diddy (are we still calling him Diddy?) got a bunch of women and forced them to have regular singing and dancing competitions over the course of TWO seasons with the promise of maybe choosing a few of them to form a band. That band did eventually become Danity Kane, which had approximately two hits, one of them being that song “Damaged”. I didn’t really know or care too much about any of that. But I did see Aubrey on Famously Single and she acted like a complete, straight-up psycho. She was very obsessed with Pauly D… which… really? It was weird. Though they did date for like, a while. She also famously had an affair with Donald Trump Jr., and there’s even a song on her 2013 album called “DJT.” Honestly, a messy icon.  However, her relationship behavior is NOTHING compared to her Instagram as of late. Here’s a sampling:

To anyone that tried CoolSculpting like me, and saw little to no results.. AirSculpt gave me actual results and the whole experience was painless and quick. The #AirSculptChallenge is worth it! If you have that excess back fat that never seems to go away @EliteBodySculpture is a lifesaver! AirSculpt can also tighten your skin and shape you right up! No painful surgery or down time, you are awake the entire time and in and out in under an hour!

And we can’t forget this gem:

happy Pride! when all Americans are treated as equal, no matter who they are or whom they love, we are all more free. @fashionnova

That’s not an arm, that is a toothpick.

Also, Jesus H Christ, woman. This is not even a human face:

Look, this woman obviously has had a lot of work done, but here is my short list on edits:

I honestly just considered coloring in the entire thing with my red pen.

Okay, to sum this up: first of all, her whole face is just majorly butchered—but this is def a combo of surgery and Facetune. She’s extremely airbrushed EVERYWHERE and random highlights/shadows are added—like around her breasts, and the weird lines in her arms and thighs, and the fact that her stomach is CAVING IN at the middle. An ab crack is one thing, but this doesn’t even look like abs. Her lips are massive, but I fear that may actually be the work of a surgeon. The nose is completely demolished. Her eyes are enlarged and stretched out to the sides. All the arrows are showing where she pushed something in and the lines are messed up. This is why her upper body somehow looks unattached to the background—like she’s on a green screen or something. The outlines of her arms and the shadows just do not match up.

All the circles are showing where the image was stretched (to make her look thinner) and that section gets pixelated. I showed that problem in this article. Pixelation is the biggest giveaway of stretching aside from giant arms. There are even spots where the background is seeping into her body. You can also see on the top left where the whole sand dune is caving into her arm where it was edited. All of it is just very, very bad.

For reference, here is a picture of Aurbrey taken earlier in 2019. (Literally January 1, but I’m still counting it. It was not THAT long ago.)

See! Surgically enhanced, sure, but a hell of a lot more normal than the cyborg she presents as on Instagram.

The one thing I will say is that although Aubrey CLEARLY majorly edits her body, at least she’s not making herself stick thin, except for the arms, which just don’t seem to match the rest of her. I’ll take what I can get in this age of f*cked up Instagram culture, I guess. But I love that she airbrushes and butchers herself (especially her face) and then is like, “lemme add a cute film grain animation over it. That’ll fix it. The perfect touch.”

The problem that some of these celebs really don’t understand is that their features, especially their facial ones, make you look like you. You can’t just give yourself a generic nose and huge lips and eyes and think it will look like you. This is edited so poorly, Aubrey no longer looks like a person, let alone like herself. She looks like an alien from a planet that has just vaguely seen a cave drawing of what people are supposed to look like. Or perhaps even a child’s drawing with giant eyes and stick line noses. You can’t even convince me that this is a human person. I’ve seen CGI people that look way more realistic.

Aubrey, I’m not sure how doing this to your photos helps your self-esteem. This is a thing of nightmares. If you showed one of your photos to a small child before bedtime, they would not be able to sleep for fear of you coming out of the closet and devouring them. Put the Facetune down, woman.

Have you seen Aubrey’s Instagram before? Is she one of the scariest Facetuners you’ve ever seen? Who else does this bad of edits? LMK in the comments!