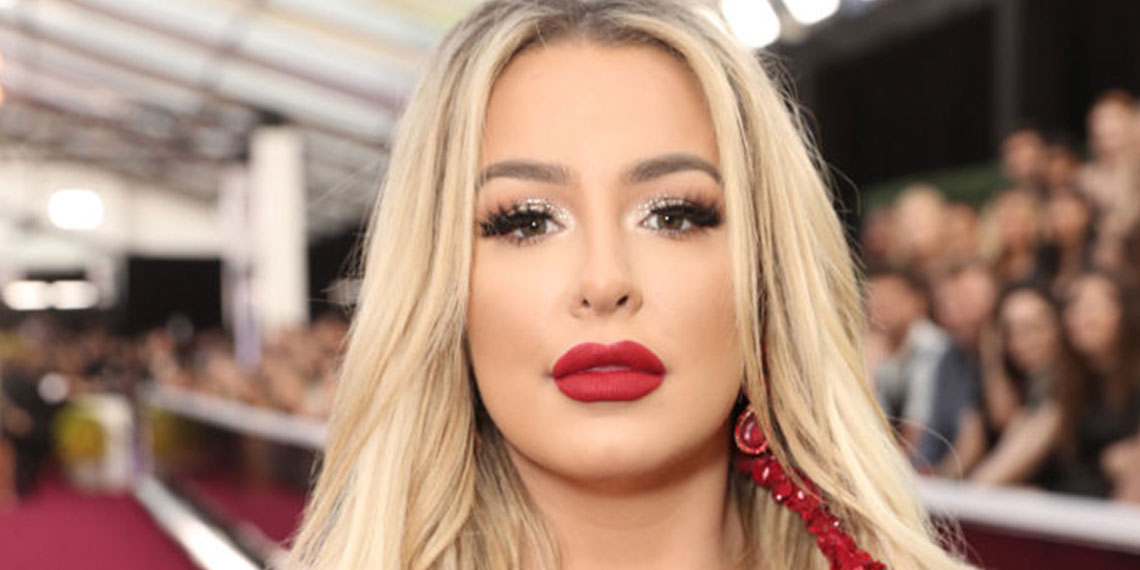 Photoshop Fail Of The Week: An Entirely New Face

Another day, another celebrity delusionally telling themselves that the picture they post on Instagram is what they *really* look like. Tana Mongeau is an open Facetune offender. I mean, at least she admits it. But I still think it’s super toxic to edit your photos so much and project this scary, sex doll image. I mean, aren’t most of her fans teenagers? This is what they think women are supposed to look like? It’s just icky. I’m not against photo-editing, but Tana really just takes it way too far. Why even post pictures when that isn’t even what you look like? Also, it’s unclear what Tana actually does or why people watch her. Are any of you guys fans of hers? Please explain in the comments. Every time I see anything about her I just go, “Oh honey, no.” Tana seems needs Jesus and possibly Oprah.

So Tana was at the People’s Choice Awards (again I ask, really? Who invited her? Why?) and there were a lot of paparazzi photos taken. So Tana took a few of these photos and decided to um, enhance them, in her eyes. Also known as copy-and-pasted an entirely new face on herself.

Okay, Tana. Sure, Tana. That’s what you look like. Also, I REALLY LIKE how those candy wax lips we wore as a joke as children are now what’s considered attractive. Tell me Tana is not just wearing Wacko Wax lips. I mean, honestly.

Look, I just stuck the Wacko lips on her instead.

I see no difference.

Okay, so short list on this photo, she’s insanely airbrushed, her eyes are blown TF up, her makeup is pasted on, all her proportions are warped, and her nose looks super weird. Also, most notably, she doesn’t look anything like what the real-life Tana Mongeau looks like. That’s probably the biggest giveaway for an edited photo: when it doesn’t even look like your face.

But before the five people in the comments that are 14 years old and actually like her try to lay into me like, “it’s the lighting, she does look like this”, I have news for you. Unfortunately for Tana, she seems to forget that Getty Images are PUBLICLY ACCESSIBLE. Meaning you can just look up any pap photos. For free. Unedited. (Now, you can’t legally download them unless you have a membership, but thankfully, we do.) Unless of course you’re the Kardashians, and pay the paparazzi to pre-edit your photos. But Tana apparently does not do this.

The best part is that her lips are still unfortunate. But the rest of her looks great! Like a pretty, human girl. Some of her edits she could just change in real life—okay, just wear darker eye makeup at the next event to make your eyes look bigger. Get your brows microbladed if you want them thicker. I just got my eyebrows microbladed as pre-chemo prep and they look amazing, could not recommend higher if you have sparse brows. But what is with the entire new head/face/eye color? Why give herself an entirely new jawline? It’s like how James Charles always gives himself a blockhead on purpose. Children, what is you doing?

The differences here are very obvious, but here you are anyway:

And she even removed her ribs and shoulder. Look guys, we all have insecurities, but things like your jawline, your face shape, your weight, your eye color… these are what make you look like you. You can’t give yourself a new head and be like “IT’S ME! I’M SO PRETTY!” It just does not work that way. And it really just makes you look sad.

To sum up: don’t give yourself a brand-new head and call it an edit. Microblading looks amazing and is a good decision if your brows suck or you’re about to be bald from cancer treatment. You should not be looking to Tana Mongeau for inspiration or self-esteem.

And now, a lesson in why people suck and celebrities feel forced to edit the sh*t out of themselves in the first place:

Someone attacked Queen Nastassia Bianca Schroeder for having… feet? Apparently Stassi’s feet look too old, according to a fan. Wtf is wrong with people? It’s not enough to have unattainable beauty standards for our faces, torsos, butts, boobs, etc… now we have to worry about our feet? Stassi’s comment was the best, though—but really, do they expect her to Photoshop her feet? Everyone needs to lay off picking apart what celebs actually look like without all these crazy filters and edits. This sh*t right here is why we’ve shifted to such a gross overly edited culture. We need to embrace people for showing their actual looks. Also, it’s just her feet and they look like feet! I mean, F*CK OFF, people.

What do you think of celebrities that just smack on a new head on their photos? Do you appreciate us calling out the fakeness of the editing we all see on social media? Does it encourage you to edit less when you can see how obvious/bad it looks? Would you ever edit your feet? WHY DO PEOPLE LIKE TANA MONGEAU? LMK!