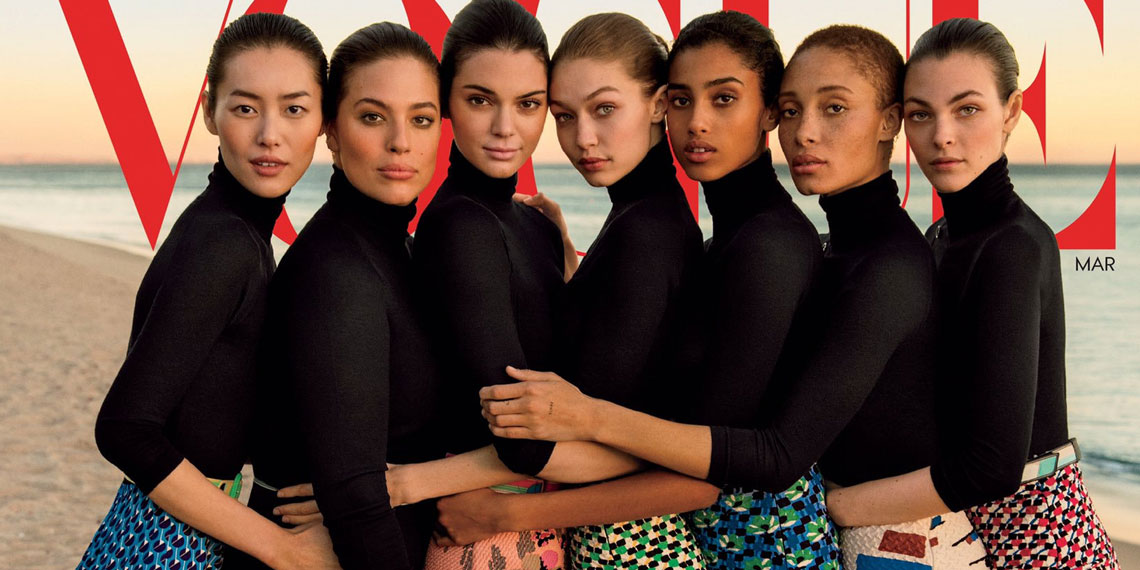 Photoshop Fail Of The Week: A Freakishly Long Arm

Hello again, friends. In this week’s Photoshop Fail, I did a lot of research. And after last week’s foot disaster (seriously, would LOVE an explanation for that still, though), it got me thinking about how it’s even possible for professional, high-paid photo retouchers to screw up so badly. Like, I guarantee the photo editor for Vogue probably makes more than my entire cost of American private college education in a year! Those are the true professionals, right? They wouldn’t royally screw up, right?

Do you see where I’m going with this?

I started going through old Vogue celeb covers and that’s when I found this gem. This is the cover for March 2017, featuring many a hot celeb, like Kendall Jenner, Gigi Hadid, Ashley Graham, I’m sure those other women are also famous yet I don’t know their names, etc.

A bunch of gorgeous women on the beach. This is also when Ashley Graham was really making strides by breaking the wall that all models had to be stick thin. Which, like, you would think if Vogue hired her, they knew that. Right?

Vogue, March issue, with all these lovely ladies pic.twitter.com/fOXClR8G30

Except. They hired a plus-sized model for the cover, yes? They understand that means she is not the same size as the typical teeny model, yes? If you look at the photo, she looks almost the same size as the others, save for her thigh. But that’s not where the photo really went wrong. The true problem is this:

Um. Look at Gigi’s whole arm. In their effort to slim down Ashley Graham—which like, they featured her for diversity and then tried to take it away, nice job, Vogue—they shoved everyone else over. And in the process, made the other women, particularly Gigi, the Wacky Waving Inflatable Arm-Flailing Tubeman from Family Guy. Do you remember that episode? It’s those balloon guys that they put outside of car dealerships to draw attention. He looks like this:

By dragging the rest of the girls into Ashley, it hides the part of the image that showed her true width. There was probably more space between her and Kendall originally. They squashed them together to hide Ashley, and then threw Gigi’s arm over it to make it look natural. Resulting in a freakishly long arm. And then now Gigi is in the wrong spot, so they used the next girl’s arm (who is this girl? I need to study up on fashion models) to cover her. All of it is incredibly stupid and pointless and looks terrible. The problem is that the arms were positioned on each other’s bodies in the original photo, so they can’t take them out or move them without losing some of the body.

Here’s how they should have done this edit. The correct thing to do would be to TAKE A BASIC ANATOMY CLASS, OH MY GOD, and then move their arms to a normal length. Then, just copy the patterns of the shorts/swim bottoms to extend them out to cover the missing parts of the bodies where the arms used to be. However, in my expert opinion, the more correct thing to do is to leave women’s bodies alone, especially when YOU ARE HIRING THEM TO SHOW BODY DIVERSITY.

Vogue? Are you telling me it’s more attractive to give women giant noodle arms than it is for them to be of average body type? You hire Ashley for diversity and then are like, “wait, not like that?” SERIOUSLY?

No wonder women feel self-conscious all the time. Here I am walking around with normally portioned arms, not realizing they should be the length of my entire body. What other Photoshop fails would you like me to dissect? Let me know in the comments!