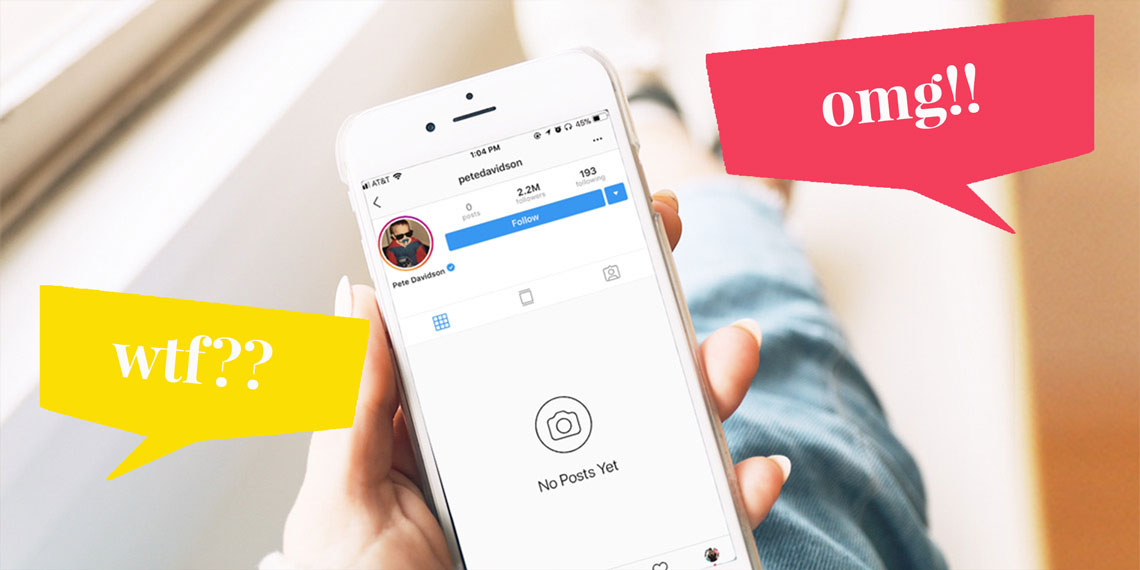 Hello, and welcome back to your new favorite reality show, WTF Is Going On With Pete Davidson and Ariana Grande? Last week, I updated you on all the major happenings with this summer’s most fascinating couple, and I really thought that would hold us over for a few weeks. I mean, how can two people possibly do so many important things? Well, Pete Davidson just went and proved me completely wrong, so here we are. After spending the last two months running a glorified Ariana Grande fan page, Pete deleted every single one of his Instagram posts on Monday. It’s all gone.

I gotta say, I’m probably more surprised than I should be. Pete Davidson’s Instagram is the equivalent of a star that burns really bright for 10 minutes, then is done. No one cared until he was with Ariana, and now here we are. But why? There are several potential sides to this story, so let’s examine them.

After deleting all his posts, people understandably had a lot of questions, so Pete posted one last story to clarify the reasons behind his decision. Here’s a screenshot of that story, which is your classic Notes app screenshot, accompanied by lots of peace signs and every single color of heart emoji:

Hmm, much to consider. This whole thing reads like something Pete would say in real life, so at least I believe that he actually wrote it. I can’t help but roll my eyes at the parts about his real life being “f*cking lit,” but I do like the part about referring to himself as “your neighborhood goon.” I’m gonna start using that. And honestly, I understand the part about Instagram not making him feel good. I have approximately two people in my life that I would consider haters, and it’s already a lot for me to handle. Pete has very publicly struggled with depression and addiction, so he should definitely do what’s best for his mental health.

Going with Pete’s explanation, it would seem like the last straw for him was something Ariana posted on Sunday. It was a cute tribute to her late grandfather, who passed away four years ago. Normal stuff, and if you’ve followed Ari for a long time, you know that her family is super important to her. People got heated when Pete commented “cutie” on the photo, and I gotta be honest, that’s a weird thing to say. Pete said that he was calling Ari’s grandpa a cutie, but that is not normal language people use to describe an 80-year-old man who died four years ago. It’s language people use to describe their fiancée when they don’t realize they’re being annoying AF.

Whatever Pete actually meant, #CutieGate was too much for him to handle, and now his Instagram is more empty than my brain after watching seven consecutive episodes of Real Housewives of Beverly Hills yesterday. But is there more to the story than Pete being tired of the trolls?

Obviously, Ariana Grande and Pete Davidson have been very public with their relationship up until this point. A lot of celebrities these days are ultra secretive about new relationships, but they’ve practically been begging for attention on Instagram since day one. We all love knowing everything that’s going on with these two, but maybe everyone doesn’t feel the same way. WTF do I mean by that? Yesterday, blind gossip site Crazy Days and Nights posted an item that seems to be about Ariana Grande, saying that a certain singer’s PR agency is asking her to choose between her agency and her S.O., based on some information that they don’t want to go public. Neither Ariana nor Pete’s team has confirmed the rumor, but wouldn’t this add an interesting layer to this story??

More than likely, Pete truly just needs a break from the social media onslaught, but this couple has put us through too much craziness this summer not to wonder what’s going on. Ariana still has an upcoming album to promote, so her Instagram page probably isn’t going anywhere. Unless she pulls a Taylor Swift. Ugh, please no. Ariana has now turned off her comments, which is a major downer, but will she keep posting pictures of her and Pete? You better believe I’ll be watching with a magnifying glass, because I truly cannot get enough.