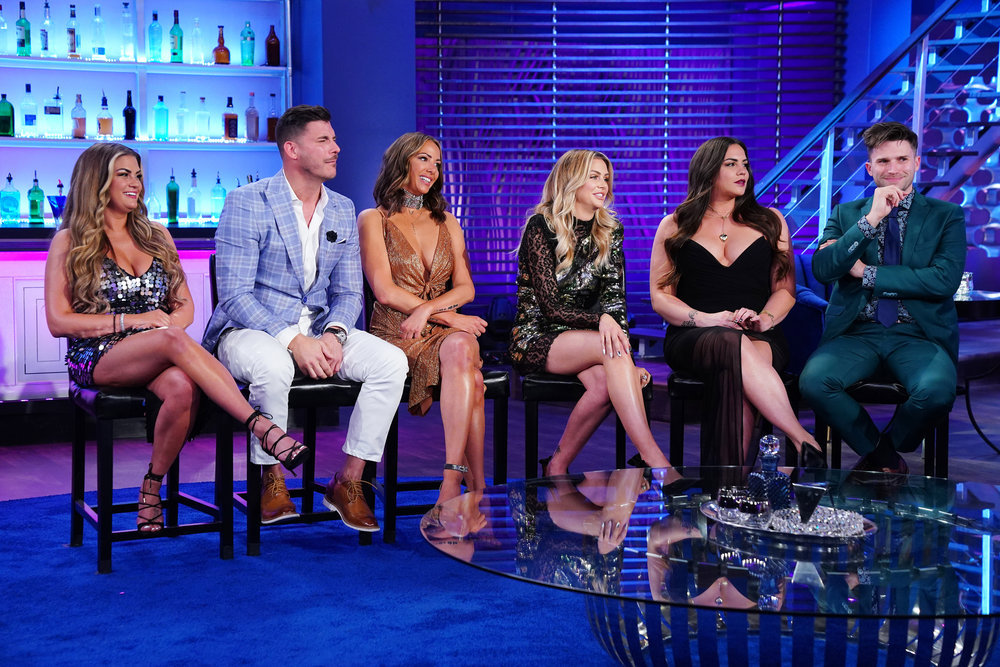 Our Predictions For ‘Vanderpump Rules’ Season 8

Do you love Bravo? Of course you do, you’re reading this article. We just launched @bravobybetches, your new favorite account for Bravo memes, gossip, and behind-the-scenes sh*t. Follow @bravobybetches now!

Somebody tell Santa that he can cancel Christmas, because I’ve already gotten the perfect gift. Bravo just announced that Vanderpump Rules season 8 is scheduled to premiere on January 7, 2020 and I can’t imagine a better way to ring in a new decade than with an extra 10 pounds on my waistline and a middle-aged wait staff struggling to remember if they cheated on each other on my TV screen. And Bravo dropped the trailer on Friday! Andy Cohen, you’re too good to me. Based on what we know, it looks like this is going to be (to borrow a phrase from real life angel, Chris Harrison) the most dramatic season EVER. And I’m not basing this solely on the trailer—oh no, there has been sh*t going down during this off-season. We’re talking social media unfollows, vaguely negative comments, and people not showing up at parties. This is LEGIT. So, I’m going to gather up all this evidence, call myself Veronica Mars, and piece this season together for you.

The Witches Of WeHo Break Up

Rumors have been brewing (get it, because they’re witches? Sorry, I hate myself too) that Katie, Kristen, and Stassi have been having problems lately. Back in October, Stassi confirmed those rumors on her podcast by saying, “If taking a break from someone is a b*tch move and makes me nasty, then I don’t give a f*ck.” Wow. Way to sound like a passive-aggressive ex-girlfriend airing her grievances on Facebook, Stassi. Kristen also confirmed that they had a falling out, saying she doesn’t really know why it happened (classic Kristen, she was probably blacked out during the fight). Whatever happened, Kristen, I bet a hundred bucks you were chain smoking and calling someone the c-word when it went down!

In the trailer, we see a very brief snippet of a fight between the women. In it, Katie says that Kristen is being obnoxious. Fair. Kristen says Katie is being a b*tch. Also fair. To be honest, with personalities like that, it’s a miracle any of these people ever have friends.

It looks like some of the cast could be patching things up, though, because Brittany just posted an Insta story of a bunch of them on their way to the People’s Choice Awards, and Kristen was there.

It seems like Stassi may be the last holdout, because she wasn’t with them last night (she was in New York), and she hasn’t posted a picture with Kristen since July.

And is it just me or does that picture appear coerced for the sake of their wine business? Which leads me to my most important question, WHAT WILL HAPPEN TO THE WINE? I need answers, Andy. Mediocre Pinot Grigio is at stake!

Jax And Sandoval Are Also Feuding

Back in August, E! News reported that Jax unfollowed a number of his co-stars, including Sandoval, Ariana, Kristen, and Scheana. This must have happened after his wedding to Brittany, because the Toms were co-best men at the event. So what is up between the old (very old, Jax is 40! Don’t think I’d forget to bring that up) friends?

In the trailer, we see a fight between the two men, with Sandoval screaming, asking if Jax even knows him at all. He’s near tears, with nary a dog in sight to dry them. It’s rough.

According to, once again, E! News, the fight was over Lance Bass (!!!!) officiating Jax and Brittany’s wedding. Apparently Tom and Ariana claimed Jax only picked Lance because he is a celebrity, and for some reason are taking issue with that. Well, first of all, who wouldn’t want a celebrity officiating their wedding? Second of all,  it’s 2019, not 2001, so I think that the word “celebrity” is a little generous for Lance Bass. And third of all, let’s not act like you all aren’t after fame, mmkay. I say they rip off their chunky cardigans, fight it out in a parking lot, and move on.

Since a lot of our OGs are pretty solidly coupled up (except Kristen *insert evil laugh*), it’s up to the new cast members to bring the cheating drama. Based on the preview, it looks like Dayna has drama with Max. He says he’s interested in her, but she seems to think he is exclusively dating someone else. Later in the preview, Max accuses Brett of having feelings for Dayna. Am I getting these people right? If I’m mixing them up, my apologies, but also can Bravo apologize for casting two dudes that look identical? It makes me thankful for the days of Sandoval’s Flock of Seagulls hairdo, because at least he couldn’t be confused with anyone except a time traveler from 1982.

I attempted to do some Instagram digging for you all and get some answers, but Brett exclusively posts pictures of himself in varying states of undress, and Dayna and Max appear to have kept their love lives off the platform. Gotta stay tight-lipped about those storylines to get a contract renewal, I guess!

^^Max and Brett together, so I guess they’re not actually the same person

Scheana Continues To Try To Be The Bachelorette

People write in asking Reality Steve if Scheana is going to be the Bachelorette as often as I tell myself “the diet starts tomorrow.” His answer is always a variation on “Hell no, I just snorted Sprite out of my nostrils in response,” but that’s not for lack of trying. Last season we saw Scheana attempt to recreate her Bachelorette fantasy with human Ken doll Robbie Hayes, which had about as much chemistry as a dog on a date with a lamp. And back in September, Bustle reported that she was getting cozy with DeMario Jackson, although they are both claiming they’re just friends.

Stop trying to make The Bachelorette happen, Scheana, it’s never going to happen! What I don’t understand is that she’s on a reality show now that she gets to be on EVERY season. Why does she desperately want to be on a show with an expiration date? Although, she was basically non-existent in this trailer, so perhaps it is time for her to look for another job…

There Are Way Too Many People On This Show

Okay, so this is less of a prediction and more of a fact, but I feel like Vanderpump Rules season 8 is truly a challenge to the show’s video editors, to see how many people they can squeeze into one credit sequence. So many cast members and yet still no Peter. When will he get his due? Justice for Peter!!

And that’s what’s going to happen on Season 8 based on the trailer, social media, and gossip! You’re welcome for my hard work, and I think we can all agree that if there’s one thing we know for SURE about this upcoming season, it’s that Brittany is my spirit animal.