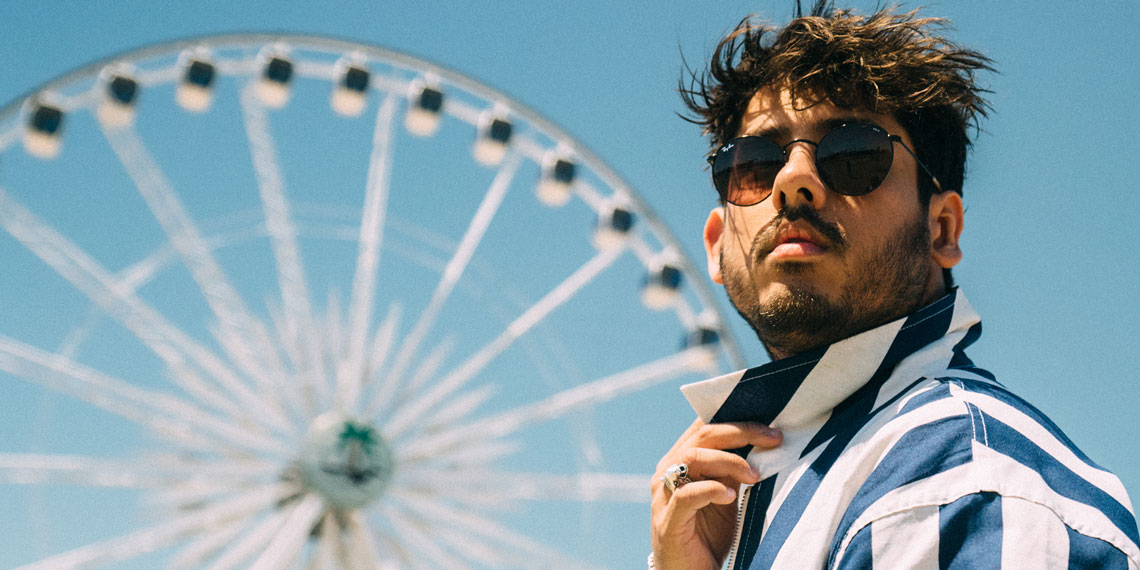 Ookay Talks ‘Thief’, Stealing The Show At Coachella & Why Women Run The World

I’ve conducted a few artist interviews in my day. Most of them are formal—you set up a time to meet in the designated press area at a festival, or (if you’re lucky) you’ll get escorted back to the artist’s trailer or tour bus. You get anywhere from five to 15 minutes, and you’re on the clock while a publicist times you like a hawk. You’re ushered in, you do the interview, maybe snap a few pictures if you have time, and then you’re whisked away just as quickly as you came.

My interview with DJ and producer Ookay (real name Abe Laguna) was not like most interviews. When I caught up with him during weekend one of Coachella, I met him and his almost exclusively female entourage (“my biggest inspirations right now are all women,” he says) inside the rose garden, where we sat down on the grass and sipped rosé and chatted casually. While most interviews are intimidating, with Ookay, I honestly felt like I was talking to a friend. We laughed and joked; I even called him a troll at one point. Despite the 350,000-plus Instagram followers and the fact that his songs have personally put me deep in my feelings (due to one memorable Ezoo experience when I was cracked out and listening to his song “Thief” on repeat until 5am), I felt completely at ease. I didn’t feel like I needed to impress him with well-thought-out questions, and in fact, I learned more about him from the ones that popped up off the cuff. Ookay’s publicist told me in advance that he’s “super light hearted and full of personality,” but even still, I was taken aback by how much that characterization rang true.

It was not most interviews, in part because Ookay is not most artists. The San Diego-born DJ and producer plays drums, trombone, piano, bass, guitar, harmonica, as well as some instruments I’ve never heard of. “The melodica, keytar, SPD, which is like a drumming apparatus,” he ticks off his fingers. I ask how many instruments he can play. “I think 6 now?” he responds, not even completely sure. He credits his musical prowess to his father, a bassist who introduced him to “very complex jazz early on, like, 13 or 12 years old.” He says, “It’s all thanks to my father, I wouldn’t even be here right now if it wasn’t for him.”

And in an age where being a DJ can mean anything from “getting paid to hit play on a premade playlist” to “arranges all their own music,” Ookay sets himself apart from the pack, especially with his live shows. He’s been performing live on the festival circuit for a few years, but revamped the format for Coachella, where he plays multiple instruments and sings. He’s also upped the visuals. “It’s funny,” Ookay remarks, “it’s called dance music but there’s no dancers.” So he added dancers onstage. “Problem number one, fixed.”

It was important to switch up his live set for Coachella because it is a special place for him. (He will also be playing weekend 2 at the Sahara Tent at 2:45pm.) “I had a lot of realizations here, in good ways. The first time I came here , I figured out I want to be an artist that gets to this kind of level to play this kind of festival.”

It feels oddly poetic, then, five years later, he’s taking the stage with this original set format, performing as not simply a DJ, but a bonafide artist. “It’s kind of full circle,” he admits, “very wholesome.” He reflects that every year at Coachella he’s learned something different. This year? “I think it was more of a reflection of how far I’ve come to get to this point,” he decies. “My blood, sweat, and tears, the traveling, being exhausted, working my ass off, being in a warehouse for two months straight… it’s worth it, everything we’ve been going through led to something special.”

He gushes, “And for everyone that I’m involved with—as far as like, my team, and crew, and all of my fans even—it’s awesome to see it just progress and keep going. And a lot of new fans, even just walking around people have been like straight-up, ‘yo, never heard of you before but checked out your set because we walked in and we heard people just like jumping around and it’s awesome to see you doing all this stuff on stage—’”

I shit you not, on cue, our interview is interrupted.

“Are you Ookay?” asks a girl who came up to us with a male friend in tow. I look to Ookay to see how he’s going to handle this.

“I am,” he answers calmly. She visibly starts freaking out.

“I love your songs so much,” she tells him.

He stands up, gives her a hug, takes a picture. The whole interaction is too perfect, and timed too well, to make up. But I can tell this isn’t out of the ordinary for him—not the getting recognized part, but the “being genuinely grateful someone likes his music enough to tell him personally and engaging that person even though he’s clearly busy” part. After making this fan’s day, we sit back down and resume the interview, picking up at what makes Coachella so special to him. Yes, there’s the fact that Ookay credits it as “one of the first festivals I paid for,” but it’s also where he got the inspiration for his breakout hit “Thief,” which boasts over 56 million Spotify streams to date and has been remixed by the likes of Slushii and Flux Pavilion.

He wrote it after that first visit to Indio, where he was inspired to, as he puts it, “make a song that matters in two seconds… something so spectacular that you get excited.”

So that’s how the musical aspect of his smash hit came to be, but the lyrics?

“Oh, it’s definitely about my ex-girlfriend. That’s what most of the big songs are written about.” That’s not a bad claim to fame. “Yeah, well, I’m forever thankful,” he says without a hint of irony. Given just how big the song has gotten, there is plenty to be thankful for.

He credits the success of “Thief” in part to its snappy and immediately recognizable intro, plus the memorable sax riff, but what I suspect most of all, the vulnerable lyrics, which are a breath of fresh air in the realm of dance music. “ the first time I ever put my voice out there like that, one of the first songs I sang/wrote, period.” His approach to writing that song, more or less, went as follows: “I’m going to take what you would consider a journal or a diary and throw it out there.”

As far as other muses, he credits a lot of women. Piggybacking off his comments about his female-led entourage, he says, “I’m a huge fan of what Rezz and Alison Wonderland and what all these women are doing.”

He adds, “it’s really cool to see women set the bar on so much shit. On top of that, the black hole thing that happened was discovered by a woman. It’s amazing. I think most things have been women-driven. We got 10 more years before—”

When, naturally, I ask Ookay where his dating life stands now, he seems surprised by the question.

“It’s nonexistent,” he answers plainly. “I think I’m at the point where if you were like, ‘text a girl right now’, I couldn’t do it.” I clarify: because he has no girls to text? “Pretty much,” he replies with a shrug. Seems surprising for a young musician who’s playing stages like Coachella and Electric Zoo.

“When it happens, it happens,” he answers nonchalantly. “I’m not looking, I’ve been finally single for a year. And I’ve been working hard, so music has been my girlfriend.” He expresses that when he’s ready, he’ll go out there and find someone—or perhaps someone will come to him. He jokes about maybe even finding the love of his life at Coachella. Then he and I in turn joke about doing an interview a few years from now about that. “Who knows,” he guesses. “When I’m married! Or dead—just kidding, hopefully not.”

I inquire if he sees himself ever getting married. He quickly answers no. When I press him on why, he says, “I don’t know. A ring costs a lot of money.” After a pause, he elaborates, “Marriage is interesting, it’s like the weirdest tradition. It’s traditional, you know what I mean? It’s conventional. No one’s like yes, marriage is going to be beneficial”—except for maybe the tax benefits, which launches us into another side tangent about people who get married for healthcare benefits. He sees it often, being from San Diego where there’s a huge military base, where people often rush to get married.

And just like that, I find myself falling into a predictable pattern of jest that I would with my close friends, making a wisecrack about rolling up to a military base to find a boyfriend. Ookay doesn’t think I’m being desperate or weird (or, to put it plainly, that I’m being serious); he gets it, as if we’ve known each other for more than the 15 minutes or so we’ve been sitting on the grass.

All joking aside, he asserts, “I’m focused on my work right now, I’m very happy. I just wrote a song about that actually; it’s called ‘Better Off’,” as in, better off alone.

He doesn’t mean it in an antisocial way, either, but rather, more on the side of self contentment. “I’ve gotten used to dinner with my phone,” he cites as an example.”I really don’t mind being alone. And that’s fine! And I think that’s where I’m at right now, I think right now I’m just like focusing on being the best version of me for someone who comes along, whenever that happens I’m cool with it.”

For now, Ookay is working on his relationship with his music, with an album in sights—his first comically accurately named album, Wow! Cool Album!, came out a little over a year ago. He pledges to return to his roots and make more EDM, because, he explains, “those are the people who gave me the platform to do this ”. After a few shows in Vegas, he’ll take a break from performing, return to the studio, and come back with another new live show. He’d like to do shows in cities that don’t often have electronic artists come through, perform overseas, but above all, stay creative and keep pushing.

He puts it simply: “I’m just going to keep making good music for good people and try to reach an audience.”