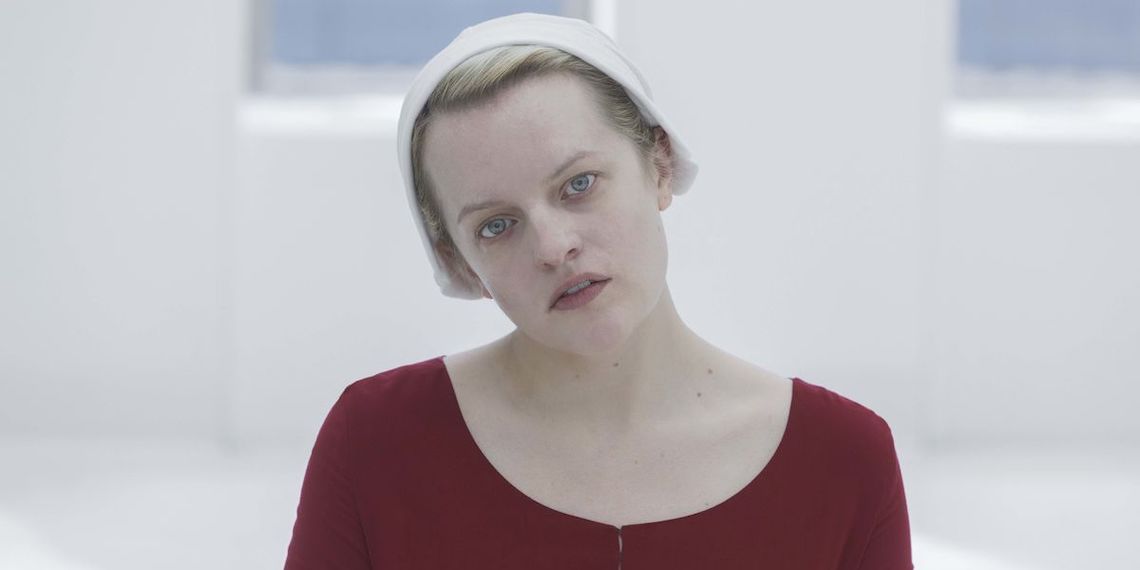 Ooh Heaven Is A Place On Earth: ‘The Handmaid’s Tale’ Recap

After last week’s truly insane ending, I honestly went into this episode with no predictions for what was going to happen, and thank God for that. Right off the bat, the episode changes it up by starting with decades-old pop music and a closeup on June’s face. Quelle suprise! A true subversion! What once was old has been made new again!

Okay, I’m being a bitch. I’ll stop. We start the episode with June attending to OfMatthew in the hospital. OfMatthew is alive, but barely. Her mind isn’t there, but her body is being forced to carry the pregnancy to term. The 11th grader who got a 5 on her AP Lit exam would recognize this as a metaphor for what is is like for all women in Gilead. June is forced to stay and pray for OfMatthew’s baby throughout the pregnancy which—fun twist!—has made her fully insane now.

Side note: Can you imagine waking up from a coma and your bully is just like, standing there singing “Heaven Is a Place on Earth”?

During the day, OfMatthew’s hospital bed is poppin’. It’s the place to be. The wives are there. The other handmaids are there. She’s got an assload of doctors. And these creepy little girls in pink keep walking by. Finally, after all this time, she’s popular!

The next day, all the handmaids gather for their number one handmaid activity, aside from bearing children: a prayer circle. June is so crazy now she can barely pray, and Janine is all f*cked up from the time OfMatthew beat the shit out of her with a can of chowder. Fun times.

Turns out OfMatthew really did Janine dirty and f*cked up her eyeball hole. Not that her eyeball hole was doing great to begin with. Nobody has given her an eyepatch for some reason, so Janine attempts to cover her infected eyeball hole with a chic side bang. Unfortunately, chic side bangs are banned in Gilead, so Lydia makes Janine tuck her hair behind her ear. I think it’s safe to say Janine’s hair does not look sexy pushed back.

The handmaids all leave, but Aunt Lydia hangs back to check in on OfMatthew’s progress. OfMatthew starts having a seizure, probably because she is a half-dead body being forced to carry a pregnancy to term. Idk tho. I’m not a doctor.

June When OfMatthew Has A Seizure/Me When I find Out My Guy Friend’s Wife Has Gone Into Labor: If you’re lucky, you may get to see her sh*t herself.

As we all know, Lydia hates cursing, so she does not appreciate this comment. June then asks Lydia if she can leave the hospital (not very strategic thinking) and Lydia predictably says no.

In the background, we see a doctor dispose of a dirty knife he used to cut OfMatthew’s leg open, and June smiles. Don’t these people realize that if you leave June in a room with a knife she’s 100% going to steal that knife? That’s like, the Handmaid’s Tale version of Checkov’s gun.

June waits until night time to go check out the whole dirty knife situation. She’s changed into her nightgown/slip, which is actually a pretty cute peasant-cut white dress. Pop a flower crown on and it’s honestly a perfect festival lewk (and/or a costume from the movie Midsommar).

June wastes no time sticking her hand in a medical waste deposit box, and gets her finger pricked with a needle. Whatever. She’s not not trying to die. Her medical dumpster diving is interrupted by Janine, who is in the hospital due to an infected eyeball hole. And this, dear readers, is why we wear the eye patch.

Janine, pure as f*ck, comes over to OfMatthew’s bed and forgives her for repeatedly hitting her in the eyeball hole with a can of soup. June, Squidward as f*ck, immediately sh*ts all over Janine’s parade. June is quickly becoming the type of person who tells little kids Santa isn’t real.

June uses Janine’s prayer as an in to suggest she and Janine just go ahead and kill OfMatthew with the extremely tiny knife she’s acquired. Predictably, Janine is not into this idea, like at all.

June then immediately tells Janine to get the f*ck out. Looks like somebody can’t handle a little constructive criticism.

June doesn’t kill OfMatthew after all, but that doesn’t mean she’s done f*cking around with her tiny little knife. Luckily for June, Serena Joy shows up out of nowhere looking extremely knife-able. Unluckily for her, it’s actually hard to kill someone with a tiny knife, especially if you can barely walk because your knees are all f*cked up from praying, so SJ subdues her pretty easily. She doesn’t even freak out that much, because honestly the whole murder attempt was pretty sad, and June ends up injuring herself more in the process. Is June the Bagel Boss guy?

A nice-seeming doctor comes by to sew up June’s hand. Nobody is concerned that she acquired a knife and was going to use it to kill herself and others. Casual reminder that in season one, handmaids got murdered for blinking too sluttily.

June: My mother was a doctor. She treated pregnant women, and she always put her patients—the women—first.

Personally, I love how June is batsh*t crazy for the entire first half of the episode, but then as soon as she has the opportunity to lecture a man about feminism, she is 100% lucid and on top of her sh*t. I feel seen.

Turns out Chill Doctor actually knows June’s mom from back in the day, and they bond over that.

June: You know, last night I was going to kill everybody in here and myself, but now that we’ve chatted I’m feeling a lot better.
Chill Doctor: Oh ya I totally knew that would happen. Don’t worry about it.

That night, June is given a new hospital bed, so I guess stealing a knife and threatening to kill everyone worked. Unfortunately she doesn’t really get to enjoy it, because OfMatthew’s vital signs start going crazy. Is she going into labor? Is she having a miscarriage? It’s hard to tell.

The doctors run in and do a C-section, and pull out OfMatthew’s premature looking baby. So now Handmaid’s Tale has shown us a premature baby C-section and a still birth in two back-to-back episodes. Thank you Handmaid’s Tale!

The next day, June packs up her sh*t and gets ready to go. OfMatthew is still alive, but barely, and everyone says she’s going to die soon. As June is leaving, one of the creepy little girls in pink offers to help her carry her bag. We find out that the little girl is at the hospital because she just found out she can have babies. Turns out all the little girls June has been seeing coming in and out of the hospital are being inspected to see if they can have babies. Bleak. As. F*ck.

June leaves the hospital with Aunt Lydia, but then last minute decides she wants to go back and stay with OfMatthew until the end. Classic June. Always almost leaving places and then deciding at the last minute to go back and be tortured again. I guess it is the least she can do for bullying OfMatthew so badly she lost her mind and committed suicide by cop (it’s a thing, look it up).

Meanwhile, in the next room, Janine’s eye is back to normal. Or at least, it’s back to the status quo. As a nice gesture, Aunt Lydia brings Janine a little red eye patch to wear. Between this and Serena Joy’s leather finger, Gilead has really cornered the market on high-end accessories for female torture victims. A booming industry!

The episode ends with June in OfMatthew’s hospital bed, showering her with compliments, like ya do when you realize you’ve been kind of a bitch to someone. She then promises to free all children, including OfMatthew’s new baby boy, from Gilead. Sure, June. But you’re always saying that.

OfMatthew dies while June sings “Heaven is A Place on Earth.” Not sure if that’s the song I’d personally like to go out to, but okay. In another subversion of the art form, this episode does not end with June looking directly to camera while they play The Jackson Five or some sh*t, but instead ends with only the sounds of OfMatthew’s heart monitor indicating her death. Now I’m kind of wishing we had the old endings back.