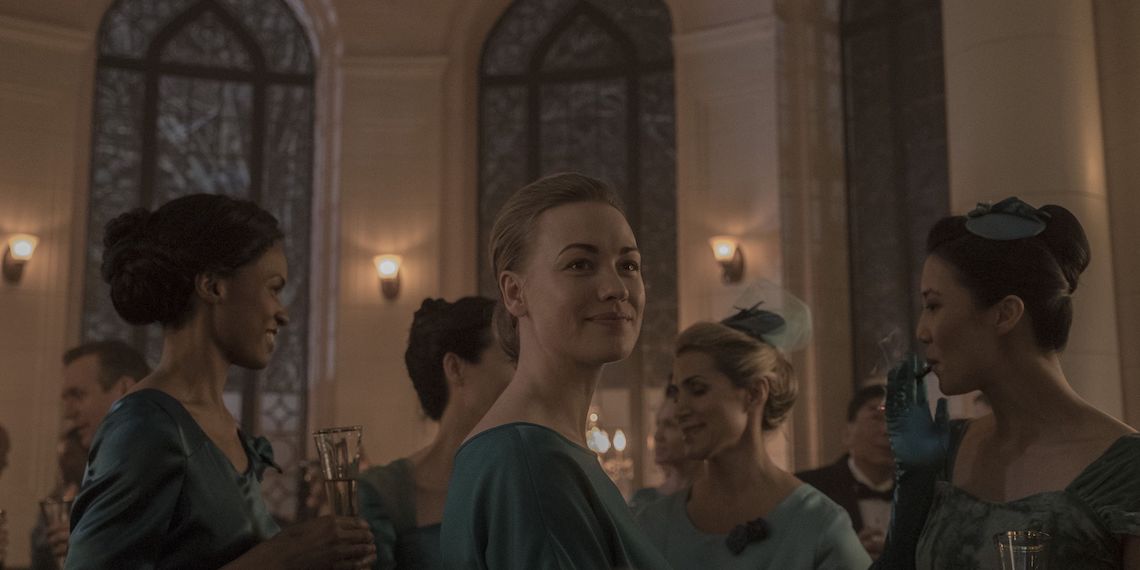 Alright pals, here we go. June is fresh off her field trip to the National Mall which, unlike President Trump’s military parade, was not rained out. I guess God does shine on Gilead after all. We open on…rope. Long rope. Red rope. Scary rope. The handmaids have been assembled for some bizarre ceremonial tug-of-war. Per usual, this is not a normal game of tug-of-war, but rather, a deadly game of tug-of-war. At the end of the handmaids’ ropes are humans ready to be hanged. Honestly, this feels like something they could do fairly easily without the handmaids present but as we all know, Gilead is extra as f*ck.

Once they’re done facilitating the murder of five people, the handmaids head to the grocery store. Despite their friendly seeming moment last episode, OfMatthew is back on her bullsh*t, but now that June knows she is pregnant she can’t be as mean to her. You can’t be mean to a pregnant handmaid in Gilead. You just can’t.

“I heard the woman mistreated a child!” – OfMatthew, justifying how they all just helped kill someone.

At the grocery store, June spies a handmaid rocking a mouth cover and wonders if DC fashions are finally making their way to Boston. Someone call Vogue Gilead!

Praise be for more Emily scenes! May the Lord open on the acting styles of Alexis Bledel, who is being casually questioned by the Swedish government about the time she stole a car and ran a man over with it on purpose. Don’t they realize that was FOREVER ago? They’re also apparently concerned with the whole “stabbing Aunt Lydia five times and leaving her for dead” thing.

The Swedish Ambassador: So you stabbed an old woman and then pushed her down the stairs?
Sylvia: Okay but there’s CONTEXT!

Later at the bar, Moira tries to bond with Emily by remembering the good old days when they were just two happy lesbians in Boston. Unfortunately, Emily is more of a “stay at home with a glass of wine reading Jane Austen” lesbian than a “party all night at Boston’s best gay bars” lesbian, so they don’t have much in common. It’s almost like queer people are not a monolith, or something. Who knew!?!

Moira then invites Emily to “Bird-Dog” the Canadian minister, which is a particularly aggressive form of protesting that is “more in your face.” Ultimately, this turns out to be just them kind of chasing the minister down the street and yelling at him while he tries to get into his car.

Serena and Fred have decided to extend their vacation to the Capitol, and Serena appears to be making fast friends with Mrs. Winslow. Mrs. Winslow seems cool for now, but she is definitely going to do something extremely f*cked up in the future. It’s just a matter of time.

Mrs. W shows Serena a house she could buy if she decides to stay in the District. It’s literally full of the old owners’ belongings, including family photos, half empty wine glasses, and a nursery, but nobody seems to care about that.

Personally, I’ve seen enough American Horror Story to know that this house is absolutely full of ghosts. Like, floor to ceiling spirits up in this bitch. Maybe when Handmaid’s Tale is over they’ll do a spinoff about the Waterfords living in a haunted house? Just a thought…

Meanwhile at work, Fred finds out from Commander Winslow (aka Christopher Meloni aka Stabler from SVU) that it would actually be “more advantageous” to Gilead for Nichole to stay in Canada for now. Turns out Fred’s freaky YouTube videos have been working, and now other countries like Canada are interested in working with Gilead. The power of YouTube, man.

Again, we end on a shot of Commander Winslow’s hand on Fred’s arm for just a little bit too long. Just so we’re all clear, if this is going where we all think it is going and the show tries to pull a “Fred has a #MeToo experience in the workplace that teaches him to respect women,” I might have to tap out of this show.

Okay so I won’t actually do that, but I will be pissed.

Back at Commander Zaddy’s place, June has the following exchange with their Martha, which I loved.

June: Where is Commander Lawrence?
Martha: I don’t know, in some Commander place, doing Commander things?”

June needs to be in Brookline by 3pm to get to Hannah’s school, which I misunderstand as “Brooklyn” and spend the next five minutes being extremely confused as to how June plans to get from Boston to Brooklyn by mid-afternoon. Amtrak doesn’t go that fast, and I highly doubt June has the cash to spring for the Acela Express. Megabus, obviously, is out of the question.

Literally the moment they walk outside it becomes very clear why Lady Z is not allowed in public. In addition to her mysterious condition, she also appears to have a problem with her brain-to-mouth filter. Same, madame. Same.

Ultimately, this whole exchange makes June feel bad about kidnapping a sick person, and comes clean about the real intention of their trip.

It’s always the “crazy” friend that has your back. Never forget it.

Sadly, Mrs. Lawrence isn’t quite able to handle all of the excitement and the whole plan goes to sh*t immediately when the two of them are separated. June is left standing just outside the wall of the school, able to hear Hannah playing but not able to get to her. When she finally finds Mrs. Lawrence again, it looks something like this:

Cut to: Commander Waterford and Serena Joy on a date. He’s feeding her some bullsh*t line about how he’s gonna get Nichole back, even though we all know his boss just told him it would be more politically expedient for Nichole to stay in Canada.

SJ: I was worried some might think it more politically expedient to have Nichole stay in Canada.
Fred: WHAT NO WHO TOLD YOU THAT HAHA THATS CRAZY ANYWAY HOW BOUT ‘DEM YANKEES?

The two follow their date up by attending a fancy D.C. party, where all the wives are wearing their best gowns (aka the exact same thing they always wear but with gloves and a little hat). Serena can clearly see her and Fred staying here. It would look something like this:

Looking forward to another great day in London. ???? #USStateVisit

This scene ends with a classic “everyone parts ways to watch two the lovers dance” scene between Fred and Serena, which I personally found excruciating. They are not even that good at dancing. Call me when they can do this:

Emily and Moira casually go to jail for “bird-dogging” a government official. Whatever. They’ve lived in Gilead so at this point a Canadian jail is probably like a resort to them. Moira is continuing to try to be buddy-buddy with Emily. The results are mixed.

Moira: Crazy we’re in here right? Maybe you and Syl can have after-prison sex?
Emily: I killed a wife. In the colonies. I didn’t have to do it. I poisoned her. I’m not sorry.

We’ll see about that.

The episode ends on another game of tug-of-war, but this time Hannah’s Martha who helped June is up on the block. How did Gilead find out about her? Was it…

Goddamnit! Didn’t I tell you this chick was a narc? And here she is, narc-ing to the highest degree!!!

June when she finds out what OfMatthew has done:

Once again, by season one Gilead rules, June would be killed for this immediately, but by season three rules she’ll probably just get a stern side-eye from Aunt Lydia or something. Truly the saddest part about all of this is that if June had been reading these recaps, she would have known of OfMatthew’s obvious narc-ery, and none of this would have ever happened.