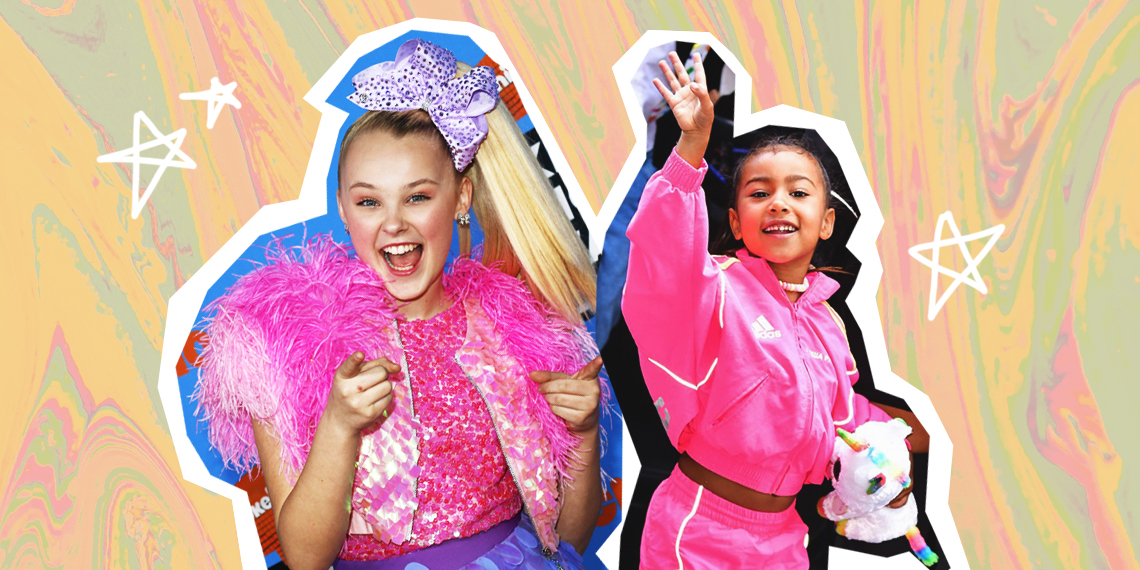 Guys, I have a very pressing matter to discuss, and no, it’s not how I’ll watch Noah Centineo’s new Netflix movie today while at work. I’m going to stream it on my phone, duh. I’m talking about the budding friendship that’s happening between JoJo Siwa and North West because, y’all, I’m alarmed.

For those of you who don’t spend their time IG stalking the famous friendships of celebrity spawn and therefore have no idea what I’m talking about, congratulations. You’re not better than me. For those of you who do know what I’m talking about, then you know that North West, coming off the high of her first magazine cover, recently did a collab with YouTube personality, and the human embodiment of a Limited Too explosion, JoJo Siwa. Well, it was less of a collaboration and more of just JoJo showing North her room, which includes a bedazzled slide and a giant furry sign that reads “JoJo’s Juice,” and me weighing the pros and cons of calling child protective services. I guess the two of them really hit it off though, because North AND her cousin Penelope both attended JoJo’s sweet 16 on Tuesday, and honestly we have a lot of questions.

Before we start speculating as to why a sixteen-year-old would invite a horde of kindergarteners to her birthday party, I think we need to analyze this photo from said party:

First of all, Penelope is looking at the camera like she thinks she’s better than this, and she is right. North, take note. Second of all, why do the girls who don’t even have their grown-up teeth yet look more mature than the one who is turning 16? Hmm? ANSWER ME THAT. Overall, I find this picture very unsettling, and not just because JoJo is dressed like an extra on the set of The Wiggles. On your 16th birthday you should be sneaking cigarettes in a Wawa parking lot, not entertaining six-year-olds! It’s just not right! Like, does anyone else feel like something a little dark is happening behind the scenes here? There were far too many children at that party for an almost-adult to invite, and I was getting some distinct Leaving Neverland vibes from this whole thing.

This became increasingly apparent when I saw a photo of JoJo Siwa with her former cast-mates of Dance Moms. Fun fact: back when JoJo was an actual child, she was one of Abby Lee Miller’s elite dancers on Dance Moms. Post-show, most of those girls have tried to shed their child-star images by testing Instagram’s nudity policy one thirst trap at a time, and I know this because I follow each and every one of them (and am an active member in Chloe’s virtual book club). This is not so for JoJo Siwa! While her friends, who, I remind you, are the same age as her, are literally dressed like Merriam Webster’s definition of “jailbait,” JoJo is posing next to them like their clown-obsessed acquaintance they were forced to hang out with because their moms still think they’re friends.

Holly, you are proving my point for me.

I just sincerely hope that this entire persona was crafted by her mother as a marketing ploy for her to stay relevant. That is the only excuse I’m willing to accept for why she would behave this way, and I’m not just saying that because I’ve been binge watching The Act, and now want to call the police on every overbearing mother I see. I, mean, are we truly to believe that JoJo’s aesthetic is a Lisa Frank wet dream? That instead of trying to guilt her mother into letting her get her belly button pierced like normal girls her age, she’d rather guilt her mother into letting her invite one more five-year-old to her party so they can turn up together on the dance floor? Nah. I’m not buying it.

Also, North, let’s take a page out of P’s book and start evaluating who your true friends are here before I write a VERY strongly worded DM to your mother. You might think it’s cool now to say you have older friends, but when those friends are 16 and still playing with slime, I think it’s time to have a stern conversation with your publicist to see if there are any cooler friends she can dig up for you. And that’s your one piece of free advice from me, kid! The next time, I’m charging.

However alarmed I am by the party itself, I gotta hand it to Little Miss ‘I Wish I Was 13,’ because JoJo Siwa turned that freak show into a lucrative business deal. Footage from the party will air as a Nickelodeon special called JoJo’s Dream Birthday on May 18th. Stay tuned for more updates on my thoughts and feelings, as I will certainly be having more of those as more disturbing footage from this party drops.