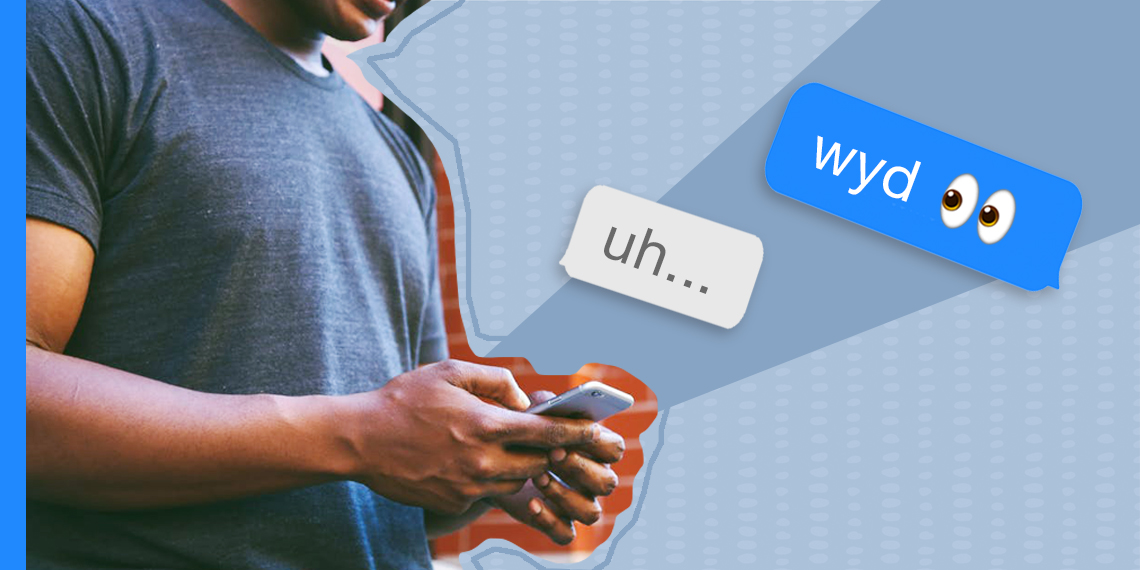 Non-Corny Dating App Openers That Are Better Than ‘Hey’

I’m going to be honest, I was never a dating app user for myself. Although, I did pretend to be a few of my friends on their apps and talk to people for them. From that, I know it’s v stressful trying to find the perfect non-corny dating app opener. When the apps first came around, it was helpful to be female since chivalry is not dead (I think?), and the guy tended to message the girl first. But then Bumble came around and f*cked that all up, so here we are. I asked my friends who are avid dating app users about what they consider to be non-corny dating app openers. Take notes, since a bunch of them are in long-term relationships now.

One of my good friends considered herself a “serial swiper” before she met her current boyfriend on a dating app. What did he say that swept her off her feet? “Hey, how’s it going?” Sometimes simpler is better. A pro tip from her is to not include the person’s name you are messaging. For example, saying “Hey Amanda, how’s it going?” seems a little too forced.

I once got a message on Facebook from a rando saying he “wanted to eat my p*ssy like a sandwich.” I’m sorry, but who would ever think that pickup line would work?! But then one of my friends suggested starting a message with “wanna f*ck” … so she’s still single. Maybe I should set the two of them up. Anyway, people need to remember to only say things on an app that you would say to someone’s face. So keep it classy and not trashy. It’s 2018, we’re respecting women AND men. Try something like, “How was your weekend?” or even, “I want to learn more about you, let’s play two truths and a lie. You go first.”

Someone who is funny is a major turn-on for me. It shows they don’t take themselves too seriously and can have fun. Another friend suggested as an opener, “Do you like Shrek? Cause I’m head ogre heels for you.” This non-corny dating app opener gets the person laughing and the conversation started. But be careful with this one, it can go from 0 to 100 real quick if you don’t use your better judgment and come off as a creeper. Another good option is asking them a question they need to respond to. Try “What are you doing on your ideal Sunday? Working out, sleeping, or bottomless mimosas?” And then if they answer the first option, you can call the authorities. Another one would be to ask them to describe themselves in 3 emojis, that always gets a good response. Stay away from these bad pickup lines that we’ve written about before.

4. Use Their Profile To Your Advantage

Don’t pretend you haven’t stalked their profile extensively and searched their Facebook, Instagram, and Googled them. But don’t make it obvious. They have a dating app profile for a reason. Start the convo off by relating to the cute dog in their photo or their favorite movie they shared in their bio. Make it personal and relatable. By doing this, you get the conversation started right away without the pointless fluff that makes up the majority of the messages sent on these apps. Suggested message: “Hey, is that your dog in your photo or just one you borrowed to increase your matches?” or “I’ve never seen (insert their favorite movie here). Maybe we could watch it sometime.”

So many dating app convos go nowhere since no one takes the initiative to meet up for a legit date rather than just a one-night stand. Stand out from the crowd and use your convo as an opportunity to ask him or her out. TBH this one works best if you both know “of” each other (aka have mutual friends) and aren’t just two strangers because stranger danger is real. But think of something specific and personal. If you know they love a certain band (from your extensive stalking, obvs), and they are playing in your town, ask them if they want to go with you. Another way to ask them out is by first asking them what their perfect date would be and after they respond, ask them if they are free later in the week.

And if you still need more help, check out this list for more non-corny dating app openers.