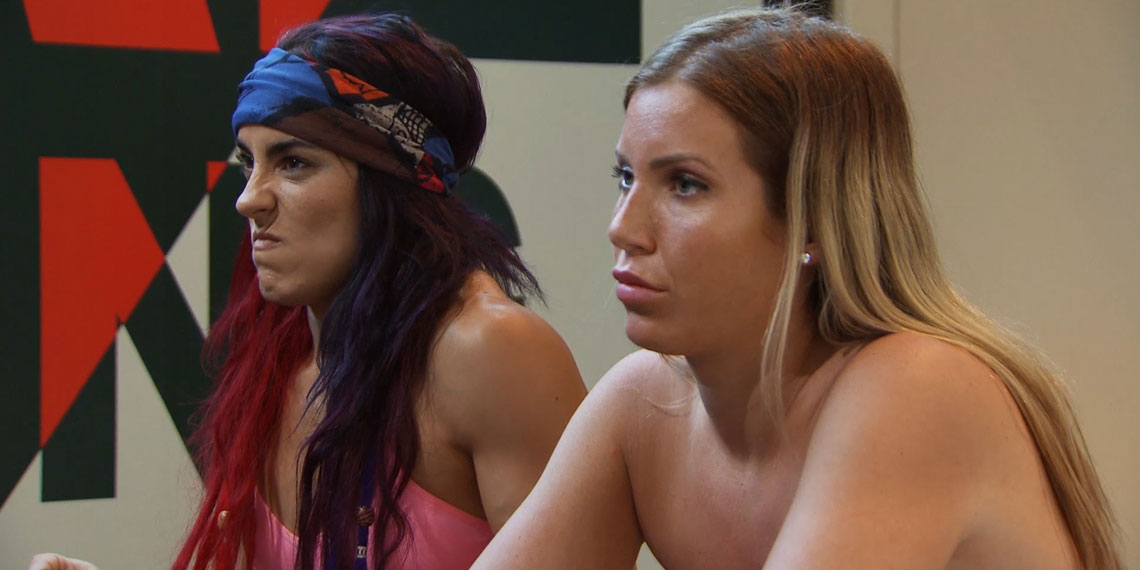 WHAT’S UP, PEOPLE?! My name is Marie, and you may recognize me as a challenger on MTV’s The Challenge. While I haven’t always been a Z-list reality star, I have ALWAYS considered myself a betch. So when I saw my partner Cara Maria interview with my all-time favorite company, Betches, I naturally threw a hissy fit and demanded to collaborate with them too. So, here we are. Below is a recap of episode three of The Challenge: Final Reckoning from MY POV. Enjoy!

We kick off the episode with a “previously on” by Johnny Bananas stating, “Float like a banana, sting like a bee.” I know what you’re thinking… do bananas float? The answer is yes; I Googled it.  We are then reminded that last episode, Tony joined the game as Bananas’ partner, and the Paulie/Cara/Kyle/Faith love triangle is unfortunately gonna be a thing this season.

We begin the episode at the main house where everyone is worried who Kyle/Brad will vote into elimination. Tori tells Derrick she’s embarrassed of him and I feel that. All of my exes are LOSERS too. Kyle tells Paulie it’s a stupid idea to call him a p*ssy this early in the game. Is he foreshadowing we’ll have to deal with him being a p*ssy late in the game too? Also, let me remind everyone that they are fighting over Cara Maria. All of this is stupid.

Shane talking to Amanda about how he’s too extra is literally my life. The reason Shane is worried about Kyle voting for him stems from a drunken Twitter rant Shane made about Kyle’s plastic surgery. For those who missed it, Shane went as far as to change his default to Kyle’s pre-hair plug surgery pic. It was hilarious, and I AM HERE for Shady Shane. Troll on, Shane. TROLL ON!

Upstairs, Natalie and Kam chat about how Kayliegh exposed Natalie’s sexual preference via Twitter. We learn neither Kayleigh nor Natalie feels the need to make up, and Twitter is one hell of an antagonist. Natalie starts to feel the heat Paulie and Cara are causing, and she asks that they squash the drama before her team is sent home for it. I CAN RELATE.

Cara chats with Kyle, and I’m not sure if I’m more annoyed with their conversation, or Cara’s decision to wear her wolf hat during it. Actually, it’s definitely the wolf hat. Can we vote the hat into elimination?

Kyle handles their conversation like an adult and decides to sleep with Faith in an effort to continue pissing Cara off. I want to hate him for being so petty, but I’ve def had conquests solely to make other people jealous, so who am I to call him a “stupid idiot or d*ckhead” like he suggests?

TJ shows up and tells us that this season all the voting is in secret. Secrets can be fun, but usually only when you’re in on them. This is going to be so dramatic. LOL.

Cara and I go into nominations, and I’m reminded of why I hate her. She says I’m terrible at politics, but if you’ve been watching thus far, that seems pretty hypocritical. Luckily, she didn’t take the wolf hat with her here, or else I would have snatched it. After Cara promises to keep our convo private, she immediately heads downstairs and breaks that promise. I realize that’s not a wolf hat, it’s a RAT hat. I just giggled to myself. I wonder if people are finally seeing the Cara I see. Nobody likes a rat. Did I mention I hate Cara?

Sidenote: The bags under my eyes look like they’ve been holding me up all day. Any suggestions on the best filler for this? #askingformyself

Relieved of main house drama, the players at Redemption decide to play a friendly game of truth or dare.

SIDENOTE: You should NEVER play truth or dare with an ex.

Britni turns into Carrie—that crazy serial killer from like the 50’s or whatever—when she’s dealing with her ex Chuck (which is short for Charles if you didn’t know). Everyone calls Britni batsh*t crazy, but TBH I can relate. I would absolutely lose my head if I was stuck with an ex who hated me. It is great TV, though, so #LEAVEBRITNIALONE.

Back at the main house, we catch a heart-to-heart between me and Kam regarding how Cara won’t TALK TO ME LIKE A HUMAN BEING. As I watch, I am literally LOL-ing. Who am I?! Guaranteed Cara will somehow say I’m playing “the victim” after seeing this episode. Well, Cara, I learned from the best.

We get to our first elimination where Paulie and Nat choose to go against Kam and Kayleigh. As I sit her watching Paulie struggle, I feel bad. The guys’ bands were harder to make it more gender neutral. Either way, poor showing. I bet Zach wouldn’t have looked like that.

During the elimination, we are introduced to COACH KAM and I AM LIVING FOR HER. If I worked out, I would totally Shazam whatever song they played during this elimination. Joss graces our screen trying to call Kayleigh stupid and fails… but it only makes him look cuter. The camera loves you, Joss.

#TeamKK pull out the win, and I’m really happy. So happy, that I decide to sing? I’m so annoying. What was that? Kam has the best line in the episode after she beats Panatalie and says, “You wanted it.” I’m both terrified and obsessed with how badass she is.

We end the episode saying bye to Panatalie. Maybe Cara will start being less annoying. But also, highly doubtful. Brad ends the episode with, “You’re gonna see the drama in the house go through the roof moving forward,” and that may be the biggest understatement of the season. Tune in next week to see if Cara washes her hair!