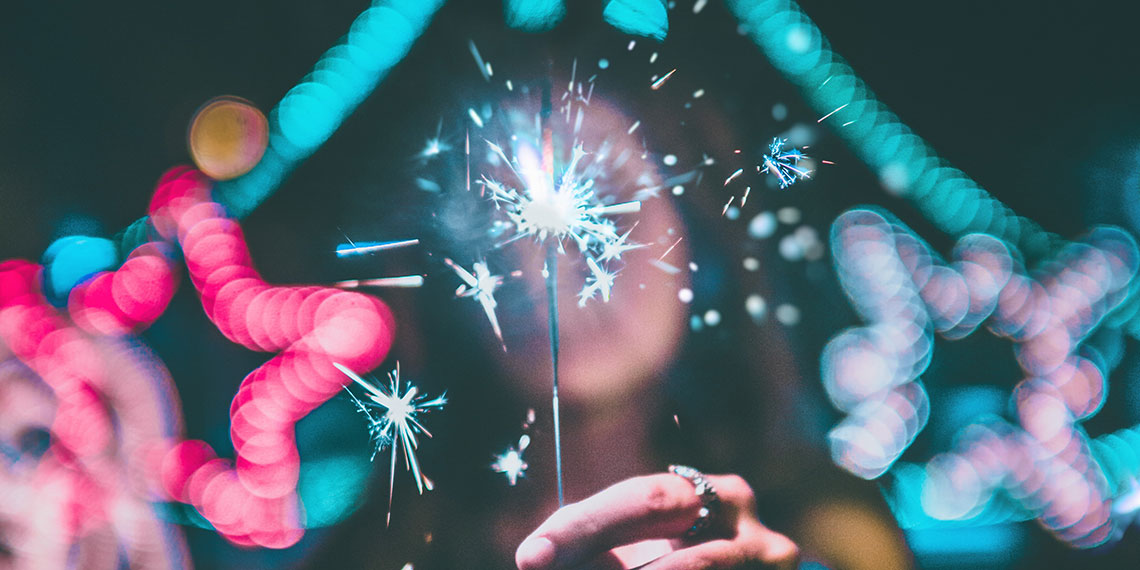 It always starts out the same way: in the days or weeks leading up to December 31, you’re out at happy hour, or sitting at dinner with your family, or in a meeting when you should be brainstorming but got sidetracked. There you are, minding your own business, thinking about anything other than your own inadequacies, and then someone drops it like an unwanted bomb: “What are your guys’ New Year’s Resolutions?” Then you’re forced to improvise some B.S. about wanting to be more proactive, or meal prep more—something easy enough that it doesn’t really hit at your insecurities, and that’s vague enough so nobody can fact-check you on it when you inevitably fail to make any sort of effort to accomplish it come January 1.

And here’s the worst part about it all: the person who brought up the New Year’s Resolutions conversation doesn’t actually give a sh*t about any changes their friends are planning to make in the New Year. They just want to bask in the moment where they share the most dramatic, most thoughtful, most inventive resolution. The one that nobody has considered, because nobody was thinking of this convention before this person decided to spring it on everyone. They want to crush up all the “wow, that’s a good one!”s and “I’m stealing that!”s, lay them out on the table, and inhale them deeply into their nasal cavities and get high off the feeling of superiority once the praise hits their synapses.

So in case you’ve previously pledged to lose three pounds, or learning a new language on Duolingo is already taken by your under-achieving cousin, here are some New Year’s Resolutions ranked by superiority complex.

New Year's Resolution: Do a pull-up*

*Pull up to the bar for happy hour

Promises to “go to the gym” more in the new year are the perfect con, which make them the ideal fake New Year’s Resolution. The key is vagueness. So long as you don’t specify how often you intend to go to the gym, you can sit there smugly as a self-proclaimed fitness guru, even if the only exertion you’re doing is of the mental variety, and all you’re stretching is the definition of the word “more”. You watched IG stories while lying on a mat one time? You “did yoga”. You walked on the treadmill? Start your fitness blog. There’s a reason everyone pledges to finally crack open their gym membership in the new year, and it’s because we are all lying to ourselves and to each other.

The thing is, we would all like to travel more. However, my budget for traveling would allow me to venture to the faraway land of Brooklyn, and I don’t think I’m alone in this. And by “this” I mean “my bank account balance barely supporting an unplanned cup of coffee.” I can’t wait to hear about how you’re planning a trip to Thailand, and I would also love to go somewhere further than a subway ride away, except I could only get to Thailand in a fever dream or if I were somehow able to procure a sugar daddy. Alas, I am not hot enough for the latter, so fever dream it is. Saying you intend to travel more is inherently a little douchey, if only for the implication that you are rich enough to travel more. Unless you’re taking me with you, in which case, let’s f*cking go.

3. Doing Any Sort Of Fad Diet

this year i'm making resolutions i can keep, like gain weight eat more pie and cry a lot

There’s probably a reason so many people’s New Year’s Resolutions have to do with losing weight, and that reason likely has something to do with the fact that we live in a fatphobic society that equates thinness with beauty, working hard, and general worth. In any case, doing keto, or going vegan, or trying intermittent fasting ranks higher on the list of insufferable New Year’s Resolutions because of its longevity factor. Much like CrossFit, voting, and having studied abroad in Barthelona for one semester in 2012, someone who does a fad diet doesn’t just mention it once and nonchalantly move on with their life. They are compelled to bring it up in every subsequent relevant conversation, and many irrelevant conversations, long past the point of anyone remembering they decided to go on the fad diet in question, and far longer past anyone’s point of caring.

2. Go On A Social Media Hiatus

Yes, Facebook is a fear-mongering cesspool. Instagram is bad for your mental health. Twitter is full of Nazis. And still, most of us incessantly refresh these platforms anyway, closing one webpage on our computer and instinctively opening up the same platform in the app version on our phones to drown out the sound of our own thoughts. Pretending like you’re too good for social media is the 2019 version of saying you don’t watch TV, but it’s even more condescending because most of us aren’t checking what’s new on TV every 5 minutes. Not only are you going to have to hear about how this person is too good for Instagram before they take a break, you’re going to have to view their inevitable “going off Instagram!” stories for a week leading up to the sign-off. Then they’re going to slip into every conversation how they “aren’t on social media anymore so they must have missed ”. Then will come the self-congratulation of how much better their life is after they took a week off. And, worst of all, they’ll demand you catch them up on everything they missed while they took their self-imposed break.

We get it. You don’t need alcohol to have fun. You can just “feed off the energy of everyone else.” You miraculously don’t immediately get the urge to take five consecutive tequila shots when you are in the presence of drunk people, and don’t find them annoying as f*ck. In fact, you find them amusing, like a social experiment. Not sure what you’re trying to say about me that I cannot do any of those things, but I did not consent to be confronted with any deep-seated personality issues just because you’re swearing off tequila. Enjoy your padded wallet, increased energy, and improved skin and physique — just don’t say sh*t to me while I lay there dying and hungover on my couch.

My resolution for 2019 is to stop procrastinating

I’m hoping that maybe come 2021, we will all accept that the arbitrary date on a calendar does not have some magical power to change our lives, and stop it with this “new year, new me” bullsh*t. But, if we can’t do that (and given that Instagram influencers build their careers off sentiments like this one), maybe we can just recognize New Year’s Resolutions for what they are: a temporary fix, the instant gratification of self-improvement without having to actually do any of the work.