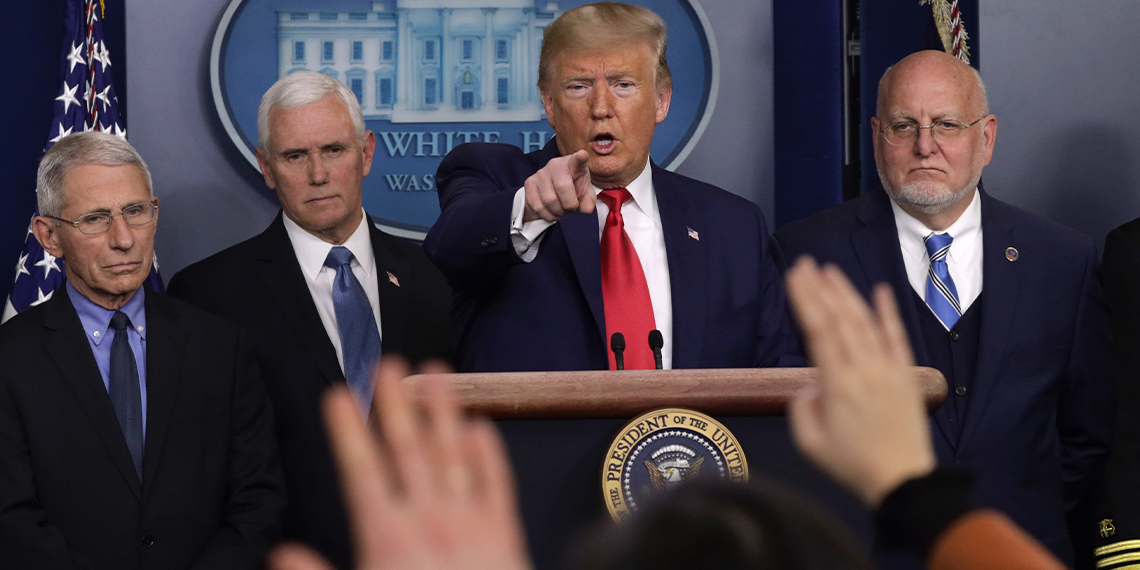 The United States Is Officially In A State Of Emergency

UPDATE,  MARCH 13, 10:30 P.M.: This article has been updated to reflect Google’s correction to claims made that it would roll out a nationwide website to facilitate coronavirus testing. It is only prepared to launch a website for Bay Area patients.

This afternoon, President Donald Trump gathered a large group of people in close proximity, shook numerous hands, and talked into a microphone touched by a dozen people to reassure America he is serious about the coronavirus.

After a series of delusional attempts to keep the virus from entering the United States (it’s here, bruh), the president finally declared a national emergency amid the coronavirus outbreak. This doesn’t make the virus any more or less scary than it was yesterday — it’s mostly a procedural move to allow the government access to $50 billion in funding it can use to implement emergency measures to assist “in our shared fight against this disease,” the president said.

Much of that funding will allow states access to resources they’ll use to implement broader testing, boost up medical facilities, and obtain supplies to deal with an influx of what could be hundreds of thousands of Covid-19 patients. As of Friday, there were 1,920 confirmed cases of coronavirus in the United States, with 41 deaths. But given massive shortages in testing, the number of infected people is likely much, much higher.

Much like Taylor Swift on the 1989 tour, most of Trump’s speech was just him introducing his friends. Speaking from the Rose Garden, President Trump was joined by Mike Pence, Coronavirus Response Coordinator Debora Birx, Health and Human Services Secretary Alex Asar, and CEOs from Target, Walgreens, CVS, and more. Those companies have agreed to help the administration combat the outbreak by setting up drive-through testing facilities in their parking lots.

This is supposed to be the president reassuring Americans about a pandemic, but instead a parade of the nation's largest chains are shilling their wares while spitting into the same microphone. Magnificent.

Tell Me More About This Emergency Declaration

Trump declared the national emergency by invoking the Stafford Act, which allows the federal government to assist states and localities during major disasters or emergencies largely through the Federal Emergency Management Agency.

The move also allows the Department of Health and Human Services to waive certain regulations placed on hospitals and health care providers that will allow them much more flexibility in containing, diagnosing and treating those impacted by the virus (removes certain federal licensing requirements, limits on beds, hospital stays, and remote medicine, etc.)

The president also announced new tests and protocols that will provide hundreds of thousands of tests by next week and 5 million within a month, but he said he “doubts” we’ll need that many.

A doctor told Congress  he estimated up to 150 million Americans could become infected.

Not sure this is the time for glass half-full thinking, Donald.

What Have We Been Doing Up Until Now?

Hospitals around the country had largely obeyed strict testing guidelines provided by the Center for Disease Control. Those guidelines instructed health care providers only to test people who have traveled to a heavily impacted country or who have been in close proximity to someone who has tested positive for the virus.

The problem with that is, we already know the virus has spread throughout communities, meaning someone who’s feeling sick could have come into contact with an infected person without even knowing it. What’s more, the U.S. declined to use the test distributed by the World Health Organization, opting instead to make our own, which resulted in serious delays.

So, Can We Get Tested Now?

Supposedly, yes. During the press conference, the White House Coronavirus Response Coordinator Dr. Deborah Birx and Vice President/Coronavirus Czar Pence announced that Google is working on a new website that will help screen Americans for coronavirus testing.  Basically, you’ll take a questionnaire based on your symptoms and other circumstances and the website will tell you if and where to go get tested.

After the press conference, however, Google’s parent company Alphabet clarified its subsidiary, Verily, plans only to launch a smaller-scale website for California patients. There are no immediate plans to roll out a nationwide website to direct testing, as the president claimed.

Vice President Pence also said that we’ll be expanding drive-thru testing, which has already been implemented in the town of New Rochelle, where NY Governor Cuomo has declared a one-mile containment area. Hospitals in California and Texas have also implemented drive-through testing, which is credited with containing the spread in South Korea.

At drive-through COVID-19 testing centers in South Korea, the test takes 10 minutes at most.

Results are texted to you, usually the next day. And it's free — paid for by the government.https://t.co/JjvQ6lSMm3

When asked by PBS News Hour reporter Yamiche Alcindor if he takes responsibility for the lack of testing, President Trump called it a “nasty question” and said he takes “no responsibility at all.” Makes sense. That’s kind of his motto for everything.

My Q: You said you don’t take responsibility for slow response to coronavirus but your administration disbanded the White House office on pandemics?

President Trump: “That’s a nasty question…When you say me, I didn't do it. We have a group of people [in the administration].”

What About Paid Sick Leave?

Contrary to the president’s belief, he is not exclusively in charge of the government. HBIC of Congress Speaker Nancy Pelosi said today the House of Representatives will pass a bill intended to relieve the economic impact of coronavirus. Pelosi designed the bill in close coordination with the White House — not with Trump, who refuses to speak to her, but with Treasury Secretary Steven Mnuchin.

The bill includes temporary provisions to keep the outbreak from devastating families financially, encourage testing, and mitigate the impact of school closures on students and parents. Yeah. I can imagine nothing worse for the country.

However, moments after the conference ended, Pelosi sent a letter to members of Congress stating she had reached a deal with the administration. The bill includes two weeks guaranteed paid leave in the event one contracts Covid-19, in addition, to leave for increased family leave to care for family members who may be infected or children who are home from school, and a boost in Medicaid funding.

The bill also includes plans to provide lunches for students who rely on school for their meals. Some states and localities had expressed reluctance to close schools given that many kids rely on it for their meals.

Paid leave is key because it allows people who feel sick to — stay with me here — remain at home instead of forcing themselves to work to earn a paycheck they can’t live without. The United States is one of the only developed nations in the world with no federal paid leave requirement. If your salaried job is letting you stay home to minimize the chances anyone gets sick, take this moment to appreciate your privilege while hourly workers are choosing between going to work sick or not having enough food for their families.

The Senate canceled their vacation next week to come to D.C. and vote on the bill (senators — they’re just like us). Given that the White House signaled support for the bill, we’d expect the Republican-controlled Senate to pass it as well.

Now would be a good time to  make sure you’re registered to vote, so you can elect representatives who you trust to manage a global crisis. This will not be the last.

Subscribe to the Betches Sup newsletter for daily updates on coronavirus