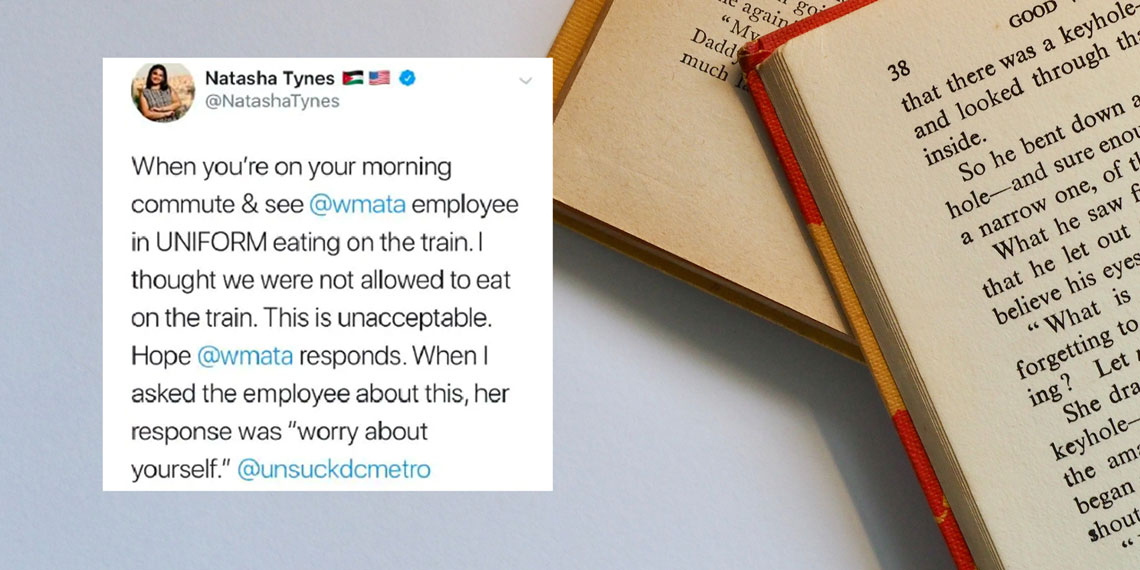 For those of you who only read news with clickbait headlines (hi), you’ve probably read the many absurd stories about author—or shall I say, soon-to-be former author?—Natasha Tynes, who first made the news in the Washington Post. If you haven’t, allow me to fill you in with a quote from The Cut’s take on the story: “Natasha Tynes, a Jordanian-American writer who lost her book deal after publicly shaming a bus operator, is suing her publisher for $13.4 million for causing her ‘extreme emotional distress’,” Yep, you read that right. Honestly, any story that involves a lawsuit for “emotional distress” is going to be good—it’s just a fact. So let’s jump right in to this ongoing saga that makes the publishing world look like reality TV.

Just to summarize the main events of the story, here’s both what happened last month and the fallout that’s unfolding right now in one sentence: Tynes wrote a book with Rare Bird Lit Inc., but said book was pulled after the author tweeted a photo of a black female transit worker eating on the D.C. Metro, calling the behavior “unacceptable.” I mean, there is so much wrong with literally all of that, starting with the fact that, while technically against the rules, eating on public transit is hardly a big deal. I’ve seen New Yorkers on the subway ignore way more serious rules, like blocking all of the doors with their spaceship-sized strollers or jumping over the turnstile instead of paying the MTA.

Here is a screenshot of the offending tweet that caused a sh*t storm. Honestly, I’d love to make a Twitter account just to ask this lady where the transit worker was supposed to eat her breakfast. At her desk in her beautifully decorated corner office? Lol.

So after Tynes sent her tweet, a true sh*t storm was swiftly released unto her. She was accused of being “anti-black,” “entitled,” and a “terrible person.” She ended up deleting the post less than 30 mins later. Good, I guess? She also issued an apology for her “short-lived expression of frustration” and reached out to the whatever the D.C. version of MTA is to make sure the employee who was eating wouldn’t get in trouble. Unfortunately, it was too little, too late because the people of Twitter were already enraged, and the employee in question was “hurt and embarrassed” by being publicly shamed online. Lastly, sh*t hit the fan when Rare Bird Inc. released a statement that basically said Tynes’ tweet was so bad that they didn’t even want to be associated with her, so they pulled her book.

And for those of you who don’t get why this was such a big deal, Tynes’ own ex-publishers summed it up pretty succinctly: “Black women face a constant barrage of this kind of inappropriate behavior directed toward them and a constant policing of their bodies. We think this is unacceptable and have no desire to be involved with anyone who thinks it’s acceptable to jeopardize a person’s safety and employment in this way.”

Tynes, after tweeting about the transit worker eating her breakfast:

But the drama didn’t end there. “Tynes was hospitalized for ‘an acute anxiety reaction and suicidal ideations’,” according to the WaPo. As you can imagine, because it’s 2019 and people suck, Tynes received online threats, and, according to the lawsuit, “she became the subject of racial slurs, including being called a ‘terrorist,’ ‘a plane bomber,’ ‘un-American’ and ‘a radical Muslim,’ while others called for her deportation.” So what did Tynes do? Wait for this nightmare to blow over? Nope. She hit Rare Bird Inc. with a 36-page lawsuit. Ok, so I kind of stopped feeling bad for her at that point.

I didn’t read all 36 pages, because I have a life, but in the lawsuit, Tynes rails against Rare Bird Lit for “Subjecting an immigrant woman of color to this racial torment for own personal profit…  while its imprint publicly lectured ‘that we have to be allies, not oppressors,'” noting that the imprint is an all-white company. Sounds cool, but it completely glosses over the fact that Rare Bird wasn’t the one subjecting Tynes to racial torment—it was the individuals who sent her the threatening messages. And those people didn’t send her those messages because her publisher dropped her—they sent them because Tynes herself went after a transit worker on Twitter. In essence, Tynes is attempting to sue her book publisher for the consequences of her own actions, when it doesn’t seem like the publisher had really anything to do with it.

Also, it remains unclear how Rare Bird would profit from cutting ties with one of their authors, except in a PR sense. This seems to me like a classic case of “entitled lady did something completely ignorant and, instead of offering a genuine apology and learning from her mistake, decided to double down on her actions and then sue.”

The last word so far is from Rare Bird Inc.’s lawyer/mouthpiece David Eisen, who pointed out the most important aspect of this whole thing: the f*cking irony. Eisen said, “It is ironic that, having taken advantage of her First Amendment rights with an ill-advised tweet, Ms. Tynes now seeks to stifle and punish use of those very same rights of a respected book publisher who legitimately expressed its opinions of her conduct, rather than take responsibility for her own actions.” He’s not wrong, except I don’t think either of these people understand how the First Amendment works. For the last time: the First Amendment does not mean you can say whatever you want without consequences from private individuals/companies. It means you cannot get in trouble with the government for saying whatever you want (provided it’s not hate speech, etc).

Also, Rare Bird released a statement on Twitter basically saying this lawsuit is total bullsh*t and Tynes’ book wasn’t sh*t to begin with, anyway. I paraphrase. Here is their actual statement:

So, I don’t know where Tynes got this $13.4 million figure when her book only sold 50 presale copies, and only a few hundred were going to be printed, and it wasn’t even a well-received book to begin with! Whatever ass cavity she pulled this number out of, I want her to represent me in my next salary negotiations. In any case, as an English major, this is the most exciting thing to happen in literature since… like, ever, so I’m living for it.