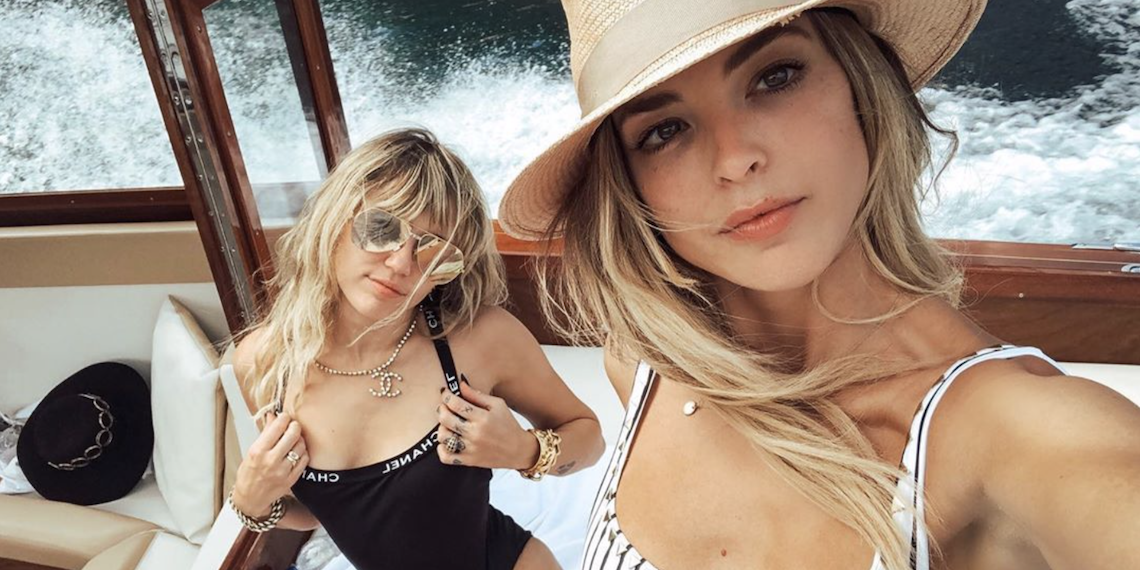 Miley Cyrus Is Still Hooking Up With Kaitlynn Carter

We’ve had enough time now that the initial shock of Miley Cyrus and Liam Hemsworth’s separation has worn off. Some of us might still be feeling a little raw about the situation (hi), but it is what it is. Just like Nelly Furtado said, all good things come to an end, and Miley and Liam are both moving on. Liam has been hanging out in Australia since the breakup news hit the internet, but Miley has been having a hot girl summer across two different continents. Miley and Kaitlynn Carter (Brody Jenner’s ex) are still hanging out, and it sounds like things are getting pretty hot and heavy.

A source told Page Six (you know how much I love an anonymous source) that they saw Miley Cyrus and Kaitlynn Carter at Soho House in West Hollywood last Friday, and that they were showing lots of PDA around the club. The source basically made it sound like they were putting on a show for everyone, saying, “They were obsessed with each other. They couldn’t keep their hands off each other. They were kissing and making out everywhere. In the bathroom, at the bar, in the middle of the floor. They were basically having sex. There’s no question they’re together.”

Whether or not this characterization is fully accurate, I’m kind of obsessed with the wording. Basically, it sounds like Miley and Kaitlynn were reenacting the lyrics to Shaggy’s classic song “It Wasn’t Me.” I’m into it. Sadly, we don’t have any photos of them from the club to confirm or deny this info, but I really wouldn’t be surprised if it’s true. Miley is clearly in a DGAF mood these days, and the and Kaitlynn have been photographed hanging out multiple times since returning from their Italian vacation.

With the Miley Cyrus sighting at Soho House in LA, and Tyler C and Gigi Hadid hanging out at the location in Brooklyn, I’m really starting to wonder if I need to get a Soho House membership just so I can stalk celebrity couples. Soho House has a reputation for being super exclusive and private, but obviously there are some cracks in the system if all of this news is making it into the tabloids. I definitely can’t afford a membership, but if a bunch of us pool our money to sponsor me, I promise I’ll pay you back in tea.

Despite Miley and Kaitlynn being pretty much attached at the hip for the last couple weeks, I still have a hard time believing that they’re in any kind of long-term relationship. I mean, they both JUST got out of marriages, so it’s probably not the time to get a new haircut, let alone enter into a new relationship. They can do whatever they want, but it just seems quick, that’s all. Also, just because they were hooking up all over the place does not mean Miley and Kaitlynn are actually together (as my FWBs tend to gently remind me).

Meanwhile, Brody Jenner is also still hanging out with the barely-an-adult Josie Canseco, who was seen at his band’s first-ever concert over the weekend. I’m struggling to imagine taking Brody Jenner seriously as a musician, but he’s hot enough that I would probably pretend to like his music long enough to sleep with him. As for Liam Hemsworth, he was seen out at a bar in Australia with some friends, but it doesn’t seem like he’s dating anyone new, at least as far as we know.