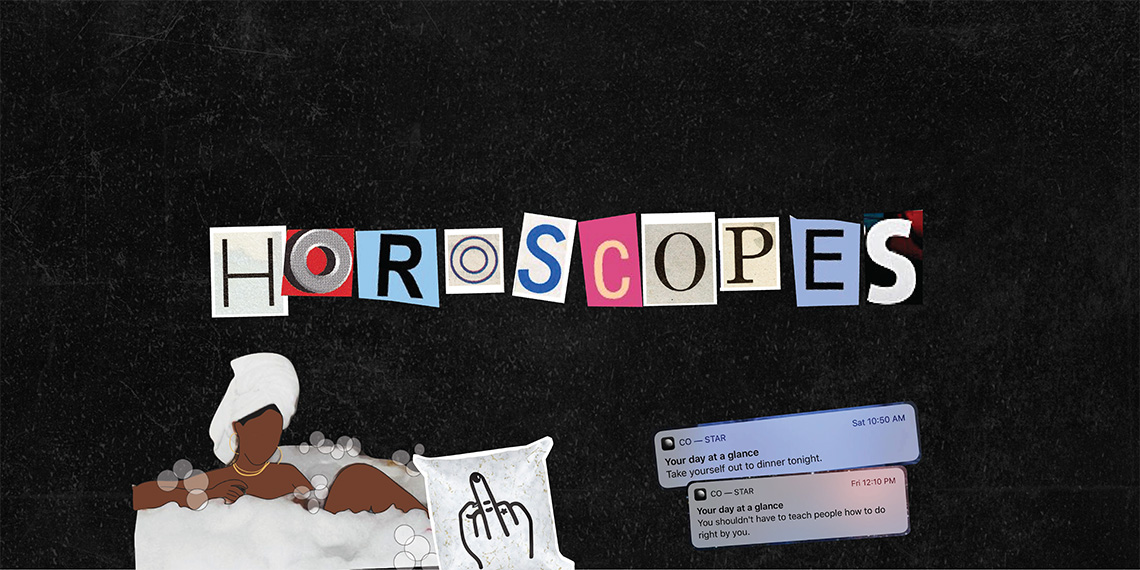 Mars Is A Life-Ruiner. It Ruins Lives: Weekly Horoscopes September 7-11

You’ve heard of Mercury in retrograde, but have you heard of Mars in retrograde? This week, this feisty planet flips it and reverses it for a two-month retrograde. What does that mean? Oh, all kinds of annoying things like lack of motivation, low libido, general frustration, ugly crying, and screaming at your significant other for saying “k” weird. Just blame it on Mars in retrograde. I’m sure they’ll understand.

Slow it the f*ck down, Aries. You’ve been going at warp speed lately, but with your planetary ruler putting it in reverse, that’s a cosmic sign you should take things down a notch. Or twelve. We still have a little time left in summer 2020 (whatever that means), so get that last-minute beach trip in and stock up on frozen margs. No need to get into Back to School mode just yet, no matter what the “calendar” may say.

You’ve had your eyes looking forward for the past few months, but now it’s time to turn your third eye inward. Those painful feelings you’ve been avoiding dealing with? Deal with them now, or they’ll deal with you. Usually at an inappropriate time like during your morning Zoom meeting, or at your first actual date in six months.

You’re gonna wanna hit save an extra 2-300 times this week, Gemini. With Mars retrograding in your technology-focused 11th house, typos, texting mishaps, and bad email etiquette abound. Be extra careful with sensitive communications (aka shady Slacks) until the danger passes. Then resume sh*t talking with abandon, as usual.

Retrograde Mars is making you feel like you might bite the heads off of everyone, so it’s important to remind yourself to chill. Maybe your roommate truly has been breathing extra-loud lately, but now is probably not the best time to bring it up. If you still feel that way when Mars is back in regular motion, you can ask them to take their huffing and puffing down a peg (also maybe suggest they take a COVID test).

Forward motion feeling like it came to a sudden halt? You can thank Mars’ retrograde ass for that. The next few weeks you might notice the pace of your life come way, way down. You may find it harder to get motivated, and once you are motivated you might find it harder not to just say f*ck it and start watching Million Dollar Beach House. Instead of fighting it or giving up completely, split the difference and do your work *while* watching Million Dollar Beach House.

Sorry to anyone who may be relying on you for their sexual encounters this pandemic, because this week, you are just not feeling it. While Mars in its normal state had you insta-stalking any marginally attractive person who looked your way, Mars in retrograde has you seriously considering a life of celibacy. Being a nun worked for that chick in The Sound of Music! Until it didn’t…

Your relationships are up for their quarterly review! Who is getting promoted, and who is being let go? Chances are quarantine has shown you which members of your crew are providing essential services, and who can be closed down until further notice. Make some tough decisions now so you don’t have a wedding photo crowded with people you barely talk to later.

Work smarter, not harder, Scorpio! Retrograde Mars has you rethinking your routines and realizing that some of the sh*t you’re doing is a waste of time. Like, what is the point of waking up at 6am every morning if you’re just gonna stare at the ceiling for an hour? Set the alarm for 7 (aka when you really get out of bed) and stop kidding yourself.

You’re another sign who just got hit with a libido torpedo courtesy of retrograde Mars this week, archer. Embrace it. All the energy you were using trying to make pandemic dating happen can be put to other pursuits, like actually reading a book or finding a vaccine. You were using a *lot* of brainpower on dating, after all.

Mars in retrograde has you shifting focus to what really matters: family. Have you been calling grandma regularly? Answering texts from mom? Letting dad tell you all about his new home improvement project (which he actually already told you about yesterday)? Now is the time. Remember, these people have literally wiped your ass before. You kinda owe them.

Remember in high school when you kept getting in trouble for “problems with authority”? Yeah… you’ve still got them. With Mars in retrograde you’ll be particularly sensitive to anyone telling you what to do. But gentle reminder: your boss is allowed to do that. Be careful not to buck authority so much you find yourself out of a job. You kinda need that to survive.

Keep your mind on your money and your money on your mind this week, as Mars in retrograde means you might incur some unforeseen expenses. Be sure to put a little money aside in a rainy day fund. If the first nine months of 2020 are any indication, you’ll probably need one for the zombie apocalypse/sharknado/asteroid to come.