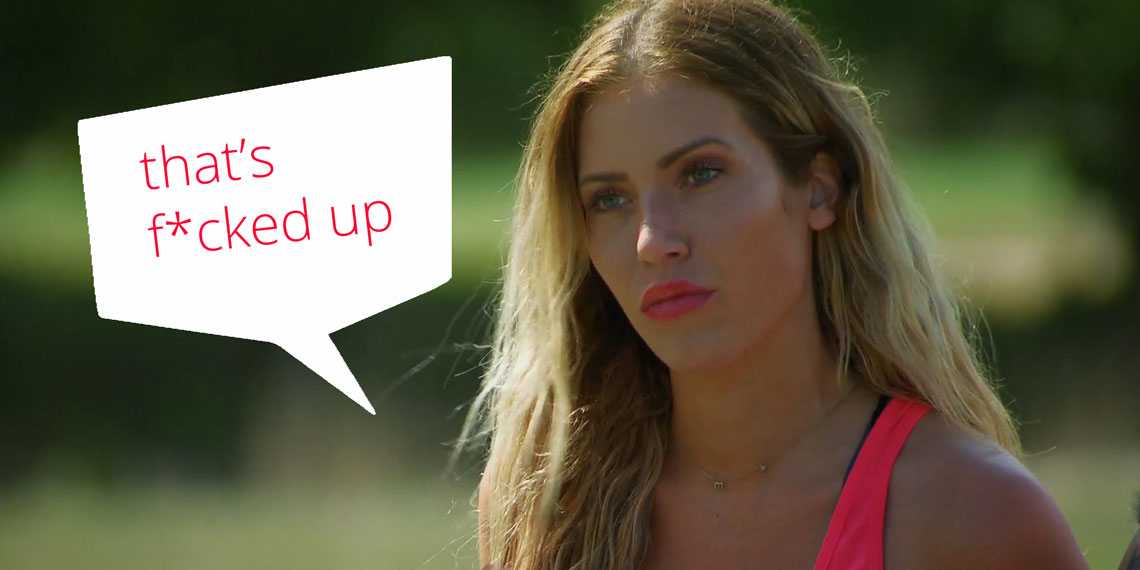 This week my birthday month celebrations finally caught up with me and I’ve been sick all week. I wasn’t planning on writing a recap for last night’s episode until I woke up this morning and saw that both Cara and Paulie, two people who may be biased in their recaps, wrote one… and I’m not letting Shane go down like that. I loved this episode, maybe because I love Shane, maybe because I love pettiness…. either way, here’s MY recap of The Challenge: Final Reckoning episode 8!

We begin the episode where we left off in Armageddon, where team bad girls, and everyone else, was blindsided by TJ’s twist of mercenaries. This season, mercenaries don’t just take you out of the game, they take your place. Pan to me saying “That’s f*cked up,” and that’s exactly how I feel. The teams had to punch themselves through walls in order to win the elimination, and unfortunately Faith couldn’t pull it off. That being said, Angela broke those walls down like they were cardboard, and I’m sad we won’t get to see her perform fully…. or will we? Before leaving, Angela tells the camera that Kam and Kayleigh “need to fix their wig, and their nose.” I CAN’T WAIT FOR THIS REUNION. Ashley/Hunter join the game and everyone is ecstatic… except, of course, Johnny and myself/Cara. With Ashley in the house, we fall lower on the totem pole of who I considered my allies. Ashley’s hella fun, though—so I’m still not THAT upset.

While Ashley and Hunter move into the main house, we are made aware that Kyle (with his newest boo sent to redemption) now has his eyes on SmAshley. Ashley looks HELLA good this season, so can we blame him? Last week Cara told Faith it was a bad idea as a “rookie” to come after a man who’s had previous relations with someone in the house—I wonder if her feelings are different now that Kyle has his eyes on Ash, a VET, and former CHAMPION in the house. The answer is no, because Cara is a hypocrite. The boys take bets on how long it will take Kyle to get Ashley in bed… I wonder who won with a <24 hours bet… cause that would’ve been mine. What kind of girl would get with a guy night one??? OH right, ME, last season on vendettas, when I drunkenly chalked Kyle before Cara could get her claws in him. I feel you Smash—and in the name of women empowerment… you get yours HONEY! Ash realizes quickly it may not have been the best idea to swap booty with Captain Kyle and quickly decides to keep it a “secret”, even from her partner Hunter. Hunter is worried that Ashley may be…. well typical Ashley… and start stirring some unnecessary drama early in the game. Hunter may be smarter than he looks… maybe.

The sun rises, and Shady Shane thinks it’s a good idea to apologize to Davonne for calling her a b*tch. Davonne is a smart girl, a very very smart girl, but it doesn’t take a genius to figure out that Shane’s motives to apologize may not be genuine. Davonne calls bullsh*t in her interview, while Shane explains he’s trying to confuse her into thinking they’re friends. They agree to start fresh, but Davonne lets us know that it’s one strike with her and you’re out. She’s playing Shane in this conversation as much as Shane thinks he’s playing her. It’s clear this new vendetta, even with an “apologetic” Shane, is still very much real.

P.S. How gorgeous is Day? All of her interviews get me so HYPE. She is ferocious and the kind of woman this show needs.
P.P.S. We also need Shane, because who doesn’t love a mean queen? #PETTYLIVESMATTER

We finally get a day out at the winery, and it’s obvious where the cliques stand… or sit (as we are at a picnic). We start with an interview from Ashley reminding us Joss is “god’s gift to women” and we cut to what might be the hottest reel of a guy coming out of the water ever. Joss, we love you!

During the outing Johnny lets the world know that his days are numbered. With so many new faces on the show, everyone’s coming for the number one spot, and currently that lies with Cara and Johnny as the faces of the challenge. Cara tells Johnny the lavender ladies “think they’re famous” and I just threw my amoxicillin at the TV. Cara makes me sick sometimes, and apparently still makes me sick, because now I lost my medicine. On the way home Shane tries to tell Cara why people hate her and while it doesn’t show it, I did stick up for her. While I agree with everything Shane is saying, she’s still my partner. I can’t stick up for her too much, however, because if the lavender ladies hate me, #TEAMCARAMARIE are done in this game. Back at the house, my wonderful partner Cara tells Johnny about the bus ride, even dropping my name as to someone who addressed her, even after I stuck up for her (typical). This is where perhaps my favorite challenge scene EVER begins.

Johnny decides to call Shane over to address his recent dragging of Cara, and here comes the FIREWORKS… or maybe it’s the laser beams LOL. Johnny tells Shane he loves him to death (eye roll) and that he needs to stop. Even Tony, his partner, recognizes how much of a d*ck John can be. Johnny tells Shane to put his helmet on so maybe he can grow some confidence. Cue hero music, Shane requests his helmet and lets Johnny know that he is a narcissistic sociopath. Johnny, not knowing the definition of either word Shane used to describe him, thinks Shane is calling him self-conscious. I have now replayed this scene 10 times, and every time I do, it doesn’t get less funny. Whether you love or hate Shane, you can’t deny you had a good laugh with this argument.

Back at Redemption, TJ shows up to share surveillance with the currently eliminated teams. This time, the footage shows Ashley and Kyle getting down and dirty and Faith is upset. Veronica speaks for all of us when she says “are we really that shocked”?

Cut to a team convo with team bad girls, and Angela is being a great friend/partner helping Faith understand how much of a dirty pirate Kyle really is. I hope and pray team bad girls get back into the main house, because there is nothing scarier than a woman scorned, or in Kyle’s case… two women scorned.

We get to the daily challenge, where TJ tells us we will be playing a good old fashioned game of rugby, in two teams. Whichever team wins the challenge will have the task of nominating an MVP whom will win the power vote. Since Kam/Kayleigh won the last challenge, they had the opportunity to chose which team they’d like to join. What isn’t explained is that only same-gendered players can tackle each other. With Kam/Kay choosing to the orange team, this automatically gives us a HUGE advantage as the yellow team only has two females and we have six. Let’s not forget the GIGANTIC dudes the orange team has as well with Kyle, Brad, Tony, Zach, and Hunter all rocking with us. This leaves the yellow team consisting of Shane, Nelson, Davonne, Jozea, Johnny, Tony, and Joss and Sylvia. With the winning team getting the coveted opportunity to vote MVP, it doesn’t look great for Shane and Nelson since two of the four teams literally loathe him. Shane realizes this early, and in a hilarious interview between him and his partner Nelson, he lets Nelson know that they cannot win today’s challenge. TBH they weren’t going to win anyway…. but that’s not what makes this so hilarious.

We kick off the challenge and with ease. The orange team grabs the first win (out of a best of three scenario). While it wasn’t necessary for Shane to make it so obvious that he was throwing the challenge… you gotta love him for it. The quick shots of him prancing/sitting down on the field are enough to make any petty lover happy. As predicted, the orange team wins, but not before Jozea realizes Shane’s plan. The yellow team is PISSED and we get some hilarious bickering between Jozea and Shane. I love Shane so much, but I really do hope Jozea “wears his Louis to the reunion” and stomps on Shane’s head. Is anyone else super excited for this reunion? Shane mentions Jozea’s songs suck, but admittedly says in his interview he doesn’t like Jozea, so he’s gonna say whatever he can to piss him off. While I am #TeamShane … for now …. Jozea’s song really is fire and I suggest you all give it a listen here.

Next week’s preview shows me crying because “I can’t trust my friends.”  I honestly can’t remember why I’m upset, but regardless, A sad/mad Marie is not one you want to miss. Perhaps it’s time to switch alliances????? This season is just starting to heat up… and I cannot wait for the world to meet MARNIE (my crazy alter ego who gives zero f*cks)

SEE YOU NEXT WEEK!! Let me know what you thought of Shane’s plan in the comments!!