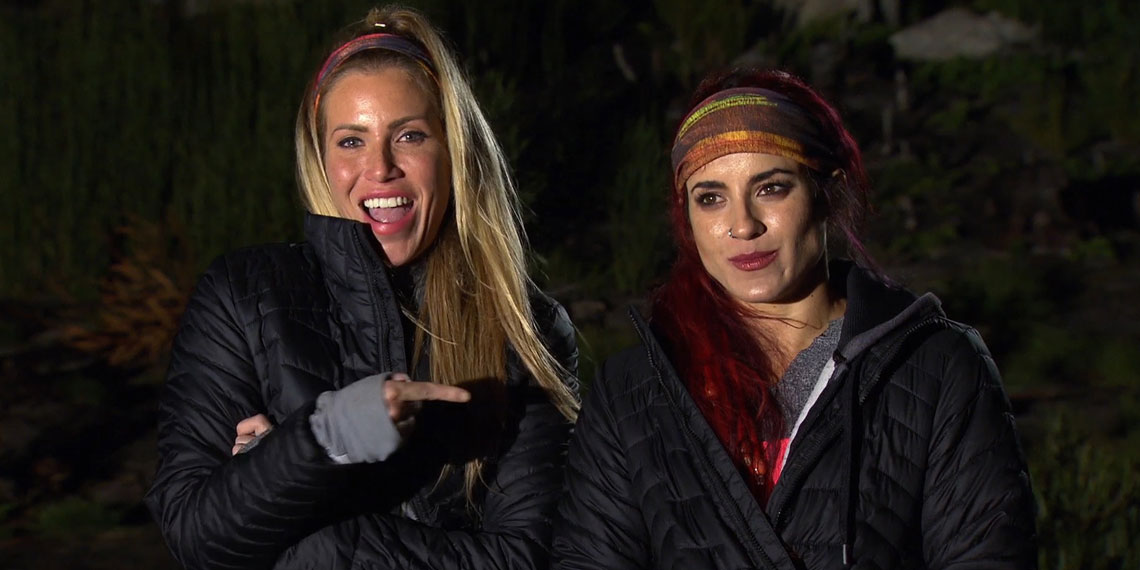 If you really need me to recap last week’s episode, I feel weird that you’re reading this. In tonight’s previously on, I reminded Sylvia not to touch me and Shane that I am PETTY. Tonight, Nelson reminded us that “We’re living in the twenty eighteen century, PEOPLE!” and in this century, or episode I should say, equalizers for different gendered teams don’t exist. Let’s all say a quick prayer for Natalie’s chin. We kick off in Armageddon, where Shane tells TJ that we’re friends and he’s going to blast all of my sh*t on Twitter. I meant it then, and I mean it now, I’m really good with words. (Ahem, see all my other recaps.) Shane loses 3 cool points for a lame-ass comeback, and I’ve decided giving and subtracting cool points (cp) will be a thing throughout the remainder of this recap. 100 points to me and 50 points to you if you follow me on Twitter @Marie_TBD 😉

TJ informs us that this is elimination is named “meet me halfway” and I immediately think of Fergie. Wow I miss that song. Throwing that back into rotation immediately. The maze consists of dry walls, plastic wrap walls, and cardboard walls. So for those of you who think Nelson took that first door down in one punch… I did too.

ShaNelly continue to make us all uncomfortable with their could-be romance and I’m actually here for it. As much as I try to hate Nelson, he really is a sweet baby cake angel and he and Shane are hilarious to watch together. Cara and I lose (insert funny feminist excuse here) and I look like I just got a facial from a smurf. “It will look cool” they said. F*ck off.

At Redemption, Zach and Amanda have a team chat and it goes as well as expected: not well at all. Amanda shows signs of a potential willingness to work with her partner and Zach shows signs that he would like his flight home booked to JennaFK instead of Michigan. Not looking good for team #Shouldabeen. Later that night, the party arrives when Cara and I walk into the house. I do a beeline to the fridge and grab a beer while Cara catches everyone up on what happened. As I cheers Kam, we exchange a “we actually didn’t have to exchange this look to know, but I know” look and Kam gets 30 points for being a real one. #GIRLPOWER

Kyle tells Cara and I that we shouldn’t pick Kam and Kayleigh because they aren’t on “our” team. Well Kyle, Kam and Kayleigh picked YOU to save during Kam’s “Master Plan,” and you picked US to throw your challenge disadvantage to. There’s no “I” in TEAM, but neither is there a “U.” Boy, bye. Cara and I decide to tell Kamleigh because who doesn’t want to see Kyle caught and I LOVE GOSSIP. He’s been getting away all season with the lies and we’re over it. TJ lets us know that 4 teams will be competing tonight and something about a horseman apocalypse. Kam and Brad pick the double cross and they’ve got a golden ticket to potentially stay right there in Redemption because even if they lose they’re just coming back here. I know you’re rolling your eyes, but you’ll be happy Redemption is there moving forward.

We see an argument erupt between Kam/Kay and Brad/Kyle because the ladies decide to catch Kyle in the act. Kyle denies ever saying it and I shut him down with the truth paired with a huge assist from production with some footage evidence. You’re corny, Kyle. Fortunately for Kyle, the unfavorable light we are seeing him in is forgotten as Brad makes his entrance into the fight. Kay tells Brad he has nothing to do with the situation and Brad tells her to wipe her chin. I look around to see if it’s socially appropriate to laugh. I’m alone. It is. Prior to tonight, I’ve never heard someone talk about “ass licking” and it turn me off. I’m highly uncomfortable and uncontrollably laughing at the same time as I read Brad’s subtitles. “I can only watch someone shit out of their mouths so many times before I gotta give them some toilet paper.” ZEAD.

Seriously though, is Brad copyrighting someone’s joke? Can he really be delivering such TV gold on the spot like this? Well people, If TJ can FaceTime the cast, Brad can be that hilarious because… WE’RE LIVING IN THE TWENTY EIGHTEEN CENTURY! 2 points to Nelson because I think that’s all he can count to.

At Armageddon, the Doctor lets Zach know he can no longer compete, and I’m not buying it. Amanda and Zach say goodbye and Sylvia is excited about about spending alone time with Joss. So much so that her outfit is unravelling itself during her interview. Kam and Kay eventually chose Cara and I, while Kyle choses his new bestie Paulie. Weak AF. I tell Cara that I want to go inside the ball after a good 3 times of changing my mind. It’s hard to be confident about a decision when you have Cara as your partner. Every 2 seconds, “are you sure?”

Anyway—I WIN to the surprise of most viewers as well as Janice @ BMP who is still trying to provide evidence to MTV that I cheated. I heard she hasn’t left her house since I won Tuesday night. I also heard that she hardly leaves her house any night because that’s what haters do. #staywoke I’m back, betches!!!

It’s ROUND 2 and we see what I can only describe as human torture. I would imagine if someone spun a baby hamster like that in front of a group of people they would be extremely offended. Totally fine to do it to a petite woman on national television, though! I remember the hardest part about the elimination was remembering the numbered balls you already put in and Natalie was no different. She had about 5 balls, all numbered 88. We started screaming out the numbers she was missing as she lost a little of her life every time the bingo ball rolled. Who comes up with this sh*t?

Somehow, someway Natalie gets all her balls before Brad and just like that #PaNatalie are back in the game!! The LL’s and TYB’s are not amused and I love it. Johnny just got some road dogs back that he can shield himself with against the mean girls and the game has changed just like that. The only thing that hasn’t changed, is that one of my personalities is named Regina. Emoji devil face.

P.S. Spread the word! Let the people know who might have gave up after the first 10 episodes that the last 10 episodes have been epic. K? Thanks. Bye.