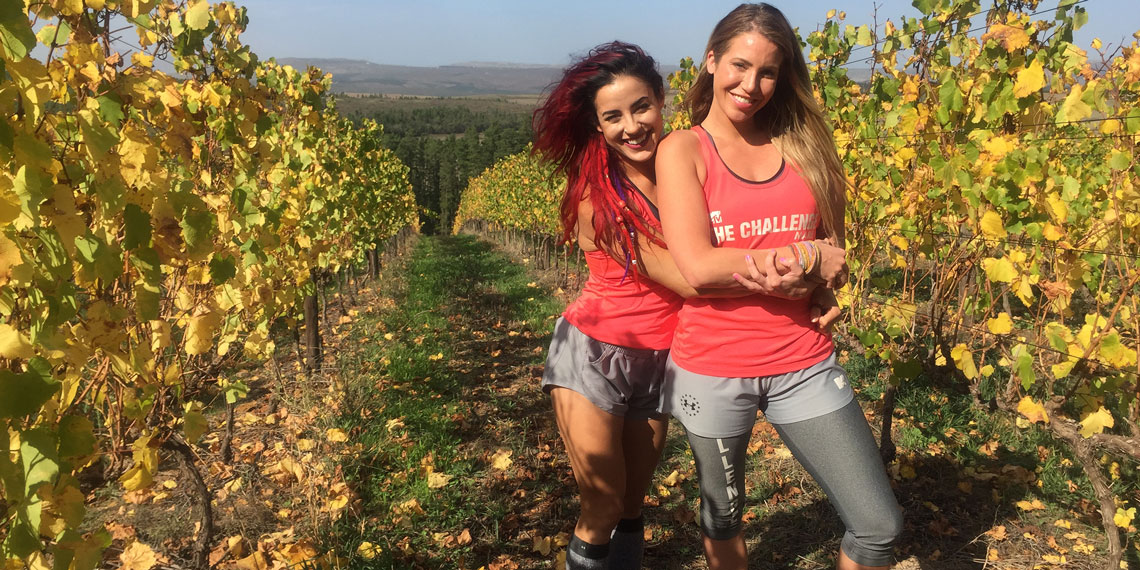 In last night’s episode I made the final. I REPEAT, in last night’s episode, I MADE THE FINAL. Haters will say Cara carried me, and betches like me won’t care. WE MADE IT! There was a lot of missing information last night, and I’m here to answer all your questions. Well hopefully… I lost my laptop, drank four cups of coffee, and I’m currently writing this recap on my cell phone. This is how serious I am about the juice I’m about to share. When there’s a will, there’s a way.

We start off hot this episode, walking directly into a daily challenge. TJ tells us this season will have another Trivia, and being electrocuted will be the punishment of receiving an X, whether through your own wrong answer or the power one gets if they answer correctly. I’m ecstatic and I hope the viewers are too. Any challenge that keeps me grounded and removes physical endurance is right up my alley. I will get electrocuted all day every day over running a mile.

We start trivia off with a wrong answer by team #PaNatalie. When asked what a baker’s dozen was they answered “6.” As a bakery connoisseur myself, I was personally offended by the answer. I also believe all bakeries need to up their “baker’s dozen” with a surprise +2. Just saying.  Everyone loves surprises.

Ashley and Hunter get the answer correct to “what female artist has sold the most records” with “Madonna” and I’m not surprised. I can see Hunter dancing around in his briefs to “Material Girl” easily, of course he’d know. I was surprised however, that Ashley and Hunter threw their X at me and Cara. Getting electrocuted hurts. Don’t let my smile fool you. It’s what I do when I’m nervous, I smile. Smiling out of turn actually got me kicked off of my soccer team once. True story. Can’t help it.

Cara and I have a decent run with our trivia questions thanks to my brain, which is lightyears above kindergarteners’. Almost nailed it, Ri. Almost. TJ throws out a few trick questions before stumping me and Cara with “what side of the road do Canadians drive on?” We were truly confident this was a trick question. It’s not like there weren’t a few before and after. Naturally, overthinking killed my brain cells and we inevitably end up losing as other teams send us through the electric curtains like it’s showtime. Joke’s on them, it’s always showtime for #caramarie.

Other quick things to note in trivia: Ashley is hilarious. Hate her or love her, she’s TV gold. She and Hunter are a disaster waiting to happen. Sidenote, she’s pretty smart too. Never underestimate Smash’s mind. Never.

Paulie has become my favorite character as a viewer. After myself, of course. I can’t even explain it, and perhaps I’m just reluctant to give him the full credit he deserves… but I’m rooting for him as a fan. As a challenger, ERRR… stay tuned for next week. LOL Joss and Sylvia win another daily, and #PaNatalie have identified themselves as a true floater.

We went out later that night against my will. I remember not feeling well and having a PA ask why. I don’t know, maybe because you electrocuted me today!!? Talk about one pissed off electrocuted woman. Poor girl… and then I wonder why I get the edit I do.

Anyway, this is where a plan was hatched between Sylvia, Ashley, and myself to get an elimination between Banony and Panatalie. We knew they were the teams to beat, so first let them beat each other. It was a shot in the dark, but it went down flawlessly, and production decided not to show it. Ahem.

Joss and Sylvia are safe. This means the remaining teams have three different options as to where to place their vote.

Considering our history, and the high stakes of the elimination, we devised a plan that would hopefully leave Panatalie and Banony with only 2 reasonable options instead of 3.

Taking note from Kam’s plan, Sylvia, Ashley, and I devised one ourselves to make everyone else think the LL’s were voting for me and Cara. This was done by both staging a loud argument back at the house, and convincing everyone else that they were going to band together against me and Cara, like they had done in the past with John. Convincing everyone included our own partners. I had a hearty laugh when they made it seem like TYB had any role in this. Typical.

The scene with Natalie, Cara, and me was all part of the plan. I needed to convince Natalie that the votes were going our way. That crying session was totally fake. Any person watching it should be able to tell. You know a real Marie cry when you see one. I promise. #dramatic We were never on Natalie’s radar, although they’d like to make you think so. Capitalizing on the fact that everyone truly believed we were going in, I told Johnny that our vote was going to Ashley and Hunter. Ashley, Sylvia, and I knew Joss and Sylvia would put their vote on Banony.

What this means for BaNony:

What this means for PaNatalie: know they will not vote us in. They have two options, Banony or Ashley and Hunter. They are convinced no votes are going to John and all are going to me. Nat has become very close to Hunter in this short time, and I’m aware. She won’t say his name and is considering the potential equalizer of going against a male/male team in an elimination. She made it clear she was playing an honest game… and I took advantage of that.

What this means for Cara and me:

We learned later PaNatalie did indeed vote for John and Sylvia and I did a happy dance in the kitchen. There’s a reason my face has such a smirk in elimination. There’s also a reason BaNony wasn’t voting for anyone. They knew what we did. They knew what I did.

Originally we showed up to elimination where broken contraption sent us back home after the teams ate a bunch of stuff due to fairness. In all fairness, it wasn’t fair… but had the Challenge gods gotten their way, Johnny and Tony were making it to the final… and most likely winning. Rivals 2 pt. 2? I think not!

The next night we returned, and a new battle was set up. This one on a much more level playing field. Props to both teams as I could not imagine enduring what both of them did. Natalie out-spites John, and PaNatalie are the greatest redemption story production could ask for.

We end the episode as the remaining teams meet TJ at the begging of the final. Here he lets us know the rules of the game and the potential f*ckery that could occur. Next week’s episode will be the most entertaining final in history.

Lastly, I feel compelled to share this information as I have a very strong feeling I will be made to look like a goon next week. Upon learning that I made the final, I was overwhelmed with excitement. Due to my excitement I had to tinkle and ventured off to the nearest port-a-potty in the pitch dark. After finishing my victory whiz, I walked out of the toilet and rolled my ankle in a dark hole. Know that going into next week this will not be shown.. and know that next week I will be cursing the grounds that I walk on.

Ps. If you think I’d let Paulie and Cara get away with their shenanigans and NOT say something, you’re dead wrong. Next week, join me, in the season finale, in which I own, and then burn to the ground.