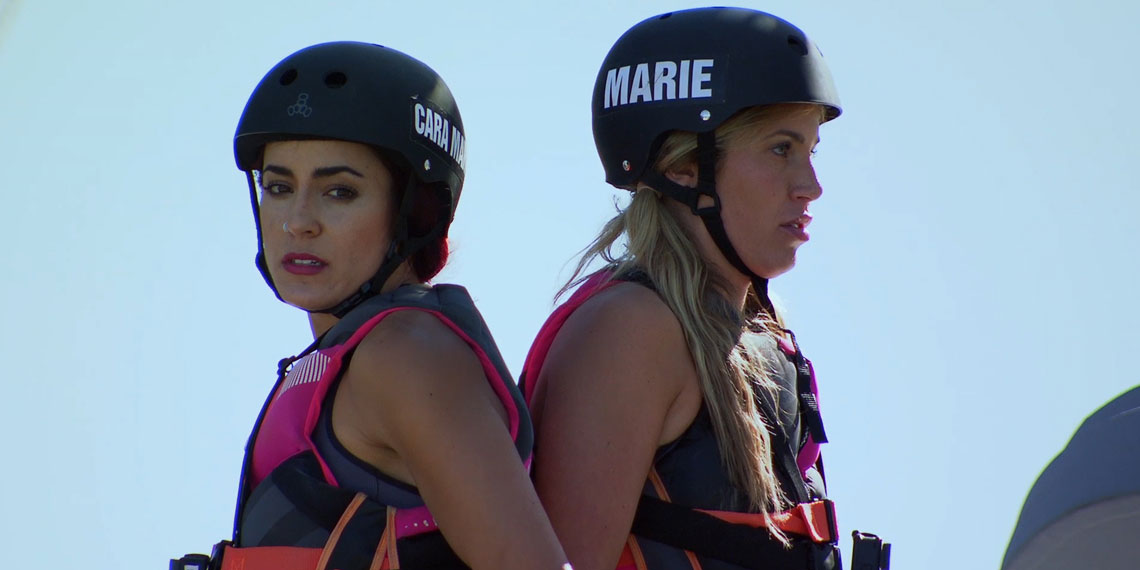 Last week I taught everyone a lesson not to sleep on me. This week on Final Reckoning week 16, we begin with Nelson and Brad trying to teach each other a lesson as well. Brad told Kayleigh he wants to give her toilet paper for all the sh*t she talks, and Nelson wasn’t having it. As a war breaks out after the Redemption elimination (where Natalie and I came through in one of the biggest upsets this season) Nelson continues to beg Brad to spank his ass. Brad drops a bomb comeback: “You line up a motherf*cking fight, and I’ll meet you in your weight class, b*tch!”

I’m just wondering why MTV hasn’t jumped on top of this opportunity yet. “Call the Lawyers.” Give the people what they want! The losing teams head back to Redemption and no one is more excited than Cara to have #PaNatalie back in the house. TJ wasn’t lying when he said I went from “cigarettes and sadness to happiness, and let’s do this!” I’m pumped to be back in the main house. Can’t say the LL’s feel the same.

On the bus to Redemption, Kam takes the opportunity to make fun of the boys’ loss to #PaNatalie. #TeamBB literally spent almost two months in Redemption and their first win came against the so-called “powerhouse” duo that is Kyle and Brad. Kam’s okay with her loss because Cara is a legend, and Brad reminds her that I’m part of that team as well… Since when am I not a legend? Show some damn respect, boys. Don’t make me pull out the toilet paper, Brad.

At the main house, Johnny is super excited to have Natalie back. In true passive-aggressive fashion, Natalie brings up Angela, and Johnny asks, “who?” What you don’t see is Johnny hanging the panties Angela left him over Natalie’s bed. Call me old-fashioned, but this and many other reasons is why I never leave a thong behind. Come on girls, do better.

Outside, Devin and Cory discuss their almost flawless game. Considering they’ve only participated in one challenge thus far, I can’t disagree. We are then reminded of what drives the boys as they plan for their first challenge wins: Devin is here to make his later father proud, and Cory is here to promote Teen Mom. Just kidding. Kind of.

We get another adorable picture of Ryder, Cory’s daughter, and I can hear my uterus sigh. MTV makes parenthood so appealing. Had I known Teen Mom was dropping the “Teen” qualification for the show, I may have never gotten a #Smushmortion. I’m KIDDING. *sweats profusely* Cory and Devin agree it’s best to act oblivious and remain low-key. Good idea. What could PASTAbly go wrong?

We head to the bar/dead restaurant and Cory lets us know DADDY’S EATING GOOD TONIGHT. I’m not usually turned on when someone calls themselves Daddy, but tonight is different. Cory, if you want another baby… I’m potty trained… most nights. We get a quick shot of me and Sylvia talking in the background, and this was actually her apologizing to me. I can definitely hold a grudge, but in a Challenge house, it’s hard to. I may or may not need her allegiance moving forward. There are millions of reasons I decided to let the head-butt go, and they all spell money. Right, Nelson?

On the way home we’re continuing to enjoy our time together… and our leftovers. Within minutes the bus goes from 0 to 100 after Tony decides to throw Cory’s pasta out the window. The girls and I head inside, not knowing how serious this all would end, and I’m pissed I didn’t see it firsthand. Cory blindsides Tony with a backward trip/flip and again, I’m turned on. I guess there’s just something about food fights that get me going.

The house is in a total uproar as both sides plead their case. Devin is sure that they must have slipped and Bananas is positive that they didn’t. The only thing I know is that Shane must have taught Nelson a new word this week. Nelson goes on to use the word “amplify” as many times as possible before the end of the episode. Good job Nelly, but can you spell it?

Johnny brings Tony into one of the interview rooms as the audience gets a behind-the-scenes look into how we do things. Bougie, right? John takes full advantage of being “the victim” and tells us that severe emotional traumas can really bring people together. Shut up. Tony and Cory both head to the hotel and no one knows what’s going to happen. Sylvia embraces her new villain role outside as she talks to Joss about the possibilities of both teams leaving. Why do I get Little Mermaid Ursula vibes here?

Once Tony and Cory leave, John is left alone with the gang mentality that makes up TYB. I’m never one to feel bad for John, but this was so obnoxious. Nelson literally woke our entire room up just to “amp” sh*t up and see John’s veins pop out of his head. Johnny lets Nelson know he doesn’t want to speak to idiots and this cues Devin, “the smart one”, to tap in.

Johnny is getting followed around the house by TYB. Even I’m getting annoyed. You’re not going to hit him, so can’t we all just go to bed? I’m not sure why Devin decides to follow John out to the front of the house since he already lives inside his head, but he does. John reaches his breaking point and hits Devin so low that even Nelson can see it on his tippy toes: “I hope the apple fell far from the tree because you’re a piece of sh*t.” OH, HELL TO THE N-O. It is never EVER appropriate to bring up someone’s deceased family, ESPECIALLY in this situation. #TeamDevin.

The following day John has cooled down and gives a lackluster apology to the camera. Do we believe him? I’m not sure… but I’d like to give anyone the benefit of the doubt when it comes to being such a piece of sh*t. Tony returns to the house hoping for some TYB sympathy, but no one cares. Cory returns to the house and apologizes to Devin. I’m happy we can move past the pasta… turns out, TJ can’t though.

Apparently, this week production doesn’t condone physical violence and Cory and Devin are gone. Can someone say game-changer? I hate to see them leave, but LOVE to watch them walk away. See you in the states, boys! I have a hearty laugh when John asks “who put a knuckle in Joss?” because it’s true. I catch some secondhand embarrassment for Joss but remember he’s beautiful so I don’t feel bad. It’s Challenge time!

Its TJ’s favorite Challenge, Trivia! Typically I’d be excited about something that uses my brain, but these challenges always seem to have some sort of sadistic twist to them. This time, it’s standing 35 feet over water on a plank with a hammer kick to the bottom if you get 3 X’s…wonderful. Last time we did heights over water was the meat challenge. I’m not lying, if you don’t fall perfectly penciled that sh*t hurts and is also extremely dangerous (case in point, Leroy in the Vendetta car challenge). My face says it all as the contraption begins to lift.

I slowly walk out to the plank and begin to cry. This is my “I don’t want to be here” cry and can be spotted every Monday at 8am as I walk into work. Johnny surprisingly tries to calm me down as TJ notices Cara, like a disappointed dad, is NOT feeling this challenge either. Her face is DEAD as she gets up on the platform. I obviously screenshot Cara’s face and immediately set it as her contact picture in my phone.

We begin and I worry these questions were made for Nelson—any idiot can answer them. Me, Johnny, and Paulie all use our first X’s on Sylvia and Joss, and they’re out before they even get a question. Sylvia wonders when she’s gonna catch a break. Cue my eye roll. Quick to forget the head-butting incident, are we? As team #Sloss gets booted into the water the contraption shakes and down goes John. I would have laughed had I not been extremely terrified. Shane and Nelson are up next and use their correct answer to finish off Tony.

Shane and Nelson have two X’s when Nelson can’t remember the name of the elimination ring he fought in, several times, on Dirty Thirty. I’m not surprised and I’m NOT sad. See ya later, hater. Cara and I get ours correct and decide to use it on Ashley and Hunter. In hindsight, we probably should’ve used it on PaNatalie. We were in a much safer position if the opposing side won (they’d probably go for PaNatalie) and wouldn’t choose us to go against. I also believe that Ashley would’ve used her X on PaNatalie because they would’ve just axed her. Lapse of judgment.

It comes down to PaNatalie vs. Cara and me, and I’m praying they get this wrong. If they do, it’s back in our court. My prayers go unanswered as usual when I hear TJ say the word pizza. Paul’s been a super fan of the show and upon meeting him at the airport for departure he said: “You wanna pizza me?” I’m screwed. They answer correctly and TJ seems upset that I’d throw a pizza on Brad and Britni.

I plead my case that I simply delivered it and get rocked to the water. Two months in Redemption, near-death experience, and a pizza question leaves PaNatalie in a power spot. Ashley says she’s worried about their vote. She’s not sure who they’re aligned to, and neither am I. I felt this was worse-case scenario and sulked all the way to nominations.

What happens next? You won’t believe.

Next week’s episode is going to put a HUGE wrench in any Challenge fantasy games out there. Good luck kids, and remember, IT’S NOT ABOUT THE PASTA!