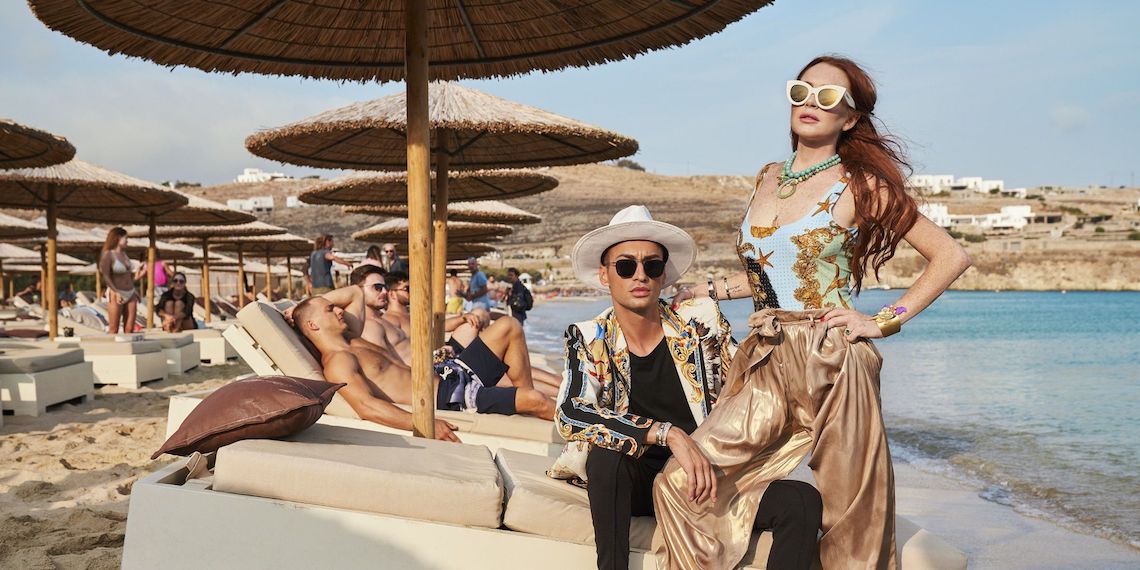 When Lindsay Lohan first announced her new reality show last summer, I’ll admit I was skeptical. Would it be good? Would it ever even happen? Well, the answer to that second question is yes, and in terms of the first question, we’re about to find out. Welcome to the first-ever Lindsay Lohan’s Beach Club recap; I’m sure we’re in for a wild ride.

We open on a moody montage of Lindsay talking about her life. Lindsay has been working for 28 years, and I’m exhausted just thinking about that. Why can’t I disappear and then emerge as a club owner in Mykonos? Is this a career path I can pursue? HMU on LinkedIn if you know of any opportunities.

Now we’re meeting Panos, Lindsay’s business partner and creative director. Panos is “cutthroat,” but he also feels like LiLo is part of his family. Same. Panos is a fabulous Greek man, and you can already tell he wants to be the breakout star of this show.

So the whole premise of the show is that they’ve hired all these “VIP Hosts” from the US to work at the beach house for the summer. The hosts are now arriving, and we see Lindsay telling Panos like they’ve never discussed this before. It is 100% scripted, and I don’t even care. Oh reality TV, please never change.

Michael: “I’ve woken up in celebrities’ beds before.” Mike is bisexual, so I’m sure he’ll get in plenty of trouble this season.

Jules: Jules has experience as a “model marketing server,” so she’s not a bartender, just a hot girl who gives people their drinks. Sounds legit.

Brent: The token douchebag. His friends call him the “waitress slayer,” because he’s been fired for sleeping with everyone in the past.

Aristotle: Tbh, Aristotle is barely in this episode, and I can’t tell you anything about him, other than that he’s a snack.

Billy: Billy believes that, as a VIP Host, “You’re essentially a therapist for these people.” Oh no, honey no.

Gabi: Gabi shows up with blue hair, and she like to have a good time. “On a typical day she’s on top of the bar taking shots,” so I’m sure that’ll go over well with Lindsay.

Jonitta: She’s super pretty, kind of like Jordyn Woods, but with a job.

May: May tells us right away that she flirts with her clients, which I think is kind of implied in all of this. But good job May, thanks for being honest.

Staff Meeting #1: Panos is running the show, and he makes it clear that their job is to sell as much expensive sh*t as possible. Jonitta stupidly asks if they’re only going to be judged on sales, to which Panos replies “You’re going to be judged on everything, don’t worry.” All of these kids are like thank you Panos, but can we please meet Lindsay. Panos tells them to “Go back to the villa and rest up for your meetings with Lindsay tomorrow,” as if they have a half marathon in the morning.

At dinner, we quickly establish that everyone is single, clearing the way for this season to get spectacularly messy. Brent wastes no time, saying that blondes aren’t his cup of tea, and quickly turning his attention to Sara. He calls her “exotic,” and I fully want to crawl in a hole and die. Cut to her confessional, where she says he’s not her usual type, because he’s not a basketball player or celebrity. I have this same problem all the time.

They’re all partying in the pool after dinner and Lindsay and Panos show up unannounced in a Mini Cooper. This cannot end well. Lindsay acts like she just walked in and found a dead body in the pool. They’re just pounding some shots on their first night in Mykonos, give them a break. Apparently this is the perfect time to do introductions with Lindsay, because these producers are shady AF.

Gabi gets put on blast for only being in a bra at this impromptu meeting. Lindsay says “It’s like me going to meet Steven Spielberg in a bra and wet hair.” Lol at LiLo acting like she’s had any prestigious Hollywood meetings since 2005. Gabi is then told that she must dye her hair pink because the DJ already has blue hair, and according to Panos, “they’re not Avatars.” Panos is already more than I can handle, and I love it.

Jules moved back to Denver and is ready to “spread her wings and like whatever.” I think she’s looking for the word “fly,” but I can’t be too sure. Lindsay asks if she’s Buddhist (hard no), which is the perfect segue for Lindsay to talk about meditation. God, she’s crazy.

Lindsay then asks what Gabi would do if she and another girl liked the same guy. This seems like a completely inappropriate boss/employee conversation topic, but I guess the ~Lohan Brand~ hasn’t invested in an HR department yet. Lindsay is worried that Gabi isn’t here for the right reasons, and Gabi responds by admitting she’s there because she’s selfish. Lindsay claims Gabi wants her own show, and storms off.

After Lindsay leaves, the Hosts establish some house rules:

1. The smoosh room is open to everyone.

Oh wait, that was the only rule they said. Should be a fun time.

Now Lindsay is with Panos, and she’s crying. She’s still stressed about Gabi trying to take advantage of her. “I have no emotion when it comes to money and business.” Look, it’s 2019, can we stop talking about emotions like they’re a problem? Okay, this is actually sad. A few years ago, Lindsay’s ex hit her on the beach in Mykonos, and she vowed that instead of giving up, one day she would own that beach.

Now it’s the first day at the beach club, and Panos is mad that they’re late. Brent immediately gets in trouble for wearing a white blazer, and now he’s whining because he’s obviously the most stylish. How many episodes before Brent does something stupid and gets fired?

Lindsay has some rainbow eyeshadow going, and it is, um, a choice. She looks like she went to EDC a week ago and hasn’t washed her face since. She says she’s worried about looking old, so maybe she should try some makeup that doesn’t look like she got beaten up by a clown. I truly want the best for Lindsay Lohan, and this makeup situation is far from the best.

Our featured VIP client today is a model named Natasha, and Brent is assigned to be her b*tch for the day. Natasha obviously wants to f*ck Brent, which is annoying AF. He takes her swimsuit shopping across the street (normal), and then we see them fully making out in the cabana. Am I unclear about what VIP hosts are?? Is this a show about prostitutes?

It’s 7PM, and Panos is mad. Jonitta is lying down, wasted and the other hosts are just grinding on each other and ignoring the clients. Back at the house, Jonitta yells at Brent for not working hard enough, just seconds after we saw her drunkenly rolling around on a daybed. I love this sh*t already.

Staff Meeting #2: Panos is wearing a bright orange baker boy hat. I’m obsessed. He applauds Brent for being a manwhore, and calls Jonitta the weakest link. The 2020 election might be heating up, but I’m mostly here for Brent vs. Jonitta.

I’ll be honest, this was a wild ride. I enjoyed it more than I was expecting, and I’m very excited to see what this season has in store!