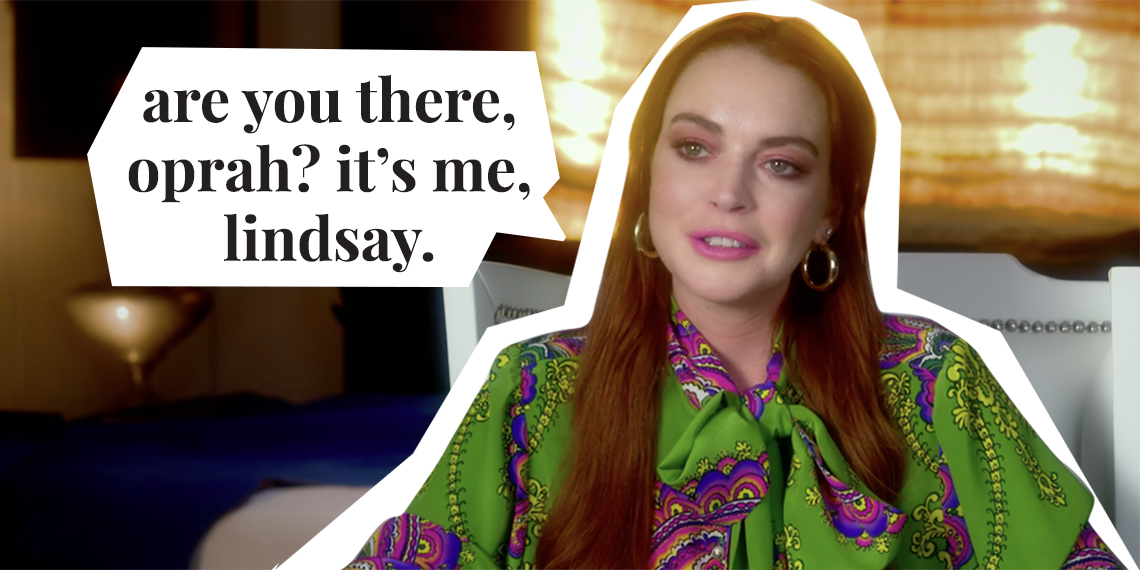 It’s been a week since our first taste of Lindsay Lohan’s Beach Club, and I’m ready for more. Seriously, so many people have asked me about the show in the past week that I really haven’t stopped thinking about it. What will happen tonight? Will the Beach House turn into a prostitution ring? Will Lindsay’s Turkish accent truly come out? So many possibilities.

All of the ambassadors are getting ready and talking about how they want to learn as much as possible from Lindsay. They’re acting like Lindsay is a life coach and not a ticket to Instagram influencer status. This should be a good episode, I can feel it in my bones.

Lindsay says that, “after a rough start,” she’s ready to get down to business. Oh, you mean when you showed up unannounced on the first night, and were appalled that your employees were drinking the booze you gave them? Okay. She’s making them all write their intentions on pieces of paper, and Lindsay is acting like she’s leading these people through a 12-step program. We only hear three people’s intentions, but two of them are “Grow the Lohan brand,” so Lindsay is happy. We find out that Oprah is Lindsay’s “911.” She asks Oprah for advice whenever she does anything. Unclear whether Oprah responds to these manic texts.

It’s a new day at the Beach House, and today’s VIP client is Lakis, a designer who shows up carrying two small dogs and wearing the largest sun hat I’ve ever seen. Aristotle is assigned to the VIP today, because Panos wants him to get over his social anxiety. Okay, we’ve seen Lakis for a total of ten seconds, but I can already tell he’s the absolute worst thing you could do to a person with anxiety. Panos tells Brent that he’ll be assisting Aristotle, and he argues that he should be working the door. Panos tells him not to talk back, and there’s immediately drama brewing. Brent’s ego is already my third favorite character this season.

Lakis wants his feet washed with hot towels, so that’s how this is going to go. He makes Aristotle “dance” with him, which consists of some weird acro-yoga poses that definitely aren’t safe. Brent is embarrassed by the foot washing, and decides he’s done helping Aristotle. Lindsay immediately notices, and she’s not happy about it. We see Aristotle wandering around looking for Brent, and the other Ambassadors are just sitting around eating French fries. Do these people have a job?

Now that he’s left his job responsibilities behind, Brent is back to focusing on getting laid. He says he “feels substance with Sara,” and “could definitely see a future with her.” Brent, you’ve been here for three days, and you spent one of those days hooking up with Natasha the VIP client. This isn’t The Bachelor, chill out.

Aristotle sits down with Panos to talk sh*t about Brent, and Panos is not happy. Aristotle then goes to talk sh*t with Lindsay, and she’s mad too. Okay, so Brent is obviously a douche, but doesn’t Aristotle still have a client to worry about? Apparently snitches don’t get stitches at Lohan Beach House. Lindsay threatens to send Brent home, which obviously won’t happen, because we still have a 10-episode season to get through.

And now we’re back at the Host villa for the night, because these people only work for like four hours a day. Oh hey Billy, forgot you existed! He gets in some hot tub time with Sara, so he’s obviously gonna have beef with Brent.

They start a game of Truth or Dare, which Aristotle kicks off by doing a naked lap around the backyard. Let’s hope Lindsay doesn’t pull up in her Mini Cooper right now, because she would be sorely disappointed. Brent asks Sara which girl she likes the least, which is her opportunity to stir the sh*t with May again. Oh wait, no, Brent decides to go in on May on her behalf. Classy.

Billy to Brent: “I dare you to try to go tomorrow without calling somebody out on their bullsh*t.”
Me to Billy:

This is the content I’m here for, thank you Billy.

OMG. Billy is talking to Sara, and Brent pops his head in and goes “Am I interrupting?” He seriously thinks he’s on The Bachelor. Sara then sits down with the girls to talk about her predicament. She’s more into Billy, but she likes the attention from Brent. Honestly, as someone who loves attention, I respect this.

Jules (the blonde one who we haven’t seen at all) immediately tells Brent about what Billy said to Sara, and it goes exactly as well as you’d expect. Brent screams for Billy to come outside, and then says that they’re living in A HOUSE OF UGLY GIRLS. OH MY GOD, NO. He just called them all 2s, which is 1) untrue, and 2) so incredibly, unbelievably rude.

All the women are eavesdropping on this sh*tshow, and Jules comes over to break the tension. He says back home, he’d maybe talk to Sara if she weighed seven pounds less. Sir, you were saying you see a future with this woman literally six hours ago. Jonitta and Sara then come over and dump a bunch of drinks on Brent’s head. THIS. IS. EVERYTHING. The women are totally bonding over this, and I’m completely here for it.

Meanwhile, it’s 11:30pm at Lindsay’s villa, and she’s cooking fish for dinner. Her friend calls her Martha Stewart, to which she responds “I’m not Martha Stewart, I’ve already been to jail.” God bless.

Back at the Host villa, Brent is chugging tequila out of the bottle, while everyone else literally begs him to stop drinking. Brent passes out on the living room floor, and then suddenly he’s throwing up on the side of the road. Does the house not have toilets for throwing up? Why are you in the road??

The next morning, Panos puts Brent in his place for abandoning Aristotle the previous day. Brent then calls Panos “buddy.” 30 minutes have passed, and Brent’s ego is now my least favorite character, in case you were wondering.

Brent requests a one-on-one with Panos, and he’s acting like he is totally running the show here. Sorry Brent, but the floral romper Panos has on is clearly the star of this scene. Panos FaceTimes Lindsay, and he has to remind her who Brent is. I’m screaming. It’s only the second episode, and we’re already having to rely on FaceTime to get Lindsay on camera. It’s going well!