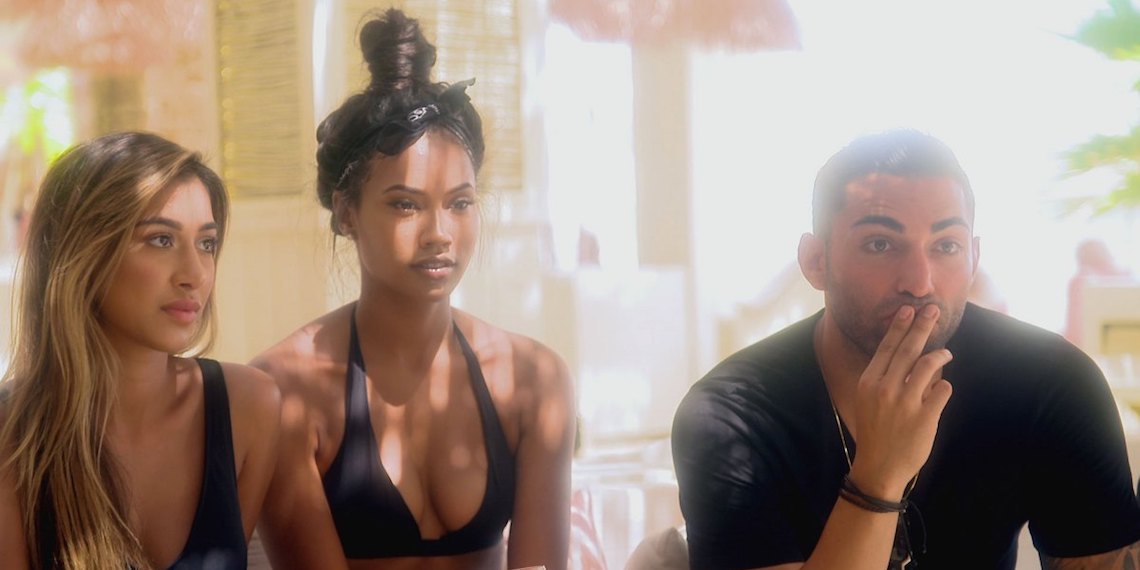 Welcome back to another sunny week at Lindsay Lohan’s Beach Club. The sun is shining, the cabanas are empty, and Brent is probably still an asshole. I’m sure there will be plenty of drama on Mykonos tonight, so let’s get started.

It’s a new day at the club, and all the hosts say they want to leave the drama back at the house. Famous last words. Lindsay shows up to the staff meeting and brags that she got to work at 9am today. Glad to know her greatest achievement is the bare minimum I have to do to not get fired. Lindsay tells the Hosts that Alesso is coming to the club, so everyone will be on high alert. She then announces that there will be a new Ambassador coming soon, and Sara uses the word “shook” twice in one sentence. Honestly, Brent is the only one who’s not shook, because he apparently forgot he got in a fight with his boss yesterday.

Panos asks Jules if she wants to serve Alesso, and of course she says yes. Then Panos goes “No, I don’t think so,” and gives the job to Brent and Jonitta. Excuse me? If my boss pulled that sh*t with me, there’d be an HR complaint filed 10 seconds later.

Brent thinks he still has a chance with Sara after he called her the gum on the bottom of his shoe and she dumped a drink on him. We see footage of him apologizing to her, and she’s like, “I’m just over it all.” He thinks everything is good and hopes they can still go on a date. The lack of self-awareness is astounding. We also find out that Natasha, the VIP that Brent made out with, is coming back to the club, and now Brent feels awkward. He doesn’t want to make Sara mad, so he’s just gonna ignore the VIP client. I’m sure Panos will love that.

Mike and Jules immediately go hang out and flirt in the ocean, which is exactly what Panos told them not to do. Jules is here for a good time, not a long time, but there’s definitely going to be trouble.

Brent and Jonitta sit down to figure out a spa menu for Alesso, which seems like it shouldn’t be their job, but whatever. Jonitta finds some fancy Himalayan salt in the kitchen, so I’m sure everything will be fine. Natasha shows up, and she immediately requests that Brent come say hi to her. Brent acts like a little f*cking baby, and refuses to come at first. Then Panos has to force him over, and it’s literally the most awkward hello I’ve ever seen. Mike says that Brent needs to “nut up or shut up,” and I just spit out my drink.

Alesso shows up, and he has a swollen foot. Lindsay goes full Red Cross nurse, wrapping a bandage around it and barking orders in her fake Russian accent.

Lindsay’s Accent: DON’T LET HIM TAKE THAT OFF
Me:

Brent tells Sara about what went down with Natasha, and Sara literally could not care less. I’m glad to see Brent is tanking his job to impress a woman who doesn’t want him. It’s what he deserves.

Lindsay tells us that her biggest fear in life is being judged. Does she not remember that she literally tried to kidnap children on Instagram Live? She’s waltzing around the club with a machine gun that shoots champagne, and I have several thousand questions. She lines up all the VIP Hosts and shoots them with the champagne, and all the women are very stressed about getting their hair wet. It’s a tough life here at Lohan Beach House.

It’s the next day, and the VIP Hosts have the whole day off. So much time for activities! Sara tells Jules that she’s forgiven Brent, but I have one major concern. Sara keeps calling him “Brett,” and I really don’t think she knows his name. Panos calls Mike to tell him that the new Host, Alex, is someone he knows from back home. Mike is like, “Oh yeah, Alex, from work,” and then tells us that he and Alex have definitely f*cked. But now Alex has a boyfriend, and Mike is into Jules, so I’m sure this won’t cause any drama!

Narrator: It would cause drama, and lots of it.

Suddenly it’s 10pm, which makes sense because I fully believe that these people slept all day. They go to dinner, and Mike drops the bomb about the new arrival. They stress for like 30 seconds, then hit up the club. While Mike and Jules are making out, Brent takes Sara and Jonitta to Alesso’s show at a different club. Panos sees Jonitta promoting Lohan Beach House, and is immediately impressed. Panos acts super tough to please, but the bar has been set, like, very low for these people.

No. NO. NOOOOOO. Brent asks Sara to be his girlfriend, and I have never been more angry. She doesn’t really say yes, but she continues to flirt and dance with him. SARA. 48 hours ago, this man called you a two. A TWO.

Alex arrives the next day, and he has the bluest eyes I’ve ever seen. Mike picks him up at the airport, and then brings him back to the house to meet everyone. Jonitta says he’s the hottest guy she’s ever seen, and the women are heartbroken when they find out he’s gay. Jonitta tells him immediately about how Mike and Jules have been flirting, but Alex says he’s here for work and won’t get involved.

Alex: I’m not getting involved in the drama.
Me:

Aaaaand Alex doesn’t take Mike’s bisexuality seriously. I’m sure this is the last we’ll hear of this.

Back at the club the next day, Panos immediately compliments Jonitta, because there’s a first time for everything. The VIPs today are four Italian women with millions of followers, and the guys are assigned to serve them. Panos also calls Brent out for acting like a couple with Sara, and asks him to end the relationship on the spot. He doesn’t really answer, but Panos is not happy. Brent’s job for the morning is handing out fliers to convince people to come to the club on Monday, and he’s livid. Sorry, but I’ll watch Brent do “peasant work” any day.

The Italian VIPs show up, and Alex, Aristotle, and Brent are working with them. Alex is killing it, partly because he speaks Italian, and partly because he’s willing to make out with the girls. Panos and Lindsay are obsessed with him, and all the other Hosts are scared sh*tless. Will someone get sent home? I guess we’ll find out next week!